Why the Platinum Peak Could Be Behind Us
By Steve Sjuggerud
Thursday, November 21, 2019

If you want a near-guaranteed way to generate poor returns, this is it...

I've spent more than 20 years investing. And I've found that betting with the crowd almost never wins. In fact, I've spent my career trying to do the exact opposite. That's how you really make money.

Longtime readers know that mom-and-pop investors tend to buy at the worst possible moments. They sit on the sidelines through most of the rally and then pile in at the end... once the rest of the crowd has done the same.

This happens all over markets, from stocks to real estate to commodities. And we're seeing this setup play out right now in the precious metals market, too.

Platinum rallied more than 25% from its bottom in August 2018 to its peak in September this year. Now, the crowd is piling into the trade. And according to history, that means the top could be in.

Wild levels of investor sentiment can give us incredibly valuable information. They tell us when an investment is too loved or too hated... and that, in turn, tells you to buy or sell.

One fantastic source of sentiment data is the Commitment of Traders ("COT") report. It's a weekly report that tells us what futures traders are doing with their money.

This kind of real-money indicator is as good as it gets in the sentiment world. And it's a great contrarian tool when it hits extreme levels.

The simple truth is that when futures traders all bet in one direction, the opposite is likely to occur. And that's exactly what we are seeing in platinum today.

After a strong rally in 2019, bets on higher platinum prices hit a multiyear high. In fact, we've only seen levels this high three other times over the last decade. Take a look... 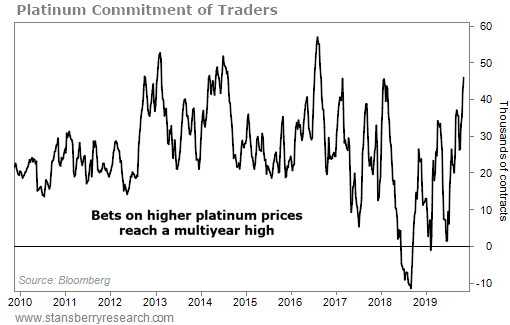 Futures traders are all betting on higher platinum prices once again. And those bullish bets recently hit their highest level in roughly three years.

We've only seen sentiment get this bullish three other times over the past decade. Similar cases happened in 2013, 2014, and 2016.

Each time, platinum prices dropped over the next year. And the overall losses were substantial. Take a look...

Futures traders went all-in on platinum prices at the worst times back then. And they lost double digits over the next year in each case.

Platinum has already pulled back since peaking in September. But with bullish bets at multiyear highs, prices could fall much further.

Don't make the mistake of getting caught up in the crowd. Futures traders are wildly bullish. And that means the top could already be in for this precious metal.

"It's not the high-flying tech sector," Chris Igou writes. "It's actually about as dull as it gets." The big gains may be over for platinum, but this boring sector is still rising. And with the trend in place, there may be more upside on the way... Read more here.

"The ideal time to go against the crowd is when all of the crowd is doing exactly the same thing," Steve says. Wall Street professionals are ignoring an important anomaly in the market. And worse, they're telling ordinary investors to do the same... Learn more here.

Market Notes
AN 'OFFENSE' CONTRACTOR WITH A STRONG UPTREND

We’ve often mentioned that the U.S. government spends a fortune on conflicts overseas… so much, that defense contractors might as well be called “offense” contractors. After all, America keeps about 200,000 troops stationed abroad. And those troops need equipment and weapons. Today’s company provides ships for our armed forces…

Huntington Ingalls (HII) is America’s largest military shipbuilding company. Its Newport News and Ingalls shipbuilding facilities have built more ships than any U.S. naval shipbuilder.  The company just released third-quarter results, with revenue of $2.2 billion, up 6.5% from the same period last year. It also recently delivered a new fast-attack submarine to the U.S. Navy. And as America maintains its forces abroad, orders for ships should keep rolling in…

As you can see, HII shares have risen sharply in recent weeks. They’re up around 23% over the past year, including dividends. And as the government continues to support military efforts abroad, that trend should continue… 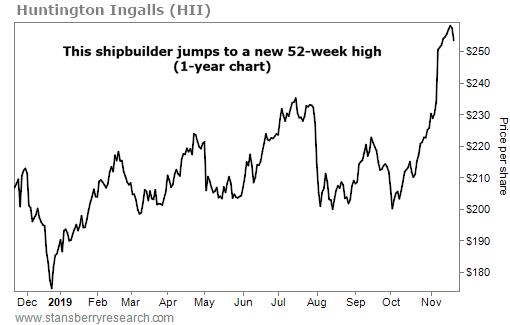