Why the Rally for Bank Stocks Is Just Beginning
By C. Scott Garliss
Tuesday, October 25, 2022

The Federal Reserve is on a mission. It's hiking rates at a breakneck pace with a single goal... getting inflation under control.

Unfortunately, it has to cool down the economy to do it. And that's putting stock and bond prices under pressure. Just about everything is falling due to the Fed's actions. But not every asset will end up a loser.

In fact, one corner of the market will earn big profits from these interest-rate hikes. And while this sector has taken a hit so far this year, a long-term rebound could be on the way.

Banks are the real winners from the Federal Reserve's interest-rate hikes...

The Fed is trying to stabilize prices by strengthening the dollar. But in the process, it's driving up the cost for home loans – as I covered yesterday.

The change is a windfall for lenders who have been starved for years. When interest rates were at historic lows, it was a challenge for banks to make more net interest income ("NII"). NII is the difference between what banks take in for loans and what they pay out in liabilities. 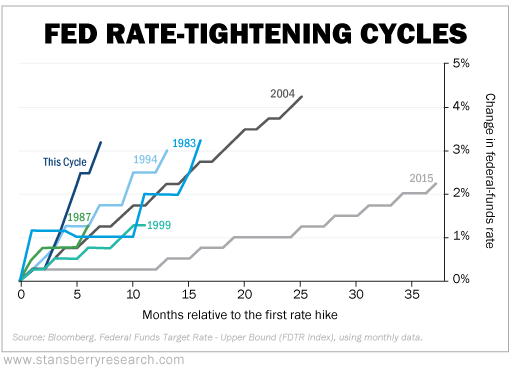 This quick move in interest rates has wreaked havoc on asset prices. But it's putting money back on banks' balance sheets...

Just look at JPMorgan Chase's third-quarter results. Earlier this month, the firm reported record NII of $17.6 billion, up 34% year over year. It also expects total NII for the year to be $61.5 billion, compared with its expectation of $58 billion last quarter.

And this story isn't over... The Fed has said it's going to raise rates another 1.5% by next March. That means banks are going to make even more money on loans.

This should be a long-term tailwind for the banking sector...

The rate on a conventional 30-year mortgage sat around 2.7% in December 2020. At the time, the economy was trying to recover from COVID-19 lockdowns. The Fed needed to keep monetary policy loose so banks would lend... And it needed cheap money in the system so households and businesses would want to borrow.

But that easy money – plus another $2 trillion of government spending – overheated the economy. The only way to change that was for the Fed to start tightening.

This means banks are about to see higher NII than anyone expected at the start of the year.

The financial sector has fallen more than 20% from the beginning of 2022 to its recent low. But these stocks have turned higher in recent days... And investors should expect more upside from here.

As long as rates stay high, it will be a massive tailwind for the sector.

Mortgage rates have soared as the Fed fights inflation. That's bad news for homebuyers... But it's another reason banks are pulling in more cash today. Learn one way you can bet on this long-term trend in Scott's related piece: High Mortgage Rates Are a Win for Banks.

As prices rise throughout the economy, consumers are looking for ways to save money. Another group of companies is thriving as a result – and one stock you might not expect is soaring above its peers... Read more here: This 'Money Saver' Is Outperforming in the Inflation Era.