Why This Investing 'Oracle' Is Hoarding Cash Now
By Justin Brill
Saturday, August 31, 2019

Regular readers know I've been pointing to signs of trouble in the markets lately...

Some of these include a tremendous bubble in government bonds, rising defaults in the consumer and corporate debt markets, and most recently, an "inversion" in the U.S. Treasury yield curve (more on this in a moment).

And as you may have grown tired of hearing... one of the best and easiest ways to protect yourself is to simply hold some extra cash – generally through FDIC-insured bank or brokerage accounts or short-term U.S. Treasurys.

This advice isn't exactly popular... and it's certainly not sexy. But if you take this step today, you'll be in good company...

Even most novice investors are familiar with Warren Buffett...

Through his holding company Berkshire Hathaway (BRK-B), the so-called "Oracle of Omaha" has delivered investors an average annualized return of more than 20% over the last 50-plus years.

That's enough to turn every $100 invested into more than $2 million.

Buffett hasn't been shy about sharing his feelings about the U.S. stock market, particularly over the past 10 years...

He famously penned a New York Times op-ed in October 2008, during the peak of the great financial crisis. He told readers he was personally buying U.S. stocks for the first time in years and urged them to do the same. And he's appeared in the financial media countless times since, continuing to praise the opportunities in U.S. equities.

But in the past year or so, Buffett has slowed his "cheerleading." He's not actively warning about the market yet – like he did in the run-up to the 2000 dot-com crash. But we believe his actions speak louder than his words...

You see, Buffett is holding a huge amount of cash right now...

As our colleagues Ben Morris and Drew McConnell noted to their DailyWealth Trader subscribers on Tuesday, Berkshire Hathaway was holding a record $122 billion position in cash at the end of last quarter.

This massive cash hoard works out to more than 50% of the value of Berkshire's entire portfolio of public companies. In other words, Buffett already has more than a third of his portfolio in cash. The only time it's been higher was right before the financial crisis.

Ben and Drew explained that this is as strong of a warning as you're likely to get from one of the world's greatest investors...

Clearly, Buffett doesn't see many [great opportunities in stocks]... If you want to follow the ultimate guru's lead, you should hold plenty of cash today.

Why is Buffett so concerned?

I can't say for certain. But one telling factor may be that his favorite market valuation metric – total market capitalization-to-gross domestic product ("GDP") – sits at more than 150% today.

Of course, this is only one indicator. But by this measure, the broad market is currently more expensive than it was at either of the last two bull market peaks in 2000 and 2007.

Elsewhere in the markets, one of the most reliable "early warning" signals continues to flash...

Earlier this month, we noted that the most-widely followed measure of the U.S. Treasury yield curve – the difference (or "spread") between the yields on 10- and two-year U.S. Treasury notes – had dipped below zero for the first time in more than a decade.

Since at least 1950, these "inversions" have predictably been followed by recessions and bear markets several months later.

If there was a silver lining, it was that this inversion was brief... The "2-10" spread fell to negative 0.02% the morning of August 14, but it closed the day back above zero. Typically, this spread has dropped well below zero for several days or weeks before triggering a clear "countdown" signal.

Unfortunately, the spread didn't stay in positive territory for long...

It inverted again on Monday, closing below zero for the first time. On Wednesday, it closed at a new decade low of negative 0.05%. And it remains in negative territory as I write.

Given this news, we're not surprised to see precious metals doing well...

Despite plenty of signs that both gold and silver are due for a "breather," both metals remain near multiyear highs.

They're also continuing to do well outside the U.S.

The last time we discussed the yield curve, we noted that gold had already broken out to new all-time highs in several major currencies, including the British pound sterling, the Australian dollar, the Canadian dollar, the Swedish krona, and the New Zealand dollar, among others.

We also showed you gold was close to making a new all-time high in the euro, the world's second-most important currency behind the U.S. dollar. Well, as you can see in the updated chart below, as of Thursday that record has fallen, too... 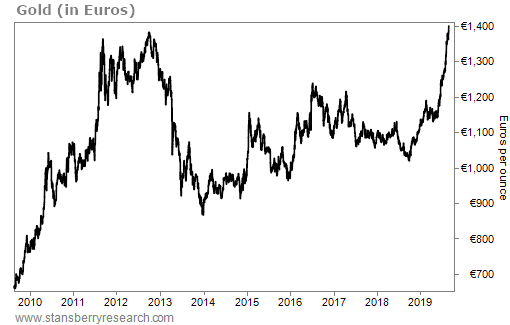 We said it before, and we'll say it again...

This is a big deal.

Gold and silver have broken out to multiyear highs here in the U.S. But as bullish as this price action has been, it's not the whole story.

This latest rally has been a global phenomenon... And it suggests it is simply a matter of time before we see new all-time highs in gold and silver here in the U.S. as well.

Again, we're sure to hit sharp corrections along the way... We're probably overdue for one right now. But history says significantly higher prices are likely.

Of course, if you tuned in for our special gold event with legendary analyst John Doody last week, you know that when gold and silver move significantly higher, the best gold stocks can absolutely soar.

When it comes to making money in gold and silver stocks, there's simply no one better than John. Click here to learn more about his excellent service.

Editor's note: You want to own precious metals now... but John says the right gold and silver stocks could perform much better. In fact, he's predicting you could make up to 20 times your money during the current boom – if you know what to do. Right now, you can get a full year of his gold and silver research at more than half off the normal price... But the clock is winding down on this offer. Click here for the details.