Why You Shouldn't Bet on an Oil Bust
By Brett Eversole
Tuesday, July 12, 2022

It has been soaring most of the year, up nearly 50%. Yet that hasn't stopped it from staging brutal sell-offs along the way.

That's a swift 20%-plus decline in no time flat. And investors are betting the losses will continue.

There's a good chance they're wrong, though. Betting that oil prices will keep falling is the crowded trade today... And that's why the recent sell-off isn't likely to continue.

Traders in the oil market should be euphoric right now.

Prices have gone up, up, up. Predictions that oil will hit $150, $175, or even $200 per barrel are becoming mainstream. You'd think folks would be piling into the trade, expecting more gains to come.

Instead, everyone's betting the trend is dead.

That's according to the Commitment of Traders ("COT") report for oil. This weekly report shows what futures traders are doing with their money. And it has a history of being a strong contrarian indicator.

You see, these folks tend to pile into an asset after it has already boomed. And once that extreme optimism takes hold, losses are almost certain to come.

This isn't what's happening in oil, though. Instead of getting bullish as prices rise, the COT report shows massive numbers of folks making bets against oil. Heck, traders haven't been this bearish since early 2019. Take a look... 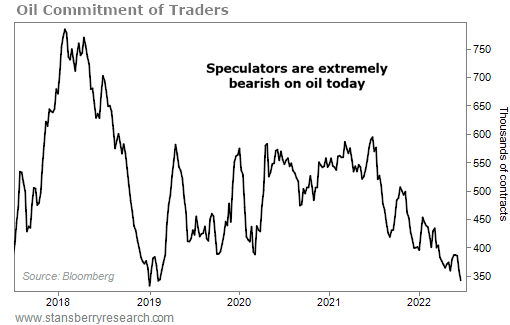 This extreme pessimism isn't what we would expect right now. But regardless, it tells us oil prices can continue to rally.

Again, the COT report is the most bearish we've seen since 2019. Oil had just finished a crash back then... dropping roughly 40% in only a couple months. Futures bets hit a multiyear low. And I'm sure you can guess what happened next...

Oil rallied. It jumped more than 20% in just two months after the COT hit bottom.

We saw the same thing happen after the COT hit a multiyear low in 2016. That was after an even worse oil bust...

Oil prices had dropped more than 70% in less than two years. It was a bloodbath. And traders were scared silly. If you were a contrarian, though, it was an incredible opportunity...

COT sentiment bottomed in early 2016. Oil prices were below $30 per barrel... But by the end of the year, oil had nearly doubled.

This is how the COT tends to work. Prices crash... Speculators get scared... Then, once there's no one left to sell, prices soar.

The contrarian bet is for oil prices to continue higher. Sure, we saw a big sell-off in recent weeks. But until this bearish sentiment turns around, you shouldn't expect an oil bust. Instead, higher prices are likely.

"Folks tend to be most afraid when things are at their worst," Brett says. And that's what we're seeing today as inflationary pressure weighs on individual investors. But if we stay patient, we could make outsized returns once the trend reverses... Learn more here.

Most folks are reluctant to invest right now amid ongoing uncertainty in the market. But history shows this could be a setup for massive gains once the turnaround begins... Read more here: Investor Bullishness Just Hit a Decade Low.