Home prices have soared 16% over the last year.

It probably makes you feel like it's the mid-2000s again. That was the last time housing felt this crazy. And it was obviously a time of excess in the market, as prices rose much faster than what was sustainable.

It all ended with a massive collapse. And I understand if you're worried about that happening again. But things are much different now, as I'll explain today.

Not only have home prices risen less in recent years than you probably expect... but housing is also still affordable. And those two pieces mean this seemingly crazy boom can continue.

There's no question, the U.S. housing market is hot right now. But importantly, the median sale price for homes sold in the U.S. is only up 11% from its 2017 peak. Think about that... Prices have risen just 3% per year over the past few years.

That's slower annual growth than much of what we've seen throughout history. Take a look... 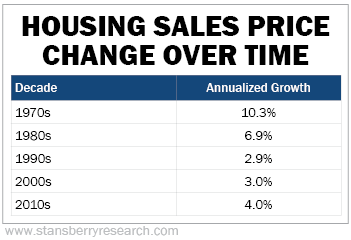 Here is the price change per year of the average home sold in the U.S., separated by decade. These numbers might not seem huge, but housing doesn't typically soar in double-digit percentages each year.

The 1970s bucked that trend. The U.S. had a high rate of inflation back then, and we see that reflected in home prices, too. The 1980s saw fast growth as well. But after that, we have three decades that show us a pretty consistent pattern...

Home prices tend to rise 3% to 4% per year. What we've seen in recent years is simply on trend. And it took the hot market to even catch up to those levels.

So yes, the market is hot... but no, the biggest price increases aren't behind us. Housing can keep soaring from here.

If you still don't believe that, you have to consider something else: housing affordability. The reality is that record-low interest rates have kept housing affordable even as prices soared.

You can see it in the chart below. It shows housing affordability, which takes incomes, interest rates, and home prices into account. A high level means housing is more affordable... 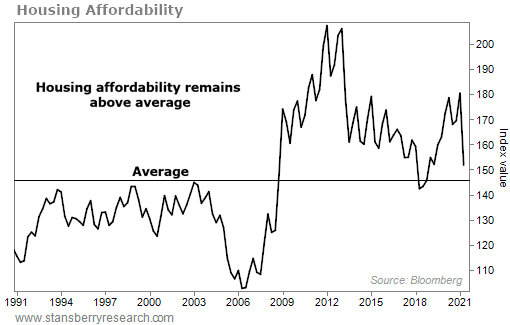 That tells us that housing is actually darn affordable throughout the U.S. today. And despite a recent fall, we're still above the long-term average.

This paints a picture that few see in housing today. Yes, prices have soared... but they've simply been playing catch-up. And despite those increases, homes are still affordable.

That's why this time is nothing like the mid-2000s. And it's why the rise in home prices doesn't scare me. Instead, the smart bet is that those gains will continue.

P.S. Everyone seems to get this story wrong... And that's setting up the biggest anomaly in finance that I see today. Taking the other side of the fear-based bet is the top investment opportunity that I see for this decade. And since the story is so poorly reported, I recently sat down to set the record straight. You can see my full presentation, for free, right here.

"The pandemic revealed a major imbalance in the American housing market," Steve writes. We simply haven't been building enough homes in the U.S. And that gives us a clue about how long this current housing boom could last... Read more here: The Reason Housing Will Keep Booming.

"Low taxes, warm weather, cheap housing... what's not to like?" Chris Igou says. The pandemic has accelerated the trend of people moving from big, expensive cities into cheaper parts of the country. And it could be the beginning of a generational shift... Get the full story here.

Today, we’re checking in on one of the biggest names in entertainment…

Streaming services were already conquering the world of television – then, they took off during the pandemic. With people stuck at home, companies like Disney (DIS) and Amazon (AMZN) swooped in, making more movies and TV shows available to stream over the Internet. Today’s company is another leader in this trend…

Netflix (NFLX) is the world’s largest streaming service. It provides its almost 210 million paying members with an extensive library of TV shows, movies, and documentaries… And it’s even developing its own original content. As more people choose streaming over cable-TV packages, Netflix continues to pull in big sales… In its second quarter, Netflix’s revenue increased 19.4% year over year to $7.3 billion.

As you can see, shares of NFLX have absolutely soared over the past five years. They’re up more than 520% and just hit a new all-time high. Streaming services aren’t going away anytime soon – so this stock should keep heading higher… 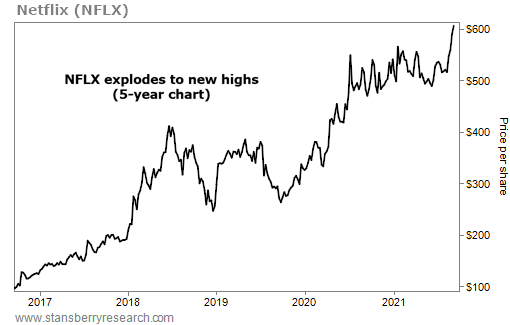