Steve's note: Regular readers know I don't write much about cryptocurrencies like bitcoin. But I know the value of investing in hated assets – finding the moment before folks start piling into an opportunity. My colleague Eric Wade says bitcoin is still not overly loved today. And he believes the biggest gains are still to come...

Yesterday, I shared how back in 1994, I made life-changing gains on the sale of a simple domain name... wallstreet.com. My partner and I got a million dollars out of the deal.

I knew it was rare to find even one winner like that in my lifetime. But that never stopped me from continuing to hunt for a second... and maybe even more than that.

For a long time after selling wallstreet.com, I dabbled in tech startups and the music business...

I sold another domain for a 148,000%-plus profit in about eight years... a 1,000-bagger, on a word I completely made up. I even took some time off to write screenplays, one of which I sold to Adam Sandler. (He later shelved it, but I'm still hoping it'll see the big screen someday.)

Everything I did in my career involved technology, investing, or both. I explored, experimented, and tested... doing everything I could to find the next multibagger opportunity.

I had seen the types of catches you can make in the deep, blue ocean. I wasn't going to go back to the local pond. And then after more than a decade of searching, I hit pay dirt...

In 2009, a new technological force quietly hummed to life. It brought a brand-new form of money into the world...

I'm talking about bitcoin. It's an investment with the same ingredients I used to make revolutionary gains back in 1994. Today, I'll show you why.

Now, if your eyes glaze over when I mention bitcoin, force yourself to stay with me...

Remember, those folks who were tuning out the Internet in 1994 missed out on a big opportunity. Don't forget the realization I shared yesterday... Great investments are always about information.

You must know and understand something that the rest of the world doesn't know yet.

Right now, we're in the period when paying a little bit of attention can yield astronomical rewards. But this period never lasts long... So you can't just sit on the sidelines and wait.

Drawing on my experience, I knew almost immediately that bitcoin had "deep, blue ocean" potential...

You see, bitcoin doesn't give us merely a better digital currency. It's much more than that... It also gives us a path toward revolutionizing the way the Internet itself works.

The cryptocurrency movement unleashed blockchain technology. It's an uncensorable database that is unlocking ways for us to protect our privacy online... to speak our minds without being restricted... and to "digitize" and make tradeable literally anything of value in the world. (It even includes virtual goods that don't actually exist in the real world.)

Just like the Internet in 1994, it's hard to put the crypto revolution into words. It touches on so many different things... all parts of your daily life that you likely don't even realize.

That's why I hardly slept when I first learned about bitcoin.

I set up mining machines... computers that run software to support the bitcoin network in exchange for a payout in bitcoin. I set up so many that I had to hire an electrician to rewire my house. I went from knowing nothing about bitcoin to big returns on willpower alone.

I read about the bitcoin technology 18 hours a day, trying to gain an edge. I met up with strangers in parking lots to buy computer hardware I needed. I traveled to obscure conferences and posted on message boards that maybe 20 people around the world visited.

And I couldn't shake the feeling that my winning formula – a barrier to entry, plus a technology that connects people, plus a rare and instantly recognizable value – was playing out again.

It required a ton of time just to use cryptocurrencies in the early days. But they've introduced us to a transformative technology. And bitcoin, as a recognized form of value, has finally broken through the cultural zeitgeist... It's now talked about in movies, in books, and on CNBC.

That's why my conviction has grown stronger with each passing day.

Best of all, we're still in the early innings of the opportunity in the crypto space...

When I tell people I'm a crypto analyst, they almost always tell me a story about some friend of a friend of a friend who bought bitcoin a long time ago and paid off his house. They usually share the story with a somber, mournful tone... as if they missed the boat.

I have to keep myself from laughing and shaking my head.

Since joining Stansberry Research less than two years ago, I've guided my Crypto Capital subscribers to 600%, 1,200%, and 1,300% returns. Since the start of the year alone, I've closed out 17 picks for an average return of 249%.

And still, I can say with the utmost confidence... The best is yet to come.

This is like the Internet in 1994. This is when the information isn't widely known. You aren't buying when there's blood in the streets... You're buying before folks even see the streets.

Lightning hardly ever strikes twice. But I've caught it twice. And this time, I'm not buying a couple domains and calling it a day. This time, I'm going deeper... I'm aiming for changing people's lives. I'm urging you to stop fixating on the weeds and start looking at the forest.

Bitcoin could be the base that helps us build a new global currency for the next 100 years. The worst possible place for you to be is sitting on the sidelines.

Editor's note: Bitcoin is above $11,000 today – up more than 125% from its mid-March bottom. But Eric believes that's just the beginning... He predicts that bitcoin could reach $1 million in our lifetimes. And recently, he sat down with our founder Porter Stansberry for an online talk about how you can earn huge profits as the crypto revolution unfolds. Watch it here before it goes online.

By understanding a new asset's crucial components, you'll be able to get in before they take off. And when an investment has these three important aspects, it has what Eric calls "deep-blue-ocean potential"... Get the full story here: Say Goodbye to the 'Little Pond' With This Information Edge.

If you're like most folks, you still have some questions about what cryptocurrencies actually do and how they work. That's why Eric laid out an easy way to understand this new technology in simple terms right here: Become a Blockchain Expert in Less Than Four Minutes.

As regular readers know, we use different companies as real-world economic bellwethers. When bulk-freight companies are in high demand, we know there’s a broad demand for raw materials… a sign that industry is still strong. And when retail stores are bustling, we know consumers have money and feel comfortable spending it. That’s what we’re seeing from this electronics retailer…

Best Buy (BBY) is a $25 billion chain with more than 1,000 big-box electronics stores in the U.S., Canada, and Mexico, along with a healthy e-commerce business. Its most popular products include computers, smartphones, and video games. When the economy is struggling, folks can’t afford to get new gadgets. But that’s not the situation today… Instead, Best Buy’s sales are up about 2% in the current quarter – even though for part of that time, Best Buy didn’t even allow customers inside many of its stores.

BBY shares are up more than 50% over the past year, and they just hit a new all-time high. When folks are buying fancy phones and pricey video games, it’s a positive sign for the economy… 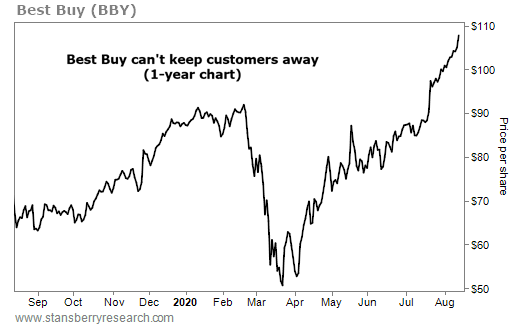