Your Alma Mater Is 'China-Phobia's' Next Victim
By Vic Lederman
Friday, September 4, 2020

Uncle Sam is at it again.

He just asked universities to change how they invest. Specifically, he asked them to stop investing in China.

Make no mistake, the goal is to hurt China... not to help U.S. universities.

This is a political maneuver. It's designed to put out the "tough on China" image. And universities just happen to be the bystanders getting hurt this time.

It's strange. But that's where we are.

Regular DailyWealth readers have seen this before. In October, I covered how politicians were lining up to force government 401(k)s into divesting from Chinese companies.

It was a boneheaded move then. And today's action is similarly boneheaded.

The simple fact is, "China-phobia" is still here. It's going strong. And this time, it's hurting your alma mater.

Don't let the government rhetoric fool you. If you get swept up in China-phobia, it will hurt you, too.

Let's go over the details. I think you'll see that letting China-phobia drive your investment decisions would be like taking a chainsaw to your returns.

On August 18, the State Department released an ominous letter. It's titled "Letter From Under Secretary Keith Krach to the Governing Boards of American Universities."

You can go read the original for yourself online. But the premise is simple... China is bad, so don't buy shares of Chinese companies.

Putting the politics aside – let's focus on the money. To make its point, the State Department makes two outrageous threats...

First, it threatens universities by implying that buying shares of Chinese companies, even through index funds, is a breach of fiduciary duty. In other words, the government is telling universities that buying emerging market stocks is irresponsible... and hinting that it might take action against them for doing so.

Second, the government threatens that the delisting of Chinese companies is imminent. This is such a big statement, it's hard to address the scope of it. But the bottom line is simple.

Threats like these are designed to make headlines. That's all. And acting on them would be a near impossibility.

It's the sixth-largest company on U.S. stock exchanges by market cap. And its operations span across the world. Its stock is also up more than 300% since it went public in 2014... triple the return of the U.S. market.

This is the kind of company that Uncle Sam is threatening to take away from U.S. investors. And it's starting by bullying universities... hoping they'll be scared enough to pull their money out.

Giving in to the pressure would be a big mistake. Over the last two years, Chinese A-shares have more than doubled the performance of the S&P 500.

The reality of this situation is simple. China and the U.S. are the world's two largest economies. And Uncle Sam is threatening to cut U.S. investors off from one of them.

It's a short-sighted and selfish move... one that's designed to hurt U.S. investors for a short-term political win.

Last fall, Uncle Sam targeted the 401(k) plans of its own employees. This year, it's targeting university endowments. And it's using the threat of delisting some of the world's largest companies from U.S. exchanges as its lever.

That kind of fear-based narrative might motivate some Americans to get out of emerging market stocks all together. But the data shows us they'd be making a big mistake.

China-phobia isn't an investment thesis... It's a political one. And it's designed to hurt and intimidate U.S. investors to score political points.

P.S. Investing in China has been one of the smartest moves you could have made over the last few years. And today, my colleague Brian Tycangco sees a similar setup taking place in another part of the world. It's a group of markets he calls the "Next Chinas." And he recently put together a presentation detailing exactly how to profit. You can check it out right here.

"We're seeing a lot of anger directed at China lately," Brian Tycangco writes. But the effect it's having on the way people invest isn't necessarily for the better. In fact, this shift is likely worse for the U.S. than it is for China... Get the full story here: Who Loses When the U.S. Drops China Investments.

"Things are getting out of whack for one of China's major stock funds," Chris Igou says. When people are this distrustful of Chinese stocks, they go on sale for a shocking discount. And that means huge upside potential... Read more here: Buying a Dollar for 84 Cents.

Market Notes
E-COMMERCE IS COUNTING ON THIS COMPANY

The coronavirus pandemic has added fuel to the e-commerce trend. When customers were nervous about venturing into brick-and-mortar stores, or when those shops were closed entirely, they ordered online. We’ve been tracking several recent e-commerce winners. And here’s another company that’s profiting from their success…

FedEx (FDX) is one of America’s largest shipping companies. When you buy something online, there’s a good chance FedEx will help bring it to your house. So while FedEx is handling fewer commercial shipments amid COVID-19, a surge in residential deliveries partially offset that decline – leading the company to top Wall Street’s estimates. The company pulled off a $2.5 billion adjusted profit in the most recent quarter.

FDX shares are up roughly 140% from their March lows, and they just hit a new 52-week high. With e-commerce booming today, FedEx should continue to thrive… 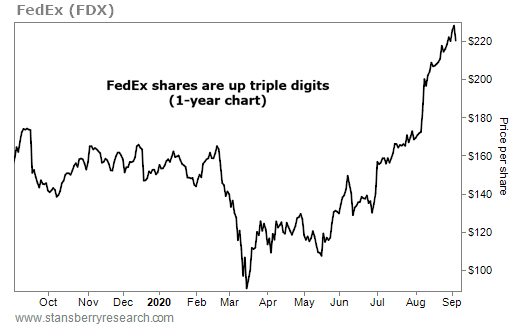