If you read the financial news, you've seen it by now...

Zillow (Z) paused its homebuying program three weeks ago. And it announced that it wouldn't be purchasing any more homes until next year ‒ at the earliest.

The media response was... predictable.

And Yahoo Finance cautioned with the headline: "Is Zillow's plunging stock price a warning about the housing market?"

Then Zillow announced that it is dumping its inventory. The company is exiting the iBuying market altogether. And the media frenzy intensified in response.

Here we are again... talking about the end of the housing market.

The topic is a pundit favorite. Heck, the media has called for a housing bust nearly every year since 2008.

First, it was the prospect of the "double dip" recession... And as soon as home prices started hitting new highs, the "bubble" talk started back up.

In today's essay, we'll see what is really going on...

We'll begin by asking two questions: What will cause America's housing boom to end? And when should we expect the end to come?

It's the perfect time to address this head-on. After all, in DailyWealth, I recently described how "iBuyers" – Zillow specifically – are using algorithms to make sight-unseen offers on houses... and acting as a backstop for the housing market.

Now Zillow is out. Does that mean the end of America's building boom is around the corner?

Let's look at how Zillow fumbled its iBuying program, then examine the housing market as a whole to figure out how we'll know when the building boom is at its end.

The "everything shortage" pinched Zillow...

I want to be crystal clear here... the company made a darn big misstep.

Zillow went on a buying spree and built up an inventory of roughly 3,800 single-family homes.

The median sale price of a home in the U.S. just reached an astonishing $404,700. A back-of-the-napkin estimate determines that Zillow had a little more than $1.5 billion worth of homes on its books...

Today it’s trying to sell them as quickly as possible... while taking the smallest loss possible.

Now, Zillow didn't buy these houses as investments simply to sit on them and collect rent like a real estate investment trust ("REIT") might do. Instead, it intended to flip them as quickly as possible, for as much as possible.

That made Zillow extremely sensitive to price changes in the housing market. And it needed to turn its inventory quickly... Otherwise, the market could drop below the predicted prices that Zillow uses to calculate the profitability of its deals.

But ‒ and this is the important part ‒ Zillow assumed it would have access to contractors to do the restoration work needed to flip its newly bought homes.

If you're even remotely aware of the state of the world, you know that was a mistake. Nearly every industry is fighting for workers these days... And that's especially true in labor industries like construction.

Worse still, reports about Zillow overpaying for homes are bubbling up to the surface. It turns out Zillow’s big tech math wasn’t so great at pricing homes in today’s volatile market.

So Zillow is not hitting the brakes on its homebuying program because it fears a collapsing market. Rather, the company bought up a bunch of homes, but it didn't have the labor it needed to flip them in a timely manner... And now, after a darn big pricing fumble, it's dumping that inventory back into the market.

So, what does this say about the state of the housing market?

It tells us that the U.S. is still in the throes of a labor crunch... and that Zillow made a huge error in judgment.

Not surprisingly, Zillow's stock is down 50% so far this year. But unless you've loaded up on Zillow shares, that doesn't mean a whole lot for you... or the housing market.

In fact, for most folks, a little cooling in the housing market might be a good thing...

I might be Mr. Real Estate, but I'm also willing to say that a temporary slowdown wouldn't be so bad. We simply can't sustain 20% year-over-year pricing increases in the housing market.

High prices will push people out of the homebuying frenzy, at least briefly. And we're already starting to see a downtick in consumer-sentiment data.

Regular readers know that a recent University of Michigan survey shows us that consumer sentiment plunged last month. Folks are now more pessimistic on housing than they've been since the 1980s – when borrowing costs were five times as high.

But pessimism and frustration aren't the same as action. People are still buying... They're just not happy about the prices.

New single-family-home sales currently hover at an annualized rate of around 740,000, according to the U.S. Census Bureau and the U.S. Department of Housing and Urban Development. That's still relatively near what it was from 2016 through 2019.

Despite some wild COVID-19 pandemic fluctuations, consumer behavior in the housing market has mostly stayed on track. And this shouldn't come as a surprise.

With everyone grumbling about soaring prices, you might think that we're facing an affordability crisis in housing...

The chart below measures affordability by looking at the cost of the average home, the average payment on it, and what percentage of the average American's income it would take to make the payments on that home. 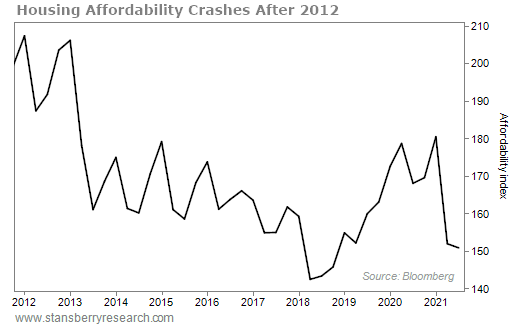 Let's take a look at the data another way...

The following chart looks at affordability data since the 1990s. Since that time, the average affordability index has been around 140, indicated by the horizontal line. And it's pretty darn obvious what threw us off that line...

The housing bust in 2009 sharply increased the affordability index by decreasing the average price of homes. Only now are we settling back toward our long-term affordability average of roughly 140. Take a look... 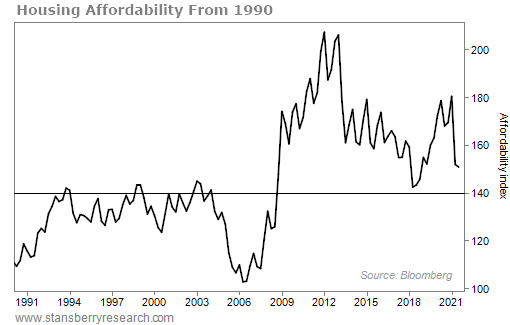 The takeaway is clear.

People hate that housing prices are up, but that hasn't dramatically slowed purchasing. And more important, the average American is still able to afford a mortgage based on this measure.

So, when does this building boom end?

It all comes down to supply and demand.

After the housing bust 12 years ago, builders walked away from the market... Housing starts fell to the lowest level on record. It took the U.S. many years to get back to normal levels of housing development.

The chart below measures housing units ‒ including both single-family and multifamily developments... 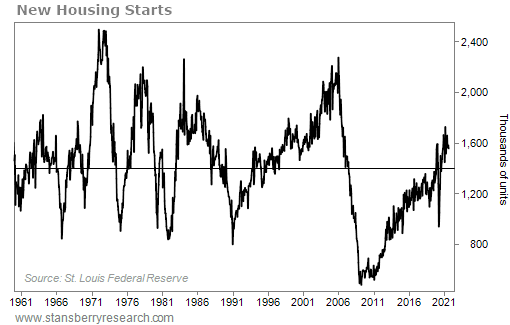 You can see that supply has clawed its way back from 2009. But we still need a lot more of both types of property to close the gap from a decade of underbuilding...

Current estimates put the housing supply at roughly 5.5 million units below the demand. Two million of that comes from the single-family-home shortage. And the remaining 3.5 million missing units are in the multifamily category.

You can't get around supply and demand. It's Economics 101... As a result of these numbers, Goldman Sachs is predicting another year of double-digit growth in 2022.

So when does the housing boom end? Only when supply starts to catch up with demand.

And until then, everything else is just a speed bump.

High prices might be one of those speed bumps, slowing the pace of buying. But high prices don't mean that families stop needing homes to live in. They'll just wait for an entry point that they can afford.

It's the same thing with rising interest rates. If rates rise, home payments rise with them. And that means houses get harder to afford.

But in good times and bad, people need homes. And it doesn't seem like supply will catch up with demand anytime soon.

This continuing boom extends into many aspects of the building industry... not just homebuilders themselves, but suppliers, home-electronics makers, movers, and more.

That's why this is no time to sit on the sidelines of a red-hot bull run. Take advantage of America's building boom today.

Editor's note: In True Wealth Real Estate, Steve and I focus on finding the companies best positioned to benefit from America's building boom. Despite supply-and-demand imbalances flipping nearly every industry on its head, the housing market is still red hot... And we're ready to profit from it. If you're looking for ways to play this bull run through the stock market, click here to learn more.