Gold was all the rage when I started in this business in 2010...

The metal was nearly a decade into a major boom. Prices had exploded after the worst of the financial crisis. And just about everyone thought of it as a way to make a quick buck.

You'd see "We Buy Gold" signs everywhere you looked. Gold advertisements were all over financial television. And the gold-mining industry felt like a roulette wheel that always stopped on a winner.

The story is different today. Gold blew its big shot at an inflation rally, as I explained last month. And everyone has given up on the metal.

They're making a mistake, though... Gold is now in a turnaround. The metal soared 8.3% in November. That's a rare move in a short window of time... And history shows we could see another 19.5% rally over the next year as a result.

But the decline ended in November. The metal's 8.3% jump took prices to a multimonth high. The gains continued in December. And this is likely the start of a major move higher.

You can see the rally in the chart below... 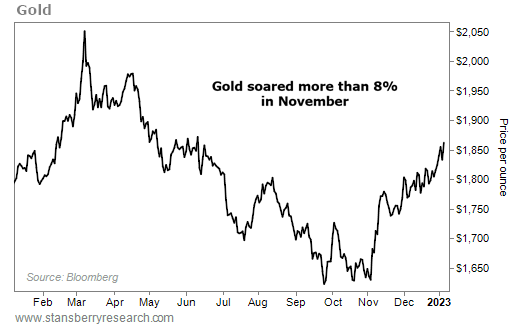 The jump in November was rare. Similar surges have only happened 7% of the time over the past 50 years.

More important, these moves tend to kick off larger surges. To see them, I looked at every 8%-plus monthly jump in gold. And the results were impressive...

Gold is typically a boring, nonproductive asset. But it's also an amazing store of value. As you can see, the metal has gone up 7.7% per year over the past five decades.

Those are solid, stock-like returns. But you can do much better if you buy the metal at the right time... for instance, after a big one-month rally.

Most folks would have a hard time believing this. They'd struggle to buy gold after such a large one-month rally... They'd expect the run-up was already over. But according to history, gains like these often signal the start of an uptrend.

The truth is that trends work darn well. Once prices get moving, they tend to keep moving. And you want to ride those waves as an investor.

That's why you shouldn't give up on the metal for failing its "inflation test" in 2022. Instead, you should watch the trend... and be willing to buy when the time is right.

History shows the time is right today. And it means 2023 could finally be gold's year.

"If you're focused on growing your money over the long run, then the next couple years should be a great time to do it," C. Scott Garliss says. 2022 was a terrible year for assets. But historically, times like these have paved the way for impressive returns... Get the full story here.

Inflation caused chaos in the U.S. markets last year. It also took the U.S. dollar for a ride. First, the dollar soared as the Federal Reserve raised rates... Now, it's falling again. And importantly, that's setting up a major tailwind outside of U.S. stocks... Read more here.