The 1970s went down in history as one of the most important decades for our financial system.

That was the decade our country's monetary system changed forever.

Until the 1970s, gold was what backed the value of our currency. If you wanted to convert your dollars to physical metal, you could do it.

President Richard Nixon broke that structure in 1971. He removed gold's convertibility. And overnight, our gold-backed currency became backed only by full faith in the U.S. government.

That change allowed the price of gold to fluctuate on its own for the first time. And it's why the 1970s gold boom was possible in the first place.

There was another key driver though. Today, we'll look at what it was... and why it could push gold to $3,000 an ounce... or even higher.

On Friday, I explained how a spike in inflation could be coming... and that it could lead to a massive boom in gold prices. We're digging into that idea a bit deeper today.

Now, I don't expect to see the metal soar quadruple digits from here. And I don't expect we'll see double-digit inflation either. But we don't need the extreme inflation of the late 1970s for gold to rocket higher.

We just need inflation to start rising by a modest amount. Let's look at a few historical cases to see what I mean...

The U.S. went into a recession after the dot-com bust in 2000. The easy gains of the late 1990s were over for technology stocks.

Inflation dropped, hitting 1.1% in February 2002. Gold prices fell slightly from February 2000 over the next two years as well. Then the Federal Reserve stepped in...

To try and fire the economy back up, the central bank cut interest rates 11 times in 2001 alone.

Low interest rates make it cheaper for businesses to borrow money. This encourages folks to spend more and take out debt to buy houses, cars, and other goods. And in the long run, these low rates can send asset prices soaring, eventually causing inflation. 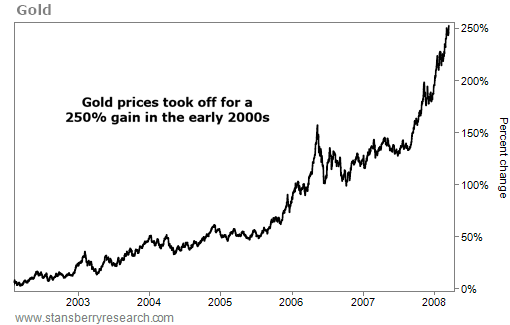 As inflation moved higher from 2002 to 2008, so did gold. It was one of the largest gold bull markets since the 1970s. And that wasn't the only time this happened.

Most folks wouldn't have expected yet another great gold boom to be around the corner after 2008. But looking back, once again, the Fed's actions were a dead giveaway...

The global financial crisis followed gold's 2008 peak. And the Fed once again cut interest rates to near zero.

This time, inflation fell below zero in one of the worst recessions of our lifetimes. It hit -2.1% by July 31, 2009... And then it rebounded just as sharply as it fell. 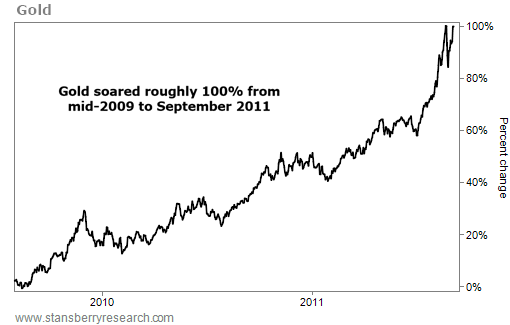 Gold even outperformed the S&P 500 Index over that period. Stocks were up just 24% in that two-year span.

Clearly, the 1970s are the banner example of rising inflation triggering a gold boom. But that's far from the only time we've seen the trend play out.

Importantly, the same kinds of things that set off inflation in these past scenarios are happening today...

The Fed has once again lowered interest rates to zero in order to boost the economy. Even more, Fed Chairman Jerome Powell announced that he wants to keep interest rates low for at least three years.

The Fed's goal is to send inflation above 2%. That 2% level is one that it hasn't been able to achieve in recent years. But Powell is determined to make it happen now – and beyond.

That will be enough to send gold on a multiyear bull run. And it means the metal could double – or more – from here.

That means $3,000 could be just the beginning for gold. It won't happen overnight. But the setup is in place. And that means you need to own the metal now.

"This was nothing like the U.S. had seen before," Steve says. If you missed Friday's essay about the effects of inflation in the 1970s, make sure to read it to learn about what it meant for gold back then – and what our current situation means for gold now: What the 1970s Tell Us About Today's Gold Boom.

"I see no end in sight for these price gains," John Doody writes. The bull market in gold is like any other bull market: it only ends when there's no one left to buy. And with all the uncertainty in the world, the price of gold is only looking up from here... Get the full story: Why This Bull Market Isn't Stopping Anytime Soon.