Most investors expect stocks to slump as rates rise.

This assumption makes sense... As I covered yesterday, higher rates mean stocks will face more competition from other assets, like bonds. That means less demand, and lower prices.

But what if I told you this story doesn't play out exactly like you'd expect?

Stocks will crash as a result of rising rates... eventually. But the "eventually" is the important part.

Today, I'll show you how things have gone in the past, and what it means for the rate-hiking cycles we're about to see play out.

Folks think that the first hint of higher rates is a bad thing. That's because ultimately, rate hikes do come before major stock market crashes...

The key is, that initial kickoff doesn't spell immediate disaster. We've seen this play out over and over again in the past.

Let's start by looking at the late 1990s. The Federal Reserve began hiking rates in June 1999. It went on to hike rates five more times before the S&P 500 Index finally peaked in September 2000. 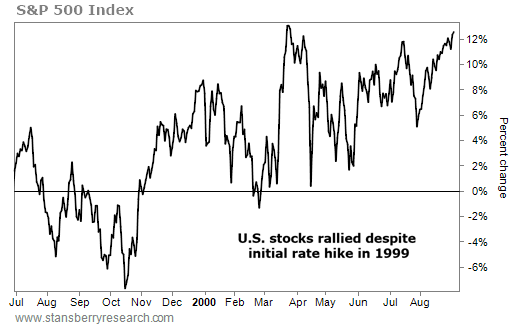 The first Fed hike wasn't a dagger to the heart. While the S&P 500 fell shortly after, it went on to even higher highs over the next 15 months.

This isn't unique to the late 1990s. A similar scenario took place before the 2008 financial crisis...

The central bank raised rates in June 2004. But if you remember the boom that came next, you know that was nowhere near the eventual peak. U.S. stocks rallied for years after that rate hike. Take a look... 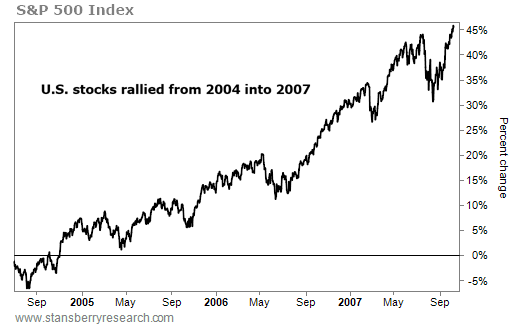 You can see it's not the initial rate hike you have to worry about. It takes a while for the market to digest what's happening and re-price the stock market.

Right now, that means that if the Federal Reserve bumps up rates in early 2022, it won't be the final nail in the bull market's coffin. In fact, you don't need to worry about the initial rate hikes at all.

Stocks can – and likely will – keep soaring after the Fed's first rate hike. History proves it.

This bull market won't last forever... They never do. But we still have time to make money before things turn over. That means you want to stay long stocks now.

"Today's seemingly crazy inflation won't last," Steve writes. Inflation is the boogeyman in today's market. But this indicator tells us that it's a temporary problem that won't cause the Melt Down... Read more here: The Market Is Telling Us Inflation Won't Last.

The Fed has printed trillions of dollars and dumped them into the economy over the past year. With each dollar worth less than it was before, folks are expecting the dollar's value to continue to fall in the future. And that gives us a major opportunity... Learn more here: The Most Contrarian Bet You Can Make Today.

Today’s company keeps its customers coming back for more…

Regular readers know that brick-and-mortar retailers have had to adapt during the recent e-commerce surge. Many stores have changed their business models to keep their doors open… while others have the luxury of loyal customers to keep business booming. Today’s company is an example of the latter…

BJ’s Wholesale Club (BJ) is a $10 billion big-box chain. It sells groceries, home goods, and many other items. BJ’s business model is similar to that of Costco Wholesale… It often sells products in bulk, which keeps prices down for its paying members. And with yearly memberships starting at $55, BJ’s shoppers are motivated to come back often. In the most recent quarter, sales increased to more than $4.1 billion, up 5.6% year over year… And first-year membership renewals remained at historic levels.

As you can see, BJ shares are up almost 135% over the past two years. They’re now at an all-time high. And as folks keep looking for bargains, it should only boost shares of this “member perks” store… 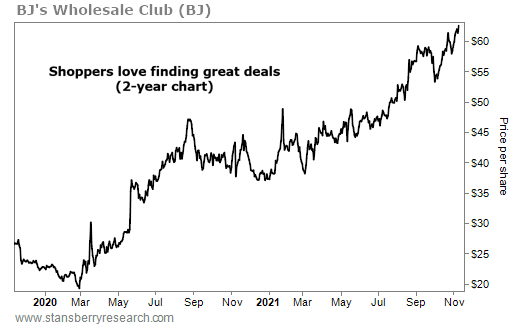