The Most Contrarian Bet You Can Make Today
By Steve Sjuggerud
Tuesday, July 20, 2021

The economic response to COVID-19 can be summed up with a single word... stimulus.

The Federal Reserve has pumped $6 trillion into the U.S. economy since the pandemic began.

It was a push to help the U.S. economy get through the COVID-19 pandemic. Ultimately, it gave a lifeline to struggling businesses while also boosting the economy.

The stimulus plan was more than four times the amount the Fed put out in response to the 2008 financial crisis... making it the largest monetary stimulus in U.S. history.

All that money flowing into the system had another effect, though.

Today, I'll share it with you... and explain how it could affect your investments in the months ahead.

When trillions of new dollars are introduced to the economy, it causes each individual dollar to be worth less than it was before.

That's what you'd expect to see. And it's exactly what has happened to the U.S. dollar since COVID-19 hit the scene and the Fed began pumping money into the system.

Just look at the chart below. You can see that the U.S. dollar has plummeted over the past year... 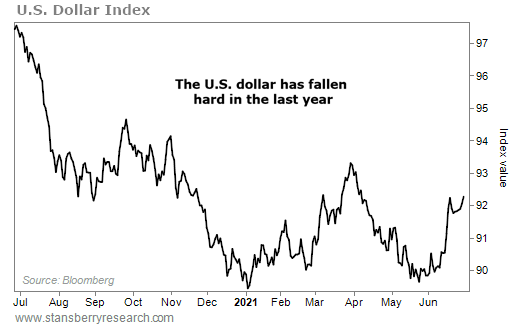 Currencies tend to move slowly... So that's a major decline. But while plenty of money is still floating around in the economy, a major shift has happened that could lead to something no one expects: a rally in the dollar.

Normally, more dollars in the system means less value. That's what we've experienced over the last year. But importantly, it has already happened.

Instead of realizing that, folks are now expecting that loss of value to continue indefinitely. And that consensus creates our opportunity.

You see, when everyone is making the same directional bet in the markets, that trend is likely to reverse. This is the piece of information that gives us the edge. And it's happening now in the U.S. dollar.

We can see this through the Commitment of Traders ("COT") report. Regular readers know this is a weekly update on what futures traders are doing with their money. 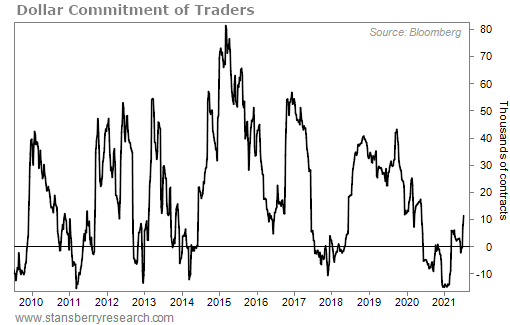 This chart is simple... The lower the number is, the more bets were placed against the U.S. dollar. You can see that this indicator hit a decade-plus low earlier this year. And pessimism is still extreme today.

Importantly, if we look at similar times when futures traders were this bearish, we can see that the U.S. dollar started to rally...

For example, the COT report showed that bets on a falling dollar hit a multiyear high in March 2011. With record bets against the dollar, there was almost no one left to buy.

The speculators got this trade completely wrong. They were most bearish on the dollar at exactly the wrong time. And betting against them was the right call.

It happened again in early 2014. Futures bets were back at multiyear levels of bearishness. And the U.S. dollar went on an absolute tear...

Today, we could be on the cusp of another rally. I realize that this might sound outrageous. The general consensus would be to bet against the dollar when we have an oversupply of dollars flooding the markets. But given that everyone is thinking this way, a rally is likely.

That means that you want to position your portfolio for a dollar rally today. There are plenty of ways to do it... But whatever you choose, just make sure you're prepared. A dollar rally is coming.

When too many investors pile up on one side of a trade, the opposite is likely to happen. Folks are hurrying into "safe haven" assets today. But following the crowd could mean missing out on further upside from here... Get the full story here: Don't Rush Into This Popular Bet Today.

"Most investors see new highs and get caught up in strong emotions," Brett Eversole writes. But strong emotions can often be a contrarian indicator. And that's exactly what's happening in stocks today... Read more here: Don't Bet Against Stocks at New Highs.

Today, we’re checking in on a company that’s “selling the basics”…

Regular readers know we’re always on the lookout for companies that sell everyday items. It may not sound exciting, but selling consumables like frozen foods and cleaning products is a winning long-term strategy… People use up these everyday staples, then go out and restock their cupboards. Today’s company sells the snack foods that people love…

Mondelez International (MDLZ) is a $90 billion snack giant. It boasts well-known brands like Oreo (cookies), Ritz (crackers), and Stride (gum). These popular products keep people coming back for more, no matter what… which is great for business. In its most recent quarter, Mondelez reported net sales of more than $7.2 billion – an increase of 7.9% year over year. And the company also returned $1.5 billion to shareholders through dividends and share repurchases.

As you can see, MDLZ shares are up more than 50% since last year’s March lows… And they recently hit a fresh all-time high. As folks keep buying their favorite snack foods, that uptrend should continue… 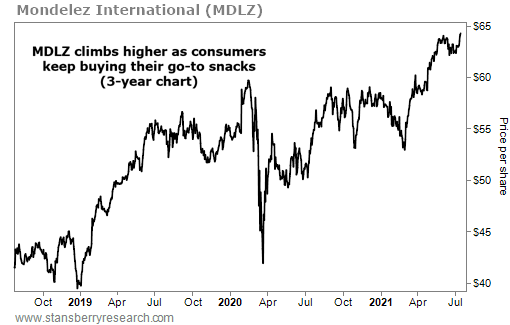