A New Housing Bubble Is Underway
By Vic Lederman
Thursday, May 5, 2022

I met with one of Northeast Florida's premier real estate agents last month...

He has sold more beachfront homes than just about anyone in the area. He knows "island living" in his bones. And after decades of selling as an independent realtor, he has seen his share of market cycles.

If that surprises you, think about this...

In Nassau County, just outside of Jacksonville, there are 1,148 real estate agents... and only 193 single-family homes on the market.

Folks, that's not a healthy ratio. And it's just one sign that the current housing boom is quickly moving into bubble territory.

Nassau County has its advantages. It has sunny weather, beach access, surfing, and low tax rates. It's a shining example of the "lowest cost of living to highest quality of life" setup that Steve sold me on when I moved to Florida.

But today, there are six realtors for every available property... And no perks of island living can justify that.

It's not just Nassau, either.

In Florida as a whole, realtors outnumber properties by more than 10-to-1. That figure is about 5-to-1 nationally... up from 1-to-1 pre-pandemic. And by the way, the National Association of Realtors added a record number of members last year.

People are rushing into real estate. It's not hard to see why...

You get to be your own boss and pick your own hours. You do a vital service for folks seeking homes. If you get bored of your surroundings easily, the scenery changes every day.

Most of all, housing is a great place to make a buck. There simply isn't enough supply to meet demand. Prices are up. And bidding wars are getting outlandish...

Nearly 6,000 homes have sold for at least $100,000 above asking price in 2022 so far. That's more than double the number of six-digit overbids in all of 2021. In the hottest markets, like San Francisco and San Jose, overbids of this size made up almost half of sales.

If you were the realtor on one of those deals, you'd collect a fat commission... roughly an extra $3,000, depending on the terms of the sale.

But there's the problem. It's the reason why a new realtor should be worried about getting into the market today... All these people chasing "easy money" is the hallmark of a bubble.

We are witnessing the beginning of a new housing bubble in the U.S.

I can't stress this enough, though: It's not time to be alarmed. Not yet, anyway. The last time we saw a similar setup, it lasted for years before things got ugly...

The first mention of the phrase "housing bubble" was in 2002. Dean Baker noted it in a paper for the Center for Economic and Policy Research. But economist Robert Shiller warned of the possibility of a housing collapse as early as September 2001... six years before the peak.

These analysts weren't wrong. But they were ridiculously early. And they prove an old economics adage... If you say the same thing every year, eventually you'll be right.

Let's say you fled for safety as soon as Shiller cried "bubble." Take a look at what happened next in the housing market... 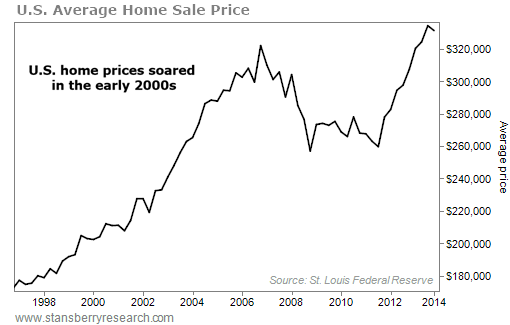 If you had washed your hands of the market in September 2001, you would have missed out on a half-decadelong bull market in housing.

Of course, the crash that followed was brutal. And I'm not saying the folks who predicted it were wrong. But bubbles can last much longer than anyone expects.

That's good news for investors today... because an inflating bubble is one of the best ways to make massive gains in real estate.

So yes, the boom is turning into a bubble in U.S. housing. But that doesn't mean you should worry. And it doesn't mean it'll end soon.

The craziness is likely just getting started. And it could last years before things get ugly.

"We could see another long-term boom for housing prices," Steve writes. Right now, there aren't enough homes available to meet the market's huge demand. And that means the current boom in housing prices still has plenty of room to run higher... Read more here: The Reason Housing Will Keep Booming.

With housing prices still on the rise, many investors are piling into real estate... which is normally our signal to stay away. But if we keep our money on the sidelines, we could miss out on solid returns as the sector marches higher... Learn more here: Why You Shouldn't Fear Soaring Home Prices.

Market Notes
CONSUMERS ARE DIVVYING UP THE 'NEEDS' AND 'WANTS'

DailyWealth readers know we often use certain companies to help gauge the health of the economy. Lately, we’ve highlighted some “bearish bellwethers” that show consumers are cutting back on spending. With inflation weighing on their wallets, folks are more worried about affording gas and groceries – and less eager to splurge on things like takeout…

Wendy’s (WEN) is one of the largest fast-food chains in the U.S. Customers have enjoyed its burgers, fries, and Frosty shakes for decades… But like the rest of the restaurant industry, Wendy’s is feeling pressure from higher labor and food costs. About a month ago, the company announced that it expects to raise menu prices roughly 5% this year to counter inflation. And while fast food is still a cheaper option for consumers, the market is nervous that folks may simply choose to eat at home.

As you can see, WEN shares have broken into a downtrend. They’ve fallen nearly 20% over the past six months, recently hitting a new 52-week low. This burger giant may be a drive-thru favorite, but today’s uncertainty is weighing on shares for now… 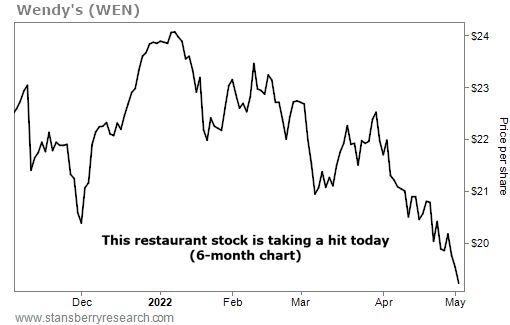