A 'Professor's Method' to Finding Top Performers for the Long Term
By Dan Ferris
Wednesday, November 2, 2022

Editor's note: Like us, our colleague Dan Ferris believes today's bear market is creating once-in-a-lifetime value for long-term investors. In this essay, updated from the December 2021 issue of Extreme Value, Dan reveals the top characteristics of long-term buying opportunities... why these traits are so critical... and why it's especially crucial to find them in markets like we're seeing today...

Making money in stocks is simple, but it's not easy...

Third, hold on for the long term, no matter what peaks and valleys surface along the way.

It sounds easy enough on paper... But in practicality, what's the best way to find those exceptional long-term performers – the ones you can trust to endure every valley and surpass every previous peak?

To answer that, let's start with Hendrik "Hank" Bessembinder.

Bessembinder is a professor at Arizona State University. If you've heard Bessembinder's name before, it's likely due to his most famous research paper – a 2018 piece titled, "Do Stocks Outperform Treasury Bills?"

According to him, just 3% of more than 25,000 listed stocks returned $47 trillion more to investors than Treasury bills produced since 1926.

In 2019, Bessembinder conducted similar research on global stocks and found that of more than 26,000 globally listed companies, just 1.3% returned as much to investors as every single Treasury bill combined between 1990 and 2018.

Knowing how to identify the few potential great performers out of thousands is clearly a valuable skill. You need to buy them when their share prices fall and hold them for the long term, which, as we know, is more difficult than it sounds.

Bessembinder found that the average drawdown of the best-performing global companies since 1990 was 32.5% and that it lasted an average of 10 months. Shareholders of some extraordinary stocks had to endure even larger drawdowns for longer periods of time. 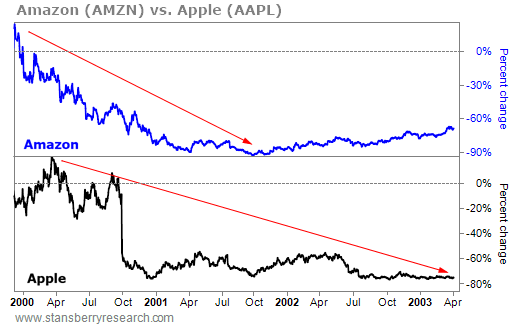 You could have bought either Apple or Amazon at any time and at any price along the way and you'd be holding a huge return today...

But buying either at its respective low could have made you several hundred times your money, even after the recent fall in these stocks... 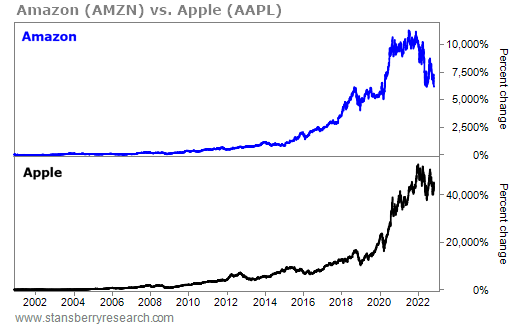 Bessembinder wanted to know how to find stocks with best-performer potential. So, he searched for and determined a few key characteristics that can help investors find those stocks.

Investment firm Baillie Gifford summed them up like this...

Investing in research and development while still achieving superior growth in returns, scale and profitability is a key characteristic of winning companies. Firms succeed or fail for myriad reasons, but this appears to be must-have.

When you get a crown jewel at a discount that ticks all these boxes, you hang on for the long term.

Editor's note: Many investors will be tricked by last week's rally. But as we've shared before, moves like these are common in bear markets. And you need to be ready... because Dan believes stocks could keep crashing from here, potentially leading to years of substandard returns.

If even part of his forecast comes true, Dan says a simple solution could point you to the investments you need to own next... while ensuring that future declines don't destroy your wealth. Click here to learn more.

"It's like a moth flying through a flame again and again," Dan says. Over time, investors tend to behave in the same ways – and fall for the same traps. Today, many investors are likely to get burned by bear market rallies... Read more here.

"Even if the U.S. enters a major 'go nowhere' market that lasts decades... we can still make money," Dan writes. In this two-part series, he explains why this scenario is likely – and reveals the four simple metrics that can help you thrive in brutal sideways markets... Learn more here and here.