A Skeptic's Case for Investing in Bitcoin
By Austin Root
Friday, November 20, 2020

On the flip side, are you among the naysayers who argue bitcoin is a sham, a hoax, and only extreme fools would risk real money "investing" in something as arbitrary as a digital currency?

My guess is that most of you find yourself somewhere in between these two extremes. And I need to make a confession... After much research, I still find myself in that middle ground.

Nevertheless, I do own bitcoin. And I recently bought more.

I believe now is the time for every investor to own some bitcoin. One simple reason why is that it fills a crucial role in your portfolio...

Bitcoin is a cryptocurrency. It's a digital asset that isn't controlled by any person or government. And it operates completely outside of the traditional banking system.

Bitcoin can be transferred to anyone with a "digital wallet" – anywhere in the world – securely, cheaply, and almost instantaneously. The technology that enables this is the blockchain. The blockchain is basically a database or ledger. But it's distributed across the entire network, so that everyone can see all the data on every transaction and verify their accuracy.

So how does bitcoin fit into an investment portfolio?

In my view, every investment portfolio – whatever your goals may be – really needs only two main kinds of assets: productive assets and stores of value.

Productive assets are your workhorse investments that will generally account for the majority of your portfolio and contribute most of your overall gains. These assets are "productive" in that they generate a rate of return greater than their cost of capital (and inflation).

Stores of value should make up the rest of your portfolio. This is your reserve (or "cache") of safe capital that you expect to essentially maintain its value over time. It's also your store of "dry powder" that you can opportunistically deploy into productive assets after a major market sell-off.

Examples of stores of value that have been widely used over time include cash, U.S. Treasury bonds, gold, and non-income-producing real estate assets.

So with that in mind, where does bitcoin fit in? Is it a productive asset or a store of value?

The most ardent bitcoin bulls will argue that it's more of a productive asset. They see bitcoin as the transactional currency and network that will transform financial markets around the globe. But mostly, they're just seduced by bitcoin's extreme growth in value from $0.05 per bitcoin in 2010 to more than $17,000 per bitcoin today.

If you invested $1,000 in bitcoin back then, it would be worth more than $340 million now. So you can see where they're coming from.

But in truth, there's nothing inherently "productive" about bitcoin. It doesn't produce earnings or cash flow. It doesn't pay dividends or interest. And you can't really value bitcoin like a traditional stock or bond.

No, unless financial markets change completely, bitcoin is decidedly not a productive asset.

So then, is it a store of value? The key to a store of value is that it needs to maintain its value over time. Bitcoin bears would point out plenty of instances where the crypto asset's price went sour faster than a gallon of milk (including losing nearly half its value in one day).

It's true that bitcoin's price has been extremely volatile in the short term. But time and again, it has proven itself as an excellent store of value over the longer run. And given current global market and economic forces, I believe bitcoin will prove to be the single best store of value on the planet over the next decade or more.

Why? Two reasons. First, the elasticity of supply of bitcoin is effectively zero. (Elasticity is a measure of how much the supply of a given good tends to increase when the price of that good also increases.) For other assets like oil or steel, as the market price goes up, so does the supply of that good... until the market reaches an equilibrium where supply equals demand. Then, prices tend to fall.

So supply will never equal demand.

That's the second reason bitcoin is the ultimate store of value in the current environment: It's the only major store of value with an ultimate supply that is finite. The maximum number of bitcoin that will ever be "mined" is limited to 21 million bitcoin – no matter what.

That might seem like a lot, but consider there are currently roughly 52 million millionaires around the globe who collectively own around half the world's net worth. If each of these millionaires wants to own just one-half of one bitcoin, there will never be enough to satisfy that demand.

That's why every investor should own at least a little bitcoin.

Editor's note: The Federal Reserve is working overtime to bring back inflation – which means it's more important than ever to invest in a reliable store of value. That's why our founder Porter Stansberry is sharing the steps you can take right now to protect and safeguard your wealth. As you'll see, the crypto markets could play a surprising role... Get the full story here.

"Right now, we're in a period when paying a little bit of attention can yield astronomical rewards," Eric Wade writes. Cryptocurrencies have already made explosive gains since they were first introduced. But by knowing something the rest of the world doesn't, you can still make major gains... Read more here: You Haven't Missed the Crypto Rally.

"New millionaires will be minted... likely even billionaires," Eric says. Another bull market in cryptocurrency is inevitable. With crypto becoming more legitimized every day, you can't afford to get left behind... Get the full story here: Bitcoin Will 'Reset' Big Banking... And a Lot More.

Today’s company is one of the “World Dominators”…

Starbucks (SBUX) is a $115 billion coffeehouse chain. It has nearly 33,000 stores worldwide, with its two biggest markets in the U.S. and China… the kind of presence you’d expect from a leading company. In the latest quarter, comparable-store sales declined 9%  year over year due to the COVID-19 pandemic. But President and CEO Kevin Johnson said that the company experienced a “faster-than-expected recovery” in its two leading markets. And Starbucks also opened 480 all-new stores during the quarter.

As you can see, SBUX shares are in an uptrend. They’re up roughly 50%, including dividends, over the past two years. And this World Dominator should continue to show strength, no matter what happens in the overall market… 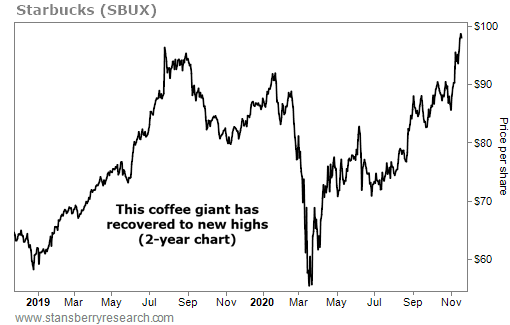