They see a stock or sector that looks "cheap" and buy immediately. The problem is that falling assets can always get cheaper in the short term.

Plus, that obvious value isn't always the no-brainer it seems to be. Lots of stocks are cheap for good reason.

Folks are piling into an incredibly cheap sector. But because it's a crowded trade already, more losses are likely from here. And as an investor, it's a great example of what you want to avoid.

The Global X MSCI China Financials Fund (CHIX) holds a basket of China's largest financial stocks. It also holds some of the largest banks in the world (based on assets), not just in China.

Now, this alone might seem like a good reason to buy Chinese financial stocks. And that's exactly the logic investors are using...

You can see the full story by looking at CHIX's shares outstanding. That's because the fund can create or liquidate shares based on investor demand. When folks want to own Chinese banks, CHIX makes more shares to meet demand. And when investors lose interest, the fund cuts shares.

Today, shares outstanding for CHIX are higher than they've been at any time since at least 2010. Check it out... 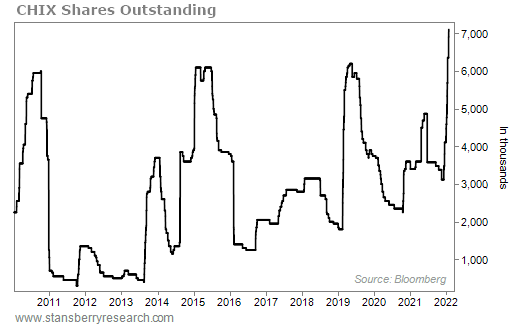 Investor interest is the highest it has been in a decade based on this measure. Folks are noticing the cheap valuations and piling in.

But joining the crowd hasn't been the right move in the past. We've seen three other setups like this since 2010. And each led to losses over the next year. Take a look... 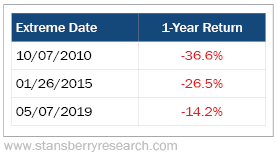 The worst drop came in 2010... Shares outstanding hit a high that October, and CHIX fell 37% over the next year. Following the crowd into this value trap was a bad idea.

The same is true for the sentiment setup we saw in 2015. Folks were "all in" on CHIX, expecting it to go higher. But the opposite occurred... The fund fell 27% in a year.

The most recent example yielded similar results. Shares outstanding peaked in May 2019. That instance led to a 14% loss for investors over the next year.

Given that track record, this isn't the time to dabble in this dirt-cheap group of stocks. Yes, CHIX offers some of the best value on the planet right now. But the crowd is already all-in on this trade. And history shows that more losses are likely as a result.

Once investor interest fades and the uptrend returns, these cheap values in Chinese banks could lead to big gains. But we aren't there yet.

A lot of investors try to time the bottom by buying a stock as it falls. But that sort of thinking is a sure way to lose money. And it's exactly what happened in one market recently... Read more here: Sentiment Is Dangerously High in One Falling Market.

When investors all bet in the same direction, it's likely that the opposite will occur. Recently, folks fled from one global market. And history shows that it was the wrong bet... Learn more here: Investors Are Losing Confidence in One Country's Raging Bull Market.