I vividly remember the waiting room at my parents' health clinic in Chinatown. It was small, dimly lit, and always smelled of bleach.

There were two long sofas upholstered in a tacky blue leather fabric. At the end of each sofa was a small table with old editions of Time and Newsweek magazines, along with that day's edition of the Manila Bulletin.

As a kid, I'd spend almost every Saturday there. I would call in patients who'd been waiting in that room, sometimes for hours.

My mom was a pediatrician, and my dad was a general surgeon. So the waiting area was usually packed with children, adults, and elderly alike.

I didn't mind the clinic. I could read all the comic books I wanted, help myself to the soda in the fridge, and even play pretend doctor with some of my dad's medical tools (the reflex hammer was my favorite).

There was one rule I always had to follow, though... and that was to never actually go in the waiting room...

I didn't ask why back then. The reason behind the rule only dawned on me once I became a parent myself.

I realized that every time I visited the doctor, I was potentially exposing myself – along with my wife and kids – to a host of infectious diseases... the ones that others in the waiting room were likely carrying.

This is the unpleasant reality of health care in many parts of the world – and particularly in China. And as a result, China is full of folks who are almost paranoid about their health.

No, this doesn't mean they're calorie-counting health buffs. They're paranoid because, just like the country I grew up in, good health care doesn't come free in China.

Their national health insurance coverage is woefully inadequate. So people who require a major operation or receive a cancer diagnosis... well, they're going to foot an enormous bill.

It's part of the reason people in China save so much of their money. And it's why, as Chinese citizens become wealthier, an increasing number of them will buy private health insurance.

It's also why at the slightest sign of a cough, fever, or cold, Chinese families make a beeline for the clinic. There's no way they'll risk getting sicker. That only makes it more difficult and expensive to get treated.

Roughly 9 million Chinese patients visit the hospital each day. That means the number of Chinese going to see the doctor each month is almost equivalent to the entire U.S. population. Another 253 million were admitted into hospitals last year.

Despite this, China spends much less on health care than other developed nations. 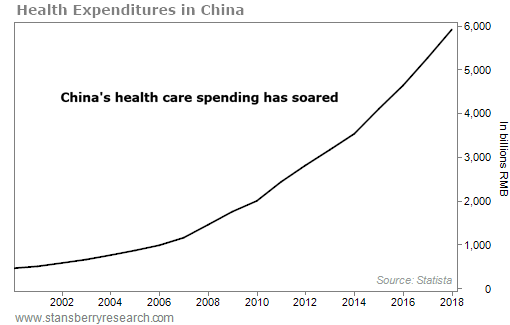 Since 2000, Chinese health care spending has been growing at a compound annual rate of 15.2%. That's three times faster than the spending growth in the world's largest health care market to date – the U.S.

If the average Chinese citizen spent just half of what his American counterpart spent on health care each year, China's health care market would be double the size of the U.S.

Of course, that's not going to happen overnight. But it tells you just how big this market can grow.

No one's interested in investing in China right now... in health care especially. But don't let that cloud your judgment.

China's health care sector is a giant in the making. And for long-term investors, it's an area of the markets you should consider owning now.

P.S. My colleague Steve Sjuggerud is following this story, too. And he shared a simple way to profit from it in the most recent issue of his True Wealth newsletter, which he released on Friday. If you're interested in Steve's favorite way to invest in this trend, and you'd like to learn more about True Wealth, click here.

Just last year, China launched the fastest and largest wireless network. With its economy returning to normal, this means China's online-services market could be a big winner in the coming years... Learn more here: The Unexpected Winner of Today's Coronavirus Outbreak.

Exchange-traded funds are a powerful tool that can hold some of the biggest and best companies. They're consistently used by the most legendary investors around. And now, investors in China will have access to the same high-quality, professionally managed resources... Read more here.