Emerging Markets Are the Big Winners in a Dollar Decline
By Steve Sjuggerud
Wednesday, September 23, 2020

The dollar is in a major decline. And as I explained yesterday, there's good reason to expect it will continue.

With that in mind, savvy investors should be asking themselves one question... How do I make the most money when the dollar falls?

There are plenty of ways to do it... You could buy precious metals like gold and silver. Or you could invest in U.S. stocks.

Both are smart moves. But there's one area that will likely lead to even bigger gains... emerging markets.

In fact, history shows that buying emerging markets in times like these is the best way to profit from a dollar decline. And it could easily lead to hundreds-of-percent gains.

Emerging markets are the global economies that are on the rise, but not yet at the developed level of the U.S. Think about places like China, India, and Brazil, just to name a few.

A falling dollar takes a huge weight off these markets. That's because emerging market companies often hold a lot of debt in U.S. dollars.

This can make for tough times when the dollar is getting stronger. These businesses get paid in local currency, after all. If that currency is falling and the dollar is rising, it makes paying debts with local money more difficult.

The opposite happens when the dollar declines. It's almost as if these companies see portions of their debt evaporate. And it makes the underlying business much stronger... and more valuable.

It's a virtuous cycle that can lead to massive stock market winners. But it doesn't happen often.

Emerging markets performed fantastically during much of the decline. The MSCI Emerging Markets Index rallied more than 150% from 1987 to its peak in 1990. Check it out... 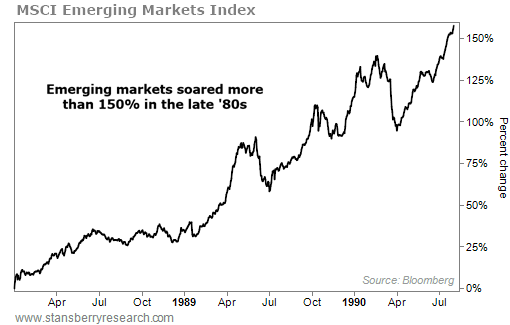 This rally in emerging markets crushed U.S. stocks over the same period... The S&P 500 Index was up just 57%.

That's the powerful effect a falling dollar can have on emerging market stocks. And it happened again a decade later...

Over that time, emerging market stocks went on one of their best runs in history. 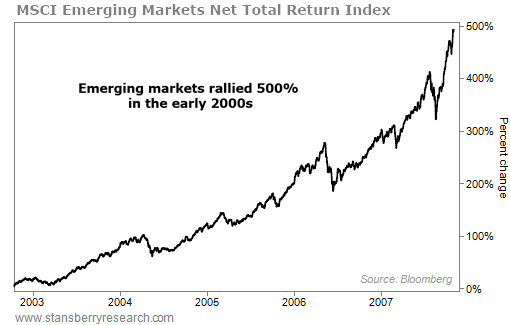 There's no question... If you know a dollar decline is coming, emerging markets are one of the best places to put money to work. Period.

Thanks to the Fed's easy-money policies, the dollar is already falling. It's down double digits since March. And that's likely the start of a multiyear downtrend.

Emerging markets should be one of the biggest winners as this trend plays out. And I urge you to own them today if you don't already.

P.S. This trend is one my colleague Brian Tycangco has been tracking closely. He sees a multiyear bull market setting up in emerging markets... with even blue-chip companies experiencing exponential growth. And his unique background makes him the perfect person to find the right stocks to buy. You can watch his rundown on what's happening for free right here.

"Pumping more dollars into the system doesn't just cause asset prices to rise," Steve says. It's true that these monetary policies are a tailwind for stocks. But it also has broader implications for U.S. currency... Get the full story here: The Bear Market No One's Paying Attention To.

"Most U.S. investors don't spend as much time thinking about investing overseas as they should," Chris Igou writes. This is especially true with the current economic conditions in the U.S. Thankfully, this group of foreign stocks can lead to fantastic gains when they start breaking out... Read more here: This Basket of Foreign Stocks Could Rally 24%.

Market Notes
A 10-FIGURE FINE... THEN RIGHT BACK TO OLD WAYS

In 2012, international banking giant HSBC (HSBC) coughed up a $1.9 billion fine. It had failed to prevent criminals from hiding their dirty money by shifting it among different HSBC accounts around the world. The bank promised it would improve, and shares began to recover. But as we’ve seen before with untrustworthy banks, the good news didn’t last…

This week, leaked files revealed another $80 million scheme – which began just months after that promise. This time, a Ponzi scheme was scamming money from folks in the U.S. and Latin America, and HSBC let the fraudster transfer the money into Hong Kong accounts. According to the files, HSBC actually spotted the fraud… then looked the other way. This is just more bad news for a company that was already hit hard by the COVID-19 pandemic.

HSBC shares are down more than 50% over the past year, and the latest scandal sent them down to a new multiyear low. When a company doesn’t inspire trust, don’t count on investors to stick around… 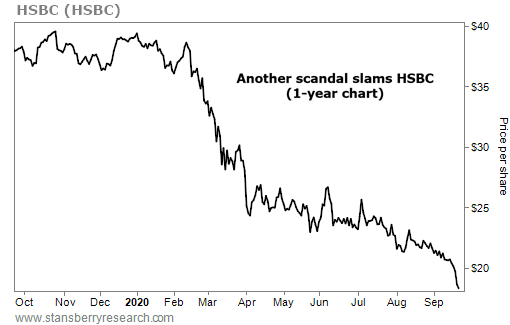