This Basket of Foreign Stocks Could Rally 24%
By Chris Igou
Monday, September 14, 2020

Not all foreign markets are equal...

Some are like China... integral to the global economy. But some are like Venezuela... plagued with issues that keep it from being worth a real investment look.

Regardless, most U.S. investors don't spend as much time thinking about investing overseas as they should. And that's especially true today – because one basket of foreign stocks should be on your "can't ignore" list.

It's a group of stocks from the next "up and coming" markets. And this basket of stocks is breaking out to new highs now.

History shows that we could expect strong outperformance from here... including the potential for a 24% gain over the next year.

The group of foreign stocks I'm talking about goes by the name "BRICs." It stands for Brazil, Russia, India, and China.

These countries have been on the up-and-coming list for decades. And they continue to mature with every year that goes by.

These markets have a history of volatility. So they aren't the kinds of assets a conservative investor would want to buy and hold for years. But here's the thing...

If you can buy this basket of stocks when they're breaking out, it can lead to fantastic profits.

You see, the MSCI Emerging BRIC Net Total Return Index, which holds a broad basket of stocks from these countries, has hit nine new highs since 2001. And eight of those nine instances led to more gains over the next year.

That matters because this basket of stocks recently hit a new 52-week high. Take a look at the iShares MSCI BRIC Fund (BKF), which tracks this underlying index... 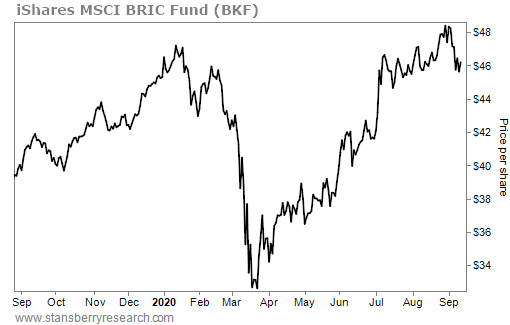 These stocks recently broke out to new highs. And history says the uptrend is likely just getting started.

Since 2001, similar events have led to massive outperformance compared with a simple buy-and-hold strategy. Check out the returns in the table below...

Buying a basket of these stocks has led to solid gains over the past two decades. Investors could have made 12% per year since 2001. But buying after new highs blows that return out of the water...

Similar instances have led to 7% gains in three months, 12% gains in six months, and a 24% gain over the next year. Those are fantastic upside numbers. And we've got the chance to take advantage of them right now.

You don't have to do anything tricky. You can simply buy the iShares MSCI BRIC Fund (BKF), which we charted above. It holds a basket of stocks from these four countries. And based on history, it's a smart bet to make today.

P.S. If you want to do even better investing in emerging markets, you've got to check out the new presentation from my colleague Brian Tycangco. He sees a massive boom coming in this area of the world. And he's found several ways to take advantage of it that he believes could triple your money or more. I urge you to check out the full story here.

To learn more about the opportunity we're seeing in emerging markets, catch up on some of our recent essays here: