Exactly What I Do With My Own Money
By Steve Sjuggerud
Wednesday, December 30, 2020

Steve's note: My job is sharing the best investment recommendations I can find with my readers. But I still get the same question all the time... What do I do with my own money? The answer is simple, as I explain in the essay below...

"How do you invest your own money, Steve?"

People ask me that all the time...

Some of these folks are looking for a very technical answer (like what percentages I invest in stocks and bonds, and how I come up with those).

Others are actually just looking for a hot tip. (The best hot tip is this: There is no such thing as a hot tip!)

I will share with you what I do with my own money today...

Upfront, you need to know that what I do with my money is probably NOT the right thing for you to do with your money.

However, if you know the rules, and if you are strong enough to cut your losses when necessary, you can consider doing what I do...

I can sum up what I do with my own money very simply:

I wait for the fat pitch.

I am often "under-invested." I don't typically own a lot of stocks just because "I'm supposed to." Instead, I wait for an extraordinary situation – a fat pitch.

The idea of "the fat pitch" comes from the most successful investor of all time... Warren Buffett. He said:

I call investing the greatest business in the world because you never have to swing. You stand at the plate, the pitcher throws you General Motors at 47! U.S. Steel at 39! and nobody calls a strike on you. There's no penalty except opportunity lost. All day you wait for the pitch you like; then when the fielders are asleep, you step up and hit it.

Fat pitches don't happen often. Sometimes you have to wait years for them to appear.

For example, I thought my fat-pitch opportunity in U.S. real estate would never appear...

I'd been an investor for decades, but I'd never bought U.S. real estate as an investment. It was never cheap enough for my standards. It was never a fat pitch.

I thought I'd gotten it wrong. Plenty of people around me had gotten rich through real estate. But I had an aversion to borrowing money... And I didn't see the dramatic upside potential.

Then it happened... We had the worst real estate bust in generations. And mortgage rates hit their lowest levels in generations. I got my fat pitch. And I swung, starting in 2011.

Before the "great bust" in the U.S. real estate market, I had never bought any property in the U.S. (except for my home) – because I never saw my fat pitch. Now, Florida real estate is the biggest part of my investment portfolio, by far.

Fat pitches like the great real estate bust don't come along every day. Personally, I have been very patient...

I swung the bat just three times in the last 10 years.

Here's what I did:

Fat Pitch No. 1: In late 2008, I saw a fat pitch coming in stocks. I bought all I could – and I even took out a home-equity loan to buy even more. That's the only time I've ever done that. I was a bit early – the real bottom was March 2009. But it worked out fantastically... I paid off the home-equity loan a little more than a year later out of my profits.

Fat Pitch No. 2: In 2011, I started buying Florida real estate heavily. I may have gone overboard... but the fat pitch was too good. In one deal, I bought a couple hundred acres for 90% less than they were worth under contract just two years before. And I also signed a contract to sell a condo for twice what I paid for it – after buying less than three and a half years before.

Fat Pitch No. 3: In 2015, I started building up a portfolio of microcap gold-mining stocks. This sector had lost more than 90% of its value in the previous four years. It was the cheapest it had been in a generation, at least.

Like U.S. real estate years ago, I had never invested a significant chunk of my money in gold stocks – until then.

By buying small gold stocks in late 2015, I was a full three months early... Fortunately, I didn't lose much. Importantly, I cut my losers when they hit new lows, and I added to my winners. Then gold stocks took off!

I was up dramatically.

Waiting on "the fat pitch" works for me... But it is challenging.

I think about life in a unique way. I think that 98% of the time, life is ordinary. The other 2% of life is extraordinary moments...

If you are capable of recognizing those "2% moments" and acting on them to the fullest extent possible, then you can potentially generate extraordinary returns.

I am constantly on the lookout for those extraordinary moments in life and in investing, and I try to make the most of them.

Whether this way of thinking is right or not doesn't actually matter... I believe it – and it works for me!

Again, I am not suggesting that you follow my "fat-pitch" way of investing. But if you want to know what I do with my own money, and how I think about it... now you know...

P.S. My friend and colleague Austin Root specializes in extraordinary opportunities. His model portfolio of small caps has soared more than 70% since January... while the S&P 500 went up roughly 15%. These smaller and microcap stocks could soar the most as the market melts up – so now is the time to own them. You can learn more right here.

"Anacondas aren't interested in fair fights," Dr. David Eifrig explains. "They'll only strike when the odds are overwhelmingly on their side." Waiting for the right moment is a great strategy for minimizing risk – and building wealth... Learn more here.

"Make just one great venture-capital investment, and you'll probably never have to worry about money again," Matt McCall writes. Importantly, ordinary investors can profit from the venture-capital mindset... Get the full story here.

Today, we’re looking at a leader in the beverage industry…

Monster Beverage (MNST) is a $50 billion energy-drink giant. It owns several widely known brands such as Monster, Burn, NOS, and Full Throttle. By sponsoring extreme-sports athletes, Monster has developed a “cool” brand image among younger consumers – who will have years to depend on Monster for their caffeine hits… Whenever drowsiness starts slowing them down, they grab another can. In the most recent quarter, Monster raked in nearly $348 million in profits, up 16% year over year.

As you can see, MNST shares are soaring. They’re up nearly 80% from their March lows, recently hitting a new all-time high. As long as customers keep craving a quick energy boost, this company should continue performing well… 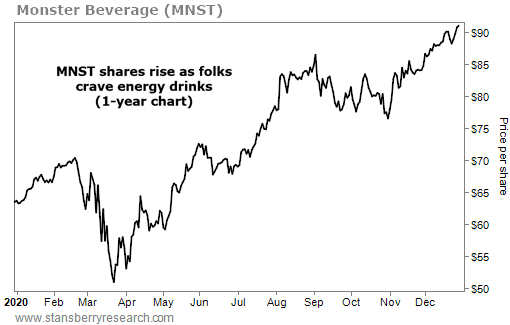