Falling for Financial Doom and Gloom? Not So Fast
By Matt McCall
Thursday, October 28, 2021

It's not inflation or supply-chain problems. It doesn't matter what the Federal Reserve does with interest rates.

These are the problems the financial media wants you to focus on...

Why? A newspaper adage that still holds true today is, "if it bleeds, it leads." When it comes to financial coverage, a story about an imminent market crash is always going to get top billing over a story about more upside ahead.

Fear sells. And the media preys on that fear.

But all these doom-and-gloom stories do is scare ordinary Americans out of the stock market.

That doesn't mean that inflation isn't out there... It is. Nor does it mean that the Federal Reserve's money printing won't have ramifications for the nation down the line... It will. These are serious issues with serious consequences. I'm not downplaying that.

But that doesn't mean you should have all your money in cash, or that you should sit on your hands for the next 10 years. Let me explain...

I'm a bit embarrassed to say that I was once a huge part of the media machine...

Over the past 20 years, I've appeared more than 1,000 times as a featured financial expert on Fox News, Fox Business, Bloomberg, CNBC, and CNN... I've also been featured in the Wall Street Journal and countless other financial publications.

Being on TV was great. It made me feel like a celebrity. I'd walk around New York City and folks on the street would recognize me.

But today, I regret my television past.

At some point, I started to notice that I was beginning to "drink the Kool-Aid."

In fact, if you've ever acted on something you found on TV or in the newspaper, you've probably made a few bad long-term investment decisions.

In an experiment by "gold standard" behavioral economists Richard Thaler, Amos Tversky, Daniel Kahneman, and Alan Schwartz, learning more information about short-term market moves ended up losing investors a significant amount of money... even if that information was completely accurate. As they wrote in the Quarterly Journal of Economics...

Providing such investors with frequent feedback about their outcomes is likely to encourage their worst tendencies... More is not always better. The subjects with the most data did the worst in terms of money earned.

The investors who got their information less frequently and traded less outperformed those who received information more often. And not just by a little bit. Their returns were twice as high!

And as my personal hero, the legendary investor Peter Lynch, noted in his seminal work One Up on Wall Street...

Stock market news has gone from hard to find (in the 1970s and early 1980s), then easy to find (in the late 1980s), then hard to get away from. The financial weather is followed as closely as the real weather: highs, lows, troughs, turbulence, and endless speculation about what's next and how to handle it. People are advised to think long-term, but the constant comment on every gyration puts people on edge and keeps them focused on the short term.

Lynch published his book more than 30 years ago... And Thaler and company published their research nearly 25 years ago. Yet they relate to today's environment more than ever.

Do you think the financial media cares that its single-minded focus on short-term market action is likely doing more to hurt investors today than any other market event in the past 50 years?

The more you listen to them, the less likely you are to buy and hold the winners that really matter for your portfolio...

For example, in the past decade, we've gone through three presidents, multiple Fed chairs, trillions of additional dollars printed, debt-ceiling debates, wars, natural disasters, and a global pandemic... and yet the stock market has more than tripled.

That's huge. This is the best-performing bull market since World War II. And many individual stocks are standouts in the overall rising tide.

Right now, finding those select "10X" and "100X" winners is all that matters for your retirement.

You might buy a few of these ultimate 100X winners. But will you own them long enough to capture the real gains?

You're far more likely to give in to the fear that the media thrives on. They'll give you a thousand reasons to sell. And they'll make you feel smart about selling... until you realize that you missed out.

All through this incredible bull market – and despite the unprecedented rally that followed the COVID-19 crash – the financial media's "narrative of fear" hasn't changed one bit. Today, the easiest and quickest way to get attention and an invite on a financial news show is to make a huge prediction about an imminent market crash.

This sort of media environment is totally and incredibly wrong. And it's leading millions of everyday Americans to give up on stocks... and lose the hope of getting the type of retirement they deserve.

Don't be one of them. Tomorrow, I'll explain why the next rising tide of investment gains will rival even the dot-com boom... and why now, more than ever, falling for the doom and gloom is a mistake you can't afford.

Editor's note: The real danger to your retirement is the fearmongering you'll hear on the mainstream media. And you need to take it seriously... because the wave of 100X winners Matt sees coming over the next decade could make all the difference to your financial future. He recently went public with the full details – view his presentation here.

"We're entering what I've called the Roaring 2020s," Matt writes. The bull market is still going strong today. And by investing in the companies at the forefront of a massive growth trend, we could see life-changing gains over the long term... Read more here: This Is a Hypergrowth Megatrend You Don't Want to Miss.

"We are standing at the beginning of an incredible convergence of technologies that will revolutionize almost every aspect of American life," Matt says. And no matter how much you fight it, the future has already arrived... Get the full story here: The 'Easier, Better, Safer' Trend With 100X Potential Upside.

Market Notes
THIS PAYROLL COMPANY SHOWS THE ECONOMY IS THRIVING

Regular readers know we often use certain companies as real-world economic indicators. These “bellwethers” provide goods and services that are essential to our economy. So if they’re doing well, other businesses should be doing well, too. Today’s payroll-processing company is a prime example…

Paychex (PAYX) is the largest human-resources provider for small to medium-sized businesses, serving more than 710,000 clients in the U.S. and Europe. It helps these companies pay employees, file taxes, and manage benefits. And as COVID-19 cases continue to ease up and more folks return to the workforce, many recovering businesses are looking to Paychex. In its most recent quarter, total sales hit $1.1 billion – up 16% year over year and more than Wall Street had expected.

As you can see, shares of PAYX are up about 145% since their March 2020 low. And they recently hit a new all-time high. This success demonstrates that the economy is humming along today… 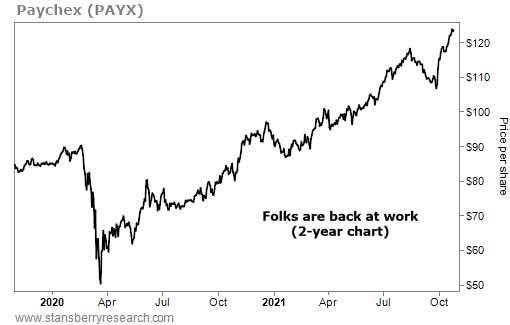