Well that was quick!

U.S. stocks fell a little more than 3%... over the course of two weeks. That was it.

You would think that the coronavirus concerns gripping China (and the world) would cause massive panic and fear in stock prices. And it sure felt like they were... for a moment at least. But it didn't last long.

Instead, the U.S. market hit new all-time highs just a week after bottoming. And it has continued higher since.

This, my friend, is the Melt Up.

When stocks are hitting new highs like this during a legitimate epidemic, it tells me that "FOMO" – the fear of missing out – is finally starting to take hold in stocks. And that is the Melt Up in action.

I've been writing about the Melt Up for years. I first unveiled the idea at a private meeting in 2015.

Since then, I've written dozens of articles... hosted events... and made recommendations to profit from the coming mania.

There's been a problem, though. We haven't seen true market euphoria since then. And if you understand what a Melt Up is, you know euphoria is part of the deal.

The Melt Up is the final push of a major bull market. It's the time when investors throw caution to the wind and BUY, BUY, BUY!

There's no concern for fundamentals. Folks don't worry if what's happening makes sense or not. They simply get caught up in the mania to a degree they can't control.

Back then, just about everyone I know was talking about bitcoin. And even worse... they started buying near the top.

It seemed like every news story was about bitcoin or some other crypto soaring. And it wasn't just the financial media. Non-financial media covered bitcoin as well. It was so big that the masses wanted in.

Folks with no real knowledge of bitcoin were buying hand over fist. They were caught up in the mania. It was a truly global phenomenon.

The same thing happened with housing in the mid-2000s...

The number of realtors in my part of north Florida exploded. Many of my friends began flipping houses. Heck, even my plumber shut down his plumbing business to flip houses full time. The money was too good to pass up.

Everyone believed housing couldn't go down. And that fueled a euphoria that completely took over. It was a true Melt Up in U.S. housing.

I remember my mother-in-law beaming about her gains in Qualcomm (QCOM) stock back then. And I had friends who quit their jobs to day-trade full time. They were getting rich... on paper at least. Until it all came crumbling down.

Today, we're entering a similar time of euphoria. I know it because of what we've just seen in the markets. Despite rampant fears, stocks quickly jumped back to new highs after a minor – but seemingly painful – fall.

My mother-in-law is interested in stocks again, too. Just last week she told me about her position in Apple (AAPL), and how well it did last year.

This is it, my friend. The Melt Up is here.

I have been waiting for this moment. This is the stage where the big gains finally start to kick in. It has taken entirely too long to get here, in my opinion. But it's here now.

This isn't the time to sell. We want to join the masses now... and profit from the FOMO in the markets while we still have a chance.

P.S. This major market shift is why I hosted a massive Melt Up Event last week. I wanted to get the word out on this crucial market shift. And more importantly, I wanted to share how I plan to make the most profits as the Melt Up plays out. If you haven't seen the event, you can still view it for free right here.

Just understand, the replay will only be up for a short time. So don't wait too long – go here to watch it now.

We're in the middle of a Melt Up today. Stocks are at new all-time highs and investors are showing signs of optimism once again. But the market can still soar much higher from here... Get the full story: 5,000 on the S&P Is Closer Than You Think.

"As we enter 2020, you must be in stocks if you want to grow your wealth," Matt McCall writes. There will be ups and downs in the months ahead, but if you invest in the right companies, you could make big money... Read more here.

Market Notes
HOW THE NEWS MAKES MONEY IN A DIGITAL WORLD

Today, we’re checking in on a unique corner of the digital revolution…

People are increasingly getting their news from online sources… In 2017, nearly half of Americans cited an online publication as their primary source of information. It’s a key reason why Apple (AAPL), Facebook (FB), and Google’s parent company Alphabet (GOOGL) are all investing in their own news services. But today’s company is ahead of the curve…

New York Times (NYT) is a $6.5 billion media-publishing giant. Although the company has a long history in print media, it has been moving away from physical papers in favor of online subscriptions. And that switch is paying off… Last month, the company reached its goal of $800 million in digital revenue – a year sooner than it expected. It also added more than 1 million digital subscriptions in 2019, a new record.

As you can see in today’s chart, NYT shares have soared to new highs. The stock is up nearly 60% over the past year alone. As long as this company continues to succeed with its shift to digital, the gains should continue… 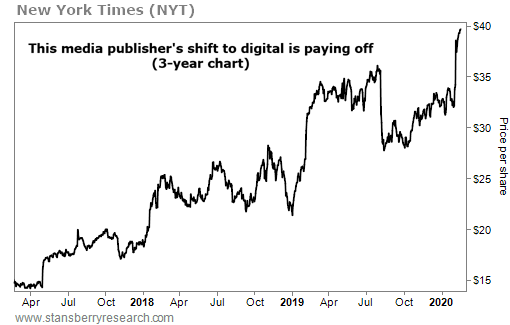