Housing is getting weirder by the day...

Soaring mortgage rates threw an ice bath on the hot real estate market. Home sales have slowed to a crawl in one of the most aggressive declines on record.

But prices still haven't crashed. Instead, we've got gridlock. Sellers still want last year's high prices and easy sales... But buyers can't afford to buy the homes that are available.

Most folks think this will end in another housing crash. But they're missing the other possible outcome... that the gridlock in housing will continue.

If you want to make the case that a housing crash is coming, you're likely to trot out one piece of data: existing home sales.

That's simply the number of existing homes that are selling each month. Sales soared in 2020 and 2021's hot market, hitting a decade-plus high.

But now, mortgage rates have frozen both buyers and sellers in place. And existing home sales have entered a huge slowdown... down 24% over the past year.

That's a massive fall – one of the largest year-over-year declines in history. Take a look... 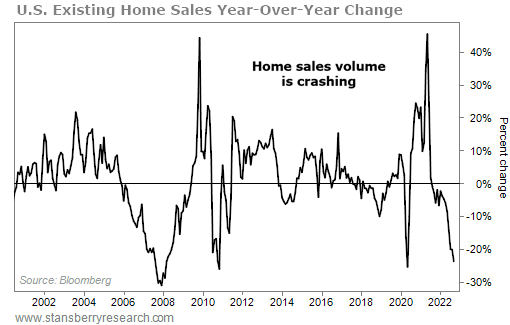 This chart looks like a housing bust in the making. Heck, you're probably thinking that it's already underway.

Housing hasn't crashed, though. The median existing home price is down just 7% since June. Plus, June tends to be the seasonal peak for the year, meaning much of that decline is due to seasonal changes.

Instead of a price crash, we have a stalemate. Sales are down big... But also, fewer folks are trying to sell.

You can see this in the following chart. It shows the number of months needed to sell the entire inventory of existing U.S. homes at current sales rates. Take a look... 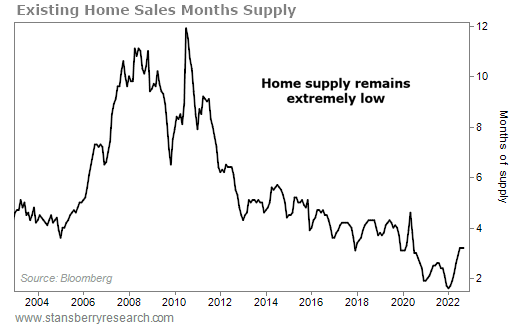 Most folks would expect the months of supply to have soared, given the slowdown. But the number is only up slightly. And today's supply level is still well below what we saw for most of the past decade.

Importantly, this chart factors in the slump we've seen in home sales. That means inventory levels haven't risen at all. No one wants to buy or sell right now.

If you put it all together, the lack of a housing bust makes sense. Homes aren't selling... But no one's trying to sell, either. So it's still tough to find low prices if you want to buy in this tight market.

This standstill won't last forever. And the end result could be a decline in home prices. But we'll still need to see a flood of homes hit the market for prices to fall... And that's not guaranteed to happen.

That means until this setup changes, we should expect the gridlock in housing to continue.

"Any letup in mortgage rates will ease the pressure on the housing market," Brett says. That's important because, right now, one measure suggests that we could see some relief – even if interest rates continue to rise... Learn more here.

Folks are scared of another housing bust. But we're not likely to face mass foreclosures and crashing prices today. One key metric for homeowners explains why... Read more here: Don't Bet on a 2008-Style Housing Bust.