How to Earn Low-Risk Income... With a Strategy Born From Mania
By Dr. David Eifrig
Friday, July 10, 2020

The origin of one of my favorite investing strategies traces back to the 16th century... when a French botanist introduced an exotic Turkish flower to Europe.

As the tulip made its way from Austria to Germany, Holland, and England, it created a sensation.

The flower soon became the focus of one of the earliest recorded financial manias. As growers cultivated more and more varieties of colors, demand exploded, and almost everyone wanted the newest-colored bulb.

The tulip mania led to increases in prices that make the U.S. housing boom of the 2000s look tiny by comparison. At the height of the 17th-century boom, a single black bulb fetched 17 times the annual wages of a skilled laborer... and totaled more than $50,000 in today's dollars.

Believe it or not, this mania helped create a unique income strategy that we can use today. While some people use this tool to make risky trades on volatile stocks, it was intended to help you reduce your risk.

And we can even use it to collect thousands of extra dollars every month...

A mania over tulips is hard to picture today. But it happened – and it caused some truly wild behavior.

Again, one of the most prized flowers was the black tulip. Rumor has it that the first person to own a black flowering tulip sought out other black bulbs, bought them, and smashed them. That way, he remained the sole seller of black buds from his one and only black tulip plant.

By the mid-1600s, tulips were traded in designated places all over Holland. Trading invited speculation, which stoked the mania.

To bring order to the market and reduce their risk, florists in 1636 started demanding money upfront for protection against the possibility that their buyers would renege on their deals nine months later when the bulbs were brought out of the cellars...

If you owned bulbs, you could collect money up front in exchange for agreeing to sell bulbs in the future.

And voila... Dutch florists and the Dutch national parliament had created one of my favorite modern moneymaking tools. They were selling options.

When the bubble burst in the spring of 1637, those who sold the options had partially protected themselves by collecting money earlier. But those who were the buyers lost everything.

Today, people often think of this way of trading as risky. But its real role – dating back to its innovation – is to reduce investor risk.

The truth is, this strategy is one of the most misunderstood and misused financial vehicles on Earth. The popular press – and even your broker – will tell you it's guaranteed to lead to financial ruin. But that's just not true... if you understand how to trade them.

The way most people use this strategy increases the risk to their capital. Most options advocates like to tout buying options, rather than selling options. When that's the focus of your trading, it's a lot easier to pile up frequent losses and fewer gains.

But my technique is meant to decrease the risk to our capital.

Done safely, selling something called a "put" option is a fantastic way to earn income. This technique is slightly different from what the tulip sellers did. But it draws on the same basic idea...

When you sell a put option, you're agreeing to buy a stock below the market price within a set time. You get paid for making that agreement. If the stock never drops below that price, you get to keep the cash – free and clear. And if the stock does drop below that price, the cash ensures you get a discount to that price. It's like getting paid to buy stocks at a discount.

Here's the real beauty of this strategy: When you sell options, you don't have to be exactly right about how or when a stock will move up in price. Many factors work in your favor. So even if the shares stagnate, you still profit.

For years, I've shown readers how to dramatically alter their retirements for the better...

We can use this technique immediately to make "overnight" income on what I consider "must own" investments... while assuming less risk than we would take on by simply buying shares.

Your only requirement here is that you must be open to a new investment idea.

Editor's note: You can use Doc's technique to set yourself up for "overnight" income starting immediately... and potentially collect thousands of dollars every month, with very little risk. In fact, last year, this strategy handed some Americans the opportunity to make more than $30,000 in extra cash. Learn how it works right here.

"I don't expect you to put your money on the line without understanding exactly what we're doing," Doc writes. He's a big believer in education, especially as it pertains to finances. That's why he detailed his entire process for options trades... Read the full essay here: Giving Away the 'Secret Sauce' to Successful Option Trades.

It's a common misconception that options are dangerous and only increase your risk. But when used correctly, the exact opposite is true. And with all the volatility in today's market, limiting your downside is extremely important for protecting your wealth... Learn more here: One of the Best Trading Strategies for Today's Market.

As regular readers know, we use certain companies as real-world economic bellwethers. They tell us if products and services are in demand, and whether or not money is moving through the economy. The coronavirus pandemic continues to disrupt the country, but today’s company shows that the broad recovery is underway…

Saia (SAIA) is a $3 billion trucking company with 169 shipping terminals in 44 states. When the economy is struggling, folks buy less and the demand for shipping declines. Saia did make 16.2% fewer shipments per day in April compared to the year before, but that decline had already slipped to a 9.2% year-over-year dip by May. And to prevent illness-related disruptions, the company quickly tweaked its processes to minimize face-to-face interactions.

SAIA shares slumped nearly 40% from late February to early April. But they’ve nearly doubled since then and recently hit a new all-time high. Saia’s recovery paints an encouraging picture of our recovering economy… 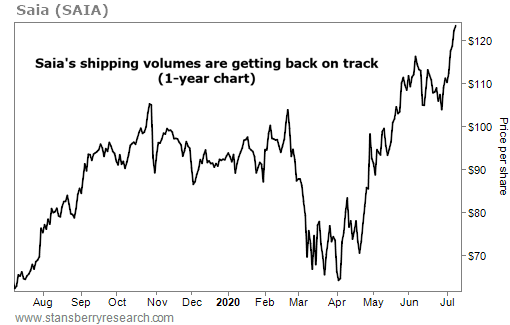