Three Ways to Use Bitcoin Before the Blockchain Revolution
By Eric Wade
Wednesday, November 13, 2019

Steve's note: You've probably heard a lot about cryptocurrencies like bitcoin. But you might not know how they work – or what they're good for. I don't cover the crypto markets myself... So we're sharing an essay from our "crypto guru" at Stansberry Research. My colleague Eric Wade has made incredible returns in this space. Today, he lays out the surprising uses of bitcoin – now, and in the future...

I answer a lot of questions from my readers. A few weeks ago, one of my readers sent me one that surprised me...

He told me that he doesn't see the utility of bitcoin. And I'll admit, it isn't obvious at first.

Most people know bitcoin is a volatile digital asset. But how useful is bitcoin? What good does it do you to own it, as opposed to gold, or a car... or any other crypto, for that matter?

Today, I'll show you three big ways that bitcoin has utility. But most of all, I'll show you why those three reasons are just the beginning... because to really answer this question, you have to take the long view.

First, bitcoin is a store of value. If you own one bitcoin, you own one. It can't be taken away.

This confuses a lot of people. They think of a "store of value" as something that will store the value of your dollars. Bitcoin isn't like that. It fluctuates in relation to U.S. dollars and other currencies... So it's possible to put more dollars in and take fewer dollars out.

But bitcoin is a store of value – in the most literal sense. If you own 2, 3, 5 bitcoin, those are yours. They cannot be taken away unless you sell them or you lose them. By contrast, the fiat money in your bank account is always subject to seizure by the IRS, creditors, and others.

And it isn't just that... Remember, bitcoin is finite. One of the Federal Reserve's primary goals is devaluing or inflating the dollar by 2% a year. In May 2020, bitcoin's inflation rate will fall to 1.8% (and over the years will eventually fall to zero). That means that even if demand for bitcoin stays flat, its price should rise relative to the dollar – which we know for a fact the Fed is actively working to devalue.

The dollar has lost roughly 98% of its value over the past 100 years. It's a system that punishes savers and encourages spenders. Bitcoin, on the other hand, is designed to reward long-term savers with ever-decreasing inflation.

Second, bitcoin is also by far the most common unit to trade with on most of the crypto exchanges. So even if you wanted to buy another crypto, you would most likely buy bitcoin as a first step... You buy bitcoin or Ethereum, and then you can use those to buy the other token you really wanted.

Finally, you can't interact with the bitcoin blockchain without it. This one takes a little explaining...

If you're not familiar, the blockchain is a public ledger that records all transactions that take place on its network. Because everything is verified publicly by the world's most powerful network of computers – and because the network is decentralized – it's an incredibly secure system. And it's going to change the way we send money securely in the future.

So, for one thing, if you buy bitcoin with fiat currency (like dollars) and move them to a digital wallet, that transaction is recorded on the blockchain – and the transaction fee has to be paid in bitcoin.

But it's much more than that. Because of the blockchain, bitcoin can't be copied. It can't be faked. It can't be hacked. Forget about counterfeit bills or cybercriminals trying to get into your bank account. That's the benefit of using the blockchain – and bitcoin, a secure form of digital currency.

These are three simple reasons why bitcoin has utility. But I want to mention one more thing...

You see, the future utility of bitcoin is hard to predict today.

Think back to 1994 or 1995, and imagine that someone told you, "You have Ethernet. We've had it for years. You can either plug that into your computer to access the Internet... or, you can have a wireless connection, which is a lot slower than Ethernet."

You might have said, "Well, who needs wireless on your computer? I have Ethernet. If I really need to get online, I can plug into that wherever I go."

For a long time, millions of computers were sold without any wireless capabilities... even after wireless was invented. Now, Wi-Fi is everywhere. No one wants to do without it.

There was a gap in time when the utility of Wi-Fi wasn't obvious to everyone. Bitcoin is at that stage now.

You might think to yourself, "Oh, what's the utility of that?" As I've shown you today, we do have answers. But the bigger point is, we almost certainly don't know everything that bitcoin will be used for... or how widely it will spread.

I believe the next generation will build things we haven't even imagined yet with blockchain, bitcoin, and other crypto tokens. None of us imagined in 1994 that one day, we'd have iPhones with more computing power than the Apollo 11.

So keep this in mind. The best is yet to come.

In the meantime, bitcoin is just an unstoppable digital store of value... that can't be counterfeited, hacked, or duplicated... with billions of dollars' worth of value transferred over its network every day.

If that isn't utility, I don't know what is.

Editor's note: On Wednesday, November 20, Eric is sitting down with a 12-term U.S. congressman to discuss a radical new crypto some experts have called "the next bitcoin." It's trading for less than a penny today... And it could soon shatter expectations by fulfilling one of bitcoin's original functions, with 10-bagger potential or higher. To learn more, save your spot for the free online event.

"Wall Street is coming to the crypto space," Eric says. "And there won't be enough bitcoin to go around." With more and more big names piling into crypto, prices could climb faster than anyone expects. Get all the details here: You're Running Out of Time to Invest in Bitcoin.

Wyoming could become the world's "Crypto Valley," according to Eric. In 2018, the state passed legislation that broke new ground for crypto investors. But that was just the beginning... Read more here: This Could Change the Future of Crypto for Decades to Come.

Today’s chart paints a bullish picture of the economy…

As regular readers know, we use different sectors as real-world economic bellwethers. For example, when big banks are hitting new highs, it means Americans are financially stable… When construction materials are in high demand, it tells us cities and corporations have money for new buildings… And when delivery stocks surge, we know folks are buying things…

United Parcel Service (UPS) is the world’s largest package-delivery company. It owns 251 cargo jets and about 130,000 other delivery vehicles, spread across more than 220 countries and territories. The UPS shipping network is part of the backbone of our e-commerce world… And shipping volume increased in the most recent quarter around the world, led by a 9% year-over-year jump in U.S. domestic shipments.

UPS shares fell last year on fears of economic contraction… But with shipping volumes rising and profits surging, they’ve jumped more than 25% so far this year to a new 52-week high. When UPS is doing this well, it tells us consumers are still spending freely… 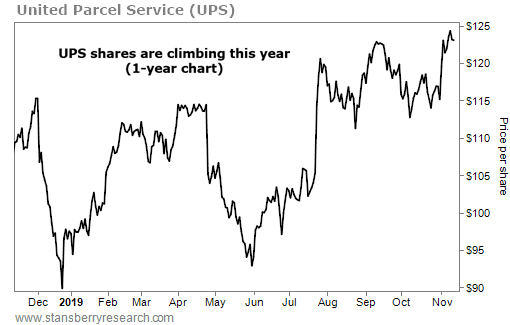