Millennials Are Growing Up... And It's Driving This New Boom
By Dr. David Eifrig
Thursday, June 25, 2020

Folks my age love to complain about millennials...

According to stereotypes, they're lazy, entitled, and need constant praise.

You've also probably heard that millennials have been coddled by their parents and therefore rely on them too much.

I won't comment on the first few claims... Though, I will note that nearly every generation of parents has written off their kids as lazy... and in return, the kids have dismissed the older folks as out of touch. Either the human race has constantly gotten lazier over time (a real possibility) or folks do the same dance over and over again.

I'll also admit that millennials have had a rough go. Many joined the workforce at a tough time – the years surrounding the financial crisis. And they did so after a multidecade period of high inflation in education and housing costs.

They've also had to endure this current crisis with more than 30 million Americans losing their jobs. It hasn't been an easy start to their careers.

So while I won't discuss the millennial work ethic, I will dive into the stereotype that does have statistical merit – and, for our purposes, plays a big role in our economy...

It's a fact that young adults born between 1981 and 1996 depend on their parents more than previous generations... especially financially.

A November survey from investment firm Merrill Lynch tells it all: Nearly 60% of adult Americans ages 18 to 34 said they could not afford to get by without financial support from their parents.

And 75% of millennials define success as having "financial independence from their parents," rather than building up personal wealth.

That's a much different story than previous generations...

Back in the day, young people were expected to get a job and contribute as soon as they left college (or even once they turned 18). But many millennials were able to take "gap years" or decide which European country to backpack across as young adults. As a result, millennials have entered the workforce much later in life than previous generations.

Millennials have also been living at home longer. High student debt, skyrocketing costs of living, and stagnant wages have made it hard for some to move out of mom and dad's house.

Almost one in five young adults are living with their folks now. That's a higher percentage of young adults doing so in the U.S. than at any other point over the past couple decades... 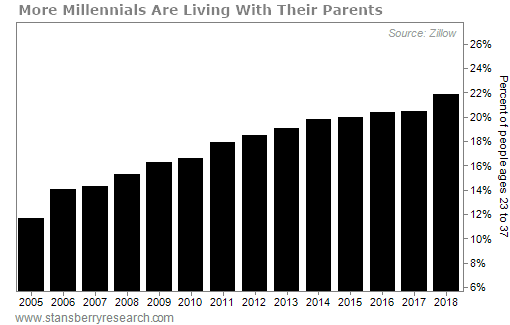 This has led to constant mainstream headlines saying that millennials will never buy homes or have children... and that those developments would lead to a decline in the overall housing market.

But such ominous predictions were premature...

Millennials are growing up. The younger end of their generational bracket graduated college within the last few years, and the top end is getting close to 40 years old.

And as millennials age, they're having children... building careers... and buying their own houses (even if they still need some financial help from mom and dad).

It's contributing to a boom in housing.

Now, for conservative investors, "boom" is a dirty word. A "boom" implies a "bust"... and suggests it's coming soon. When the stock market is booming, some feel it's time to be cautious.

But real-world booms are different.

This isn't a speculative boom. This isn't about house-flipping and investment properties.

Rather, there just isn't enough housing to go around.

After the housing bust of 2008 and 2009, homebuilders stopped doing their jobs. They stopped building new homes. And over the past several years, they've been trying to play catch-up.

But even still, not enough homes are being built. New housing starts recently plummeted below their long-term average because of the coronavirus... 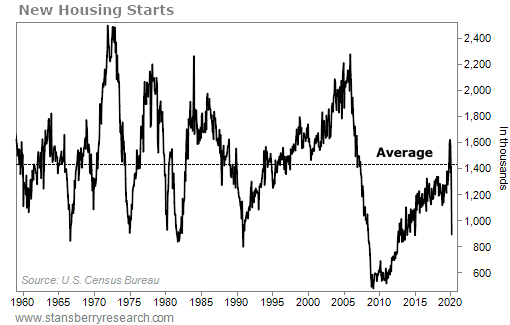 Currently, there are not enough homes on the market to meet demand. U.S. existing home sales inventory is near an all-time low... 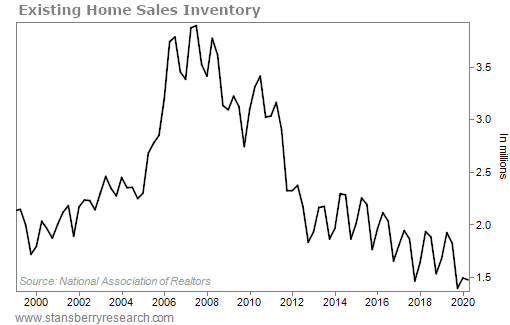 With so few existing homes on the market, new homes need to be built.

A recent report from real estate broker Redfin also found that new homes are becoming a larger share of the market. One in five homes for sale in April were new homes... compared with just one in six the year before.

It has been a fact for a couple years that demand for housing is greater than supply.

Plus, with interest rates likely to stay at near-zero for the next couple years, we should see plenty of new buyers taking advantage of low mortgage rates. It's the perfect combination for a boom in real estate.

Millennials just recently took over as America's largest generation... And that's going to be a strong tailwind for the housing market.

P.S. My team and I have liked the long-term outlook for housing for a couple years now. And we're not the only ones... My colleague Steve Sjuggerud has been bullish on real estate since the bottom of the bust.

Last night, for the first time ever, he held an online event to discuss his path to making big profits in real estate. He even showed attendees a brand-new kind of investment opportunity that has been off-limits to everyday investors until recently.

We've never covered anything like it in Stansberry Research's 20-year history... If you missed it, you can still watch a replay of the event right here.

"If you want to make real estate investing work for you," Steve writes, "you've got to work for it." Buying real estate as an investment might sound scary or time-consuming, but if you're willing to roll up your sleeves, it can lead to fantastic returns... Read more here: One Secret to Success in Real Estates.

"We have a 'perception versus reality' mismatch – which is something I absolutely love to see as an investor," Steve says. In states where taxes are lower and winters are warmer, locals think out-of-state buyers are buying at the top. But the reality is much different... Get the full story here: The Exodus to Florida (and Texas) Is ON.

Amid the coronavirus lockdown, millions of people abruptly found themselves exclusively working from home and shopping only online. This change has been a tailwind for cloud-based software providers, since so many people must connect, collaborate, and shop through the Internet. And today’s company is a leader in that industry…

Adobe (ADBE) is a $210 billion software company. Its products let you create and edit PDF documents, design websites, edit videos and images, or sell products online. Customers buy subscriptions to Adobe’s products and can use them on any computer, anywhere. And folks need that more than ever today. Adobe sales hit a record $3.1 billion in the most recent quarter, up 14% year over year.

ADBE shares are up about 370% over the past four years, and they recently hit a new all-time high. As people get used to working remotely, demand for Adobe’s software will only get stronger… 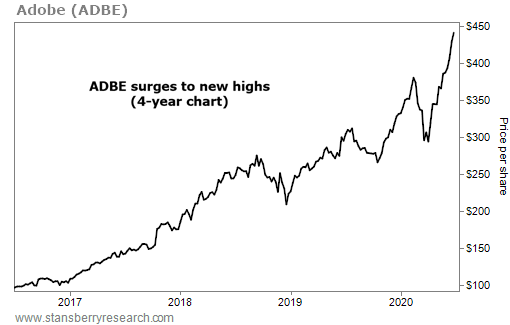