'Nobody Thinks' the Meme Stock Bubble Is About to Go Bust
By Dan Ferris
Wednesday, February 16, 2022

Editor's note: We've covered why stocks still have room to run. But we can still see speculative pockets in the market... And as our colleague Dan Ferris explains, they spell disaster for unwary investors. Today, we're sharing an excerpt updated from his January 7 Stansberry Digest essay. In it, he shares how the meme-stock mania is still leading folks astray – and where to look for real opportunity...

"What's clear to the broad consensus of investors is almost always wrong..."

That's from a piece by investor and author Howard Marks, called "Everyone Knows."

Marks published the memo for his Oaktree Capital clients in April 2007... six months before the S&P 500 peaked. The index ultimately fell nearly 60% through March 2009.

Marks wrote at the time...

Take, for example, the investment that "everyone" believes to be a great idea. In my view by definition it simply cannot be so.

If everyone likes it, it's probably because it has been doing well... it's likely the price has risen to reflect a level of adulation from which relatively little further appreciation is likely... [and that] there's significant risk that prices will fall if the crowd changes its collective mind and moves for the exit.

I would add that "Everyone Knows" is the flip side of "Nobody Thinks"...

Everyone Knows stocks aren't going anywhere but up... and every little dip is a buying opportunity. Nobody Thinks a major bear market is around the corner.

And when Everyone Knows every stock is a buy, dramatically overvalued businesses with no prospects go up 30% instantly – just because their management teams use the right buzzwords.

GameStop buys and sells old video games and systems... in an age of cheap, abundant, ever-changing, ever-improving computers and software. It's a dying, money-losing business.

And yet, GameStop's share price soared more than 30% after hours on January 6. The reason? A report from the Wall Street Journal that the company is planning to launch a division that will develop a marketplace for non-fungible tokens ("NFTs").

The company has also said it's entering into partnerships with crypto companies to share technology and co-invest in game-development projects involving NFTs and blockchain technology. GameStop has hired more than 20 people to do all this.

However, to be clear, GameStop hasn't accomplished anything yet... It hasn't built this NFT marketplace. Other platforms are already emerging as low-fee alternatives in the space. As for NFTs in gaming assets, demand is based on pure fad and speculation – and in fact, as many have covered, surveys show they're widely hated by developers.

GameStop knows it can't make it as a retailer. And the company might have the best intentions to see this plan through. That doesn't change the fact that it's doomed...

It's all a bunch of blue sky and hot air. It won't do anything but attract more idiots to the company's already insanely overvalued stock.

Ultimately, sure enough, little has come of the latest 30% pop. Shares are now trading below their prices at the start of that jump.

But Everyone Knows GameStop is going to the moon – and Nobody Thinks it's a zero.

Remember when a handful of companies inserted the word "blockchain" into their names to make their share prices go up a few years ago... only to see them crash when the speculative boom ran out of fuel?

This latest initiative from GameStop is just like that. It's not a sign of a healthy market.

Everyone Knows value investing is dead and buying fast-growing companies is the only way to make money in stocks. Nobody Thinks the old cycles are still intact and that – just like at the peak of the dot-com boom – great companies' share prices are about to fall 80%, making this a great time to buy cheap value stocks and sell overvalued growth stocks.

Everyone Knows the stock market will never fall more than 20% in a single day – as it did on Black Monday in 1987 – because the exchange will shut down. Nobody Thinks the market is not a man-made machine, but a natural phenomenon beyond our control.

I could go on. But by now, you get the picture... The consensus is dangerous.

It will all go in reverse on the way back down. Capital for mergers and acquisitions will dry up, brilliant entrepreneurs will go begging across Silicon Valley, naïve speculators in GameStop will get wiped out, and everyone will start talking about the big indexes making new lows – not new highs.

But right now, Nobody Thinks that can happen.

That will continue until – at the bottom – "everyone" will know stocks are dead money forever... And "nobody" will think it's a good idea to invest in decent, profitable businesses with sound prospects. They'll be too afraid of stocks falling more than they already have.

We're a long way from there. But now is a good time to look to the pockets of contrarian opportunity already available. I've been seeing them in cannabis and silver-mining stocks recently. Others will certainly materialize in the weeks and months ahead.

Just give it time... Time is the great healer, the great destroyer, and the only arbiter of truth.

Editor's note: One of the biggest contrarian opportunities Dan sees today is in gold. That's why he recently went public with his No. 1 gold stock idea in an urgent interview. It's not a miner, explorer, or exchange-traded fund... And with the market emergency he sees coming, he believes it's especially important right now... Learn more here.

"In financial markets, 'following the herd' only looks wise – until its utter foolishness is revealed," Dan writes. Right now, investors are snatching up any speculative stock they can. But you don't have to make the same mistakes as the average person... Read more here: The Fools Can't Find a Risk They Don't Like.

When investors are pouring record amounts of money into any asset, no matter how expensive, it's a sure sign that we're in a bubble. And when it bursts, you need to be prepared for the fallout... Learn more here: Speculative 'Can't Lose' Psychology Is On the Loose.

Market Notes
THIS COMPANY HAS A NEW INNOVATION IN 'VICE'

Philip Morris (PM) is a $170 billion tobacco company whose 130-plus brands include the bestselling Marlboro cigarettes. But with health concerns and regulatory pressures, fewer folks are smoking cigarettes these days… So Philip Morris has spent $8.1 billion to develop less harmful smoke-free products like its IQOS heated-tobacco and e-vape brand. IQOS’s 21.2 million customers last year included 15.3 million people who quit smoking conventional cigarettes… but who still keep coming back to Philip Morris. In the last fiscal year, smoke-free products made up 29% of the company’s total revenue.

As you can see, PM shares are up more than 20% over the past two years. And they recently hit a new multiyear high. As more people switch to new vices, this tobacco giant is ready to serve them… 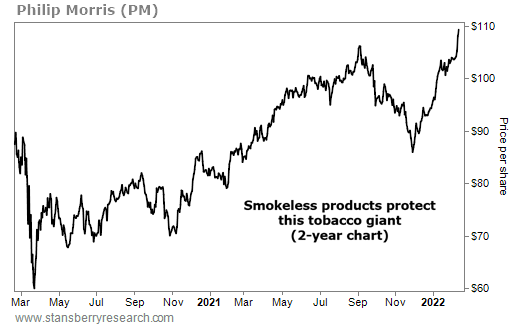