On February 14, 1962, America's sweetheart opened up the most famous house in the world...

She walked the CBS News correspondent through many of the rooms while explaining her work to renovate the home. She talked about preserving furniture of the past as a way to honor the history of the presidency and the country.

Around the world, 80 million people tuned in to watch.

Jackie loved beautiful homes. And it's no wonder... After her mother remarried in 1942, she spent her youth at her stepfather's stunning Virginia mansion known as Merrywood.

Merrywood boasts 23,000 square feet, indoor and outdoor pools, and a lighted tennis court. The house is an architectural gem, with a garden by renowned landscape architect Beatrix Farrand and sweeping views of the Potomac River.

So it's a bit odd to see this piece of American history now owned by the Saudi Arabian government...

The Kingdom of Saudi Arabia bought the mansion in May 2018 from Steve Case, co-founder of AOL. The kingdom paid $43 million (the Virginia county values it at $23 million).

It's not the only property Saudi Arabia owns in the U.S... or even on that block. The Saudi government owns five separate homes on the same side of the street as Merrywood. Two of those purchases were made in July 2018.

And it's not just U.S. real estate Saudi Arabia is buying.

The kingdom paid an estimated $810 million for a stake in 891 European hotels in February 2018 and has pledged to invest $20 billion in Blackstone's infrastructure fund.

Huge piles of wealth are funneling into real estate deals like these all around the world. For example, Norway owns nearly 50% of a portfolio of 12 properties in New York's Hudson Square. And prior to the trade war, China bought more U.S. residential real estate than any other foreign country.

It's a result of the "global savings glut." You see, there's so much money out there (more than ever before) that it's keeping interest rates low because investors need somewhere to keep their money.

Thanks to compounding, new economic activity, and population growth, global wealth reached $116.9 trillion in 2000... which more than doubled to $317 trillion in mid-2018, according to Credit Suisse's "Global Wealth Report."

This has led to massive mountains of capital. And investors worldwide are searching for a way to either earn returns or stay safe.

All this money has chased stocks higher. And international investors have bought up bonds so that yields are near zero or negative in some cases.

My friend and colleague Steve Sjuggerud has written about this phenomenon here in DailyWealth. Here's what he said in August...

The better option, of course, is taking a bit more risk in the U.S. stock market. And that's the thing I expect a lot of global investors will realize in the months ahead.

Today, real estate prices in cities across the world are 45% higher than they were at the previous peak in 2007. After dropping to around $200 billion in the year following the 2008-2009 financial crisis, direct investment is at around $800 billion today.

And institutions like pension funds and other investment managers have steadily increased their allocations to include more real estate. In 1980, about 2% of institutional assets were in real estate. Today, it's 10.5%.

Earning 5% to 6% by renting out real estate sounds like a great deal compared with bond yields. This means the global chase for returns will keep pushing real estate higher... Invest accordingly.

P.S. This same trend is driving stocks higher... In fact, on February 12, Steve will air a huge prediction on just how high the Nasdaq could go by the end of the Melt Up. He'll also show you how to know when this bull market will end – and, as a special treat for those who tune in, he'll share the name and ticker of a stock that could rise 500% in the coming months.

It's completely free to watch the event online. I hope you'll mark your calendar... You can find more details right here.

"Sometimes, you need a salesperson," Vic Lederman writes. But with algorithms taking over the housing market, there's a good chance your real estate agent will soon be replaced with a robot... Get the full story here: Robots Want Your Not-So-Special Home.

"We're a long way from the depths of the housing crisis roughly a decade ago," Chris Igou says. Since then, the demand for housing has returned and real estate prices have soared. And with homebuilders catching up to demand, there's still plenty of upside left in housing... Learn more here.

Market Notes
A SELL-OFF, A RECOVERY â AND QUICK-DOUBLE-DIGIT GAINS

As regular readers know, the market can overreact to bad news about a great company… and solid stocks can sell off in a hurry. But they can turn around just as quickly, which is when savvy investors can win big. Today’s chart shows what happens when the market makes a mistake – and later, when it figures that out…

Planet Fitness (PLNT) is a fast-growing gym chain. Low membership rates and a welcoming vibe extend the appeal beyond hardcore fitness buffs. But last summer, many big index funds had to sell their shares when PLNT outgrew the small-cap Russell 2000 Index. Sales growth also fell just shy of Wall Street’s estimates. Shares sold off… and jumped back up after Planet Fitness went back to beating expectations in the next quarter, with sales rising 22% to $167 million.

As you can see, PLNT shares have recovered from their October lows, soaring 50% and hitting new all-time highs. When a great company sells off, things are often going to get “less bad”…

(By the way, Enrique Abeyta of Empire Financial Research pinpointed this exact opportunity for his readers in October. To learn more about his Empire Elite Trader service, click here.) 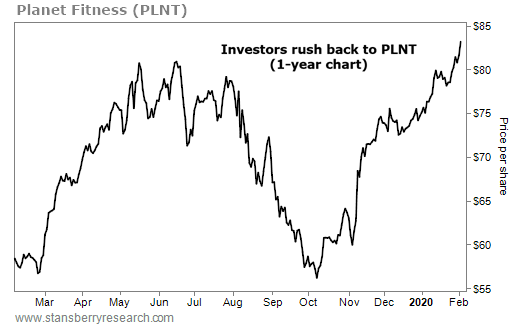