Rushing Back Into Stocks? Don't Get Burned by Today's 'Robots'
By Marc Gerstein
Monday, December 19, 2022

Editor's note: Inflation is cooling – but as we've already seen, volatility isn't dead. That's because sentiment tends to follow the same patterns... even when the world has changed. In this piece, we hear from Marc Gerstein, director of research at our corporate affiliate Chaikin Analytics. Read on to learn what investors should watch for next...

The market rejoiced when the latest inflation update came out last week...

The CPI result was a bit lower than the projected 7.3% increase. And it was well below the 9.1% peak in June. In short, the Federal Reserve's inflation-fighting strategy seems to be working.

But that didn't stop the central bank from raising interest rates another 50 basis points on Wednesday.

The good news is that the Fed has broken the CPI's upward momentum. However, the war against inflation isn't over yet. Another big battle lies ahead...

I explained a crucial idea to Chaikin PowerFeed readers back in October... We're dealing with "demand-pull inflation."

That just means too much money is chasing an inadequate supply of goods and services.

This time, the excess money came from all the stimulus in the wake of the COVID-19 pandemic. And with shortages of all sorts of goods, that money chased limited supplies.

The Fed (or anyone) can't just snap its fingers and fix the problem. It can't just create more goods and services to match the excess supply of money.

So the Fed is doing the only thing it can...

It's raising interest rates to suppress the money supply and demand for goods and services.

We don't know how much more economic pain will occur before the money supply and economic activity realign. But we can turn to history for some critical clues...

Specifically, I'm talking about the early 1980s. That's the last time inflation caused this much trouble in the U.S. And here's how things played out with the CPI back then... 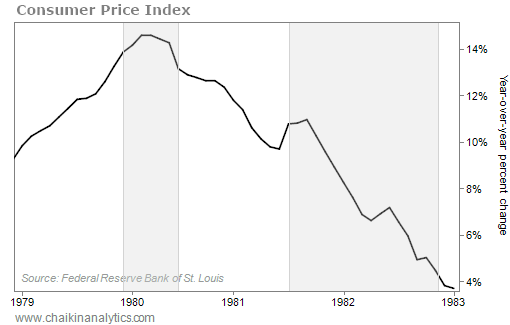 The shaded areas on the chart indicate recessions.

As you can see, we experienced a six-month recession in early 1980. Then, we endured a longer recession well after the Fed won the first round of its fight against inflation.

As mid-1982 approached, investors still hated inflation rates above 5%. The playbook of hiking interest rates to fight inflation was new and unproven. And many folks feared that inflation would soar back up to double-digit percentages.

Then, on August 17, 1982, Salomon Brothers Chief Economist Henry Kaufman – nicknamed "Dr. Doom" for his harsh prognostications – told the world that disinflation was happening.

Many folks didn't believe it at first. But before long, enough investors bought into the idea to launch stocks into a mega-rally that lasted for the better part of 40 years.

That rally got started near the end of the longer recession – a little less than two and a half years after inflation started to soften.

In other words... investors remained wary for a very long time.

This is where the 1980s-era precedent gets murky...

These days, we're seeing bursts of hope and caution. The markets swing wildly on every little bit of news. And it's hard to tell how much is being driven by investor sentiment alone.

"FOMO" – the fear of missing out – is much more prominent today than in the 1980s, too. With information traveling so rapidly, no one wants to be late to the recovery.

There's another new twist these days...

The markets didn't have as many institutionally unleashed "robots" back then.

The company I worked for in the 1980s had mandatory rounding conventions for estimates. My manager would've yelled at me if I estimated $1.04 per share instead of rounding it to $1.05.

It's much different today. If a company reports $1.04 per share in earnings versus a Wall Street consensus estimate of $1.05, the stock might fall off a cliff.

Automatic selling worsens these kinds of moves. And a similar result could happen if the CPI isn't "perfect" in next month's update.

Sure, the world has changed. But the thing is... sentiment still plays a major role. That's true even if it's robot sentiment.

And history tells us that investors can stay skittish – even when the worst is over.

Keep that in mind. The November numbers are still good news... But don't blindly rush back into stocks after one good inflation report.

Editor's note: The truth about interest rates today is more nuanced than most folks realize... So if you're thinking about "buying the dip," make sure you get the full story from Chaikin Analytics founder Marc Chaikin.

This Wall Street legend recently shared his full road map for all of 2023... including why the Fed's approach could determine whether you make huge gains or suffer massive losses next year. Don't miss Marc's urgent briefing... You can watch it right here.

"Even though consumer confidence bottomed in 1980, the next bull market didn't start immediately," Marc Chaikin writes. We're seeing echoes of this today. Consumer sentiment recently neared record lows. And that means it's critically important to make the right moves with your money... Learn more here.

"The world now knows that higher rates will work," Chris Igou says. This is a major turning point – and not just for the U.S. As the Fed's moves take effect, it's creating a tailwind most investors might not expect... Read more here: What to Buy as U.S. Inflation Falls.