"Katie, I'm sorry... but we might sell your car," my buddy Dave told his daughter a few weeks ago.

Dave and I were watching the England-Italy soccer match when he gave her the news. And her reaction was probably what you'd expect...

Used car prices have gone nuts. It makes up a huge proportion of the high inflation that's gripping the economy. But as I'll share today, you don't need to worry about it... And I mean that.

The June Consumer Price Index ("CPI") data surprised everyone. It was up 5.4% over the last year, the largest jump since 2008. "Core" inflation (stripping out volatile energy and food prices) was the highest since 1991.

Inflation is obviously here in a big way. And it's darn scary... not just for investors, but for just about everyone. The question is, will it last?

The short answer is "no." The inflation we're seeing right now is temporary. It's the result of a supply and demand imbalance... one that will correct itself.

You know the stories of why the supply of new cars – for example – is low:

Problems like these decimated the inventory of new cars for sale. That caused the prices of used cars like Katie's FJ Cruiser to soar.

That's crazy, because everyone knows cars are a liability, not an asset. In the real world (not the COVID-19 world), as soon as you drive a car off the lot, it loses value. 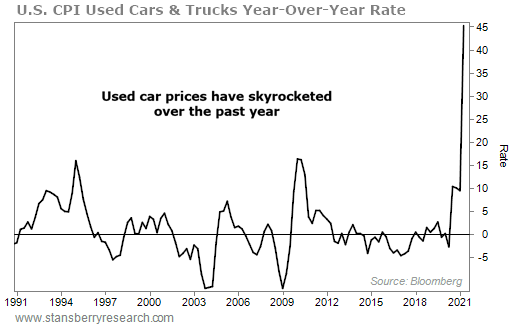 These numbers are insane. But this situation will end... guaranteed. The problem with the supply of new cars will go away. The inventory of new cars will return. And then, used car prices will fall – possibly a lot. This is simple economics.

I think the main inflation we are seeing now is temporary (and totally separate from the long-term risk of the value of our dollar falling, which is very real)...

Today's near-term inflation is caused by COVID-induced imbalances, like we're seeing in the car market. As an example, the massive spike in used car prices in June was responsible for more than a third of the increase in inflation that month.

Supplies are tight. Meanwhile, demand is massive right now. That's because the economy is "back" in a big way...

I live in Florida, where the economy has been back for a while... Real estate prices have gone up incredibly quickly. Between the COVID-19 "refugees" moving here from major cities and the low supply of building materials and labor, prices have soared. It's happening so fast that the businesses that try to estimate home values simply can't keep up...

The house two doors down from me was recently valued at $2.6 million on Zillow and Redfin. Someone just bought it for $3 million – and then proceeded to gut it completely, down to the framing. They will put in at least a million bucks from here. So Zillow and Redfin weren't even close in estimating the price gains on this house here in North Florida.

Now, I realize that this is just one house. But the story is the same all along the Florida coast...

South Florida is even crazier than North Florida. My wife and I were there a few weeks ago, and we spent time with high-end realtor Heidi Wicky from Palm Beach County. Prices are up as much as 50% in two years in the more desirable areas – and there is no supply. It is a seller's market for sure.

Those imbalances will work themselves out in time... And when they do, inflation will fall. It's really that simple.

So, if inflation is worrying you, try to ease up a bit. Things aren't nearly as bad as they seem.

P.S. I have another unconventional idea for you right now... Today, for the first time in more than four years, I'm letting folks in on my "secret sauce." It's a totally contrarian way to invest – one that has led me to 43 double- and triple-digit winners in the past 10 years alone. You can learn all the details right here.

When the Fed pumps trillions of new dollars into the economy, each individual dollar is worth less than it was before. And since folks are expecting that loss of value to continue in the future, that creates a major opportunity... Get the full story here: The Most Contrarian Bet You Can Make Today.

"Jaw-dropping valuations are a classic hallmark of a Melt Up," Chris Igou writes. And even though we're in the final inning of the Melt Up, that doesn't mean the good times have to end today... Read more here: You Shouldn't Stress About Sky-High Valuations.

Today, we’re looking at a leader in the fast-food industry…

As regular readers know, companies that sell “addictive” products have high profit potential. From alcohol to sugary foods, these are habit-forming products that folks can’t stay away from. Today’s company sells the greasy foods that keep folks coming back for more…

Yum Brands (YUM) is a $40 billion global fast-food chain leader. It owns popular brands such as KFC, Taco Bell, and Pizza Hut, boasting more than 50,000 restaurants in more than 150 countries. And folks are scarfing down drumsticks, burritos, and slices of pizza there today… Yum Brands recently reported that same-store sales increased 23% year over year in the most recent quarter, and digital sales topped $5 billion.

As you can see, YUM shares have steadily climbed over the past year. They’re up nearly 50% and recently hit an all-time high. As long as folks still crave their favorite fast foods, this uptrend should continue… 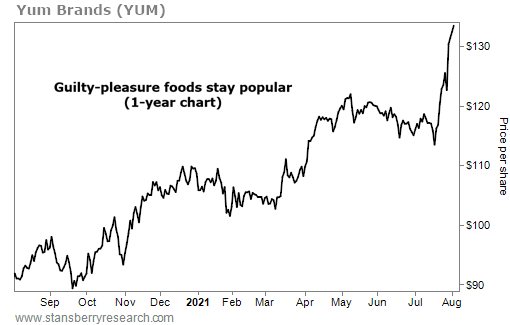