Last October, we saw an incredible setup in a part of the market many investors ignore – small caps.

These stocks were trading at a near-50% discount to their larger peers when I first highlighted the massive value disparity in DailyWealth.

I shared how small caps were likely to outperform as a result. And that's exactly what's happened since...

This is starting to close the valuation gap. Today, small caps are trading for the smallest discount to the S&P 500 in more than a year.

Don't expect this trend to reverse, though. Small-cap stocks have plenty of upside left.

Markets take turns in the limelight. Large caps will beat out smaller companies for a few years... And then the exact opposite will be true.

After underperforming for most of the last decade, small caps are starting to catch investors' attention once again.

The small-cap-focused Russell 2000 Index has tripled the return of the S&P 500 since mid-October. That kind of move is closing the valuation gap I highlighted at the time.

We can see this using the price-to-book (P/B) ratio for each sector. It measures how expensive a market is based on its assets.

Today, small caps trade at a 34% discount to large caps based on this measure. That's the smallest discount in more than a year. Take a look...

You can see the discount has been closing quickly. It moved from a multidecade low to much more normal levels. But the chart also shows that this gap has much more room to close from here.

Now, it's happening again. Small-cap stocks have tripled the return of large caps since October. But the move is far from over.

If you're interested in taking advantage of it, the iShares Russell 2000 Fund (IWM) offers a simple way to make the trade. It tracks the benchmark Russell 2000 Index and should move higher as this trend continues.

In short, today's valuation gap between small caps and their larger peers is closing. But with the discount still at 34%, there's plenty of upside left in small caps.

It might sound obvious, but the best way to make life-changing gains is to invest in small companies before the herd catches on – and hold on for the long term. That's why Austin Root put together a list of the four attributes that make a small company worth owning... Get the full story here: The Four Attributes of a Moonshot.

Small-cap stocks aren't the only sector that are likely to outperform over the long term. With the end of the Melt Up in sight, now is the time to make sure you're ready for the Melt Down... Read more here: The Most Obvious Long-Term Bet in Today's Market.

Market Notes
THIS COMPANY IS HELPING POWER THE E-COMMERCE INDUSTRY

Regular readers know the COVID-19 pandemic has accelerated the “retail apocalypse.” Many brick-and-mortar retailers have had to close their doors forever, while others have been forced to move their business online. Those that have hopped on the e-commerce train have done well – and they’ve been a major tailwind for today’s company…

Shopify (SHOP) is a $160 billion e-commerce platform. Its software serves more than 1 million retail businesses worldwide… helping them set up online shops, launch marketing campaigns, accept payments, and more. As COVID-19 has driven many physical shops to start selling online, Shopify has seen a rise in demand for its services… Third-quarter revenue from its Subscriptions segment alone – which gives users access to its e-commerce platform and tools – was up 48% year over year to $245 million.

As you can see, SHOP shares have rocketed 300% from their lows last year. They’ve also recently hit a fresh all-time high. As long as the e-commerce industry remains strong, SHOP’s success should continue… 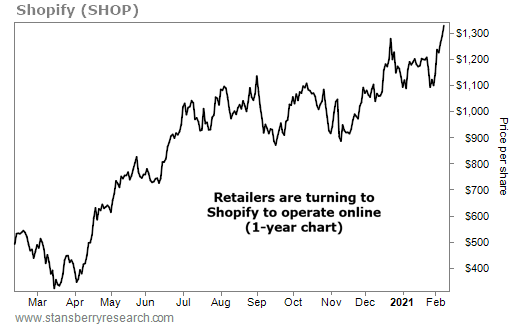