The world's central banks are shouting from the rooftops.

They're becoming increasingly more vocal about their market outlooks and policies... talking about lower interest rates, more asset purchases, and rounds of quantitative easing. Not a week goes by without a market-moving message from at least one of the world's central banks.

I'm sure you can hear what they're saying. But what are they actually trying to tell us?

Today and tomorrow, I'll discuss what central banks are doing – and the hidden meaning behind it that could decide the fate of this bull market.

Central banks – including the U.S. Federal Reserve – are all publicly making the same argument: The state of the economy requires more "accommodative monetary policy" to help stimulate inflation and growth, both of which are below desired levels.

This of course means that already low interest rates are going lower.

Currently, more than $10 trillion in government debt around the world provides a negative interest rate. (This means, for example, that if you invest $100 in a German bund at current prices, it will be worth only $93 in 30 years. Yet "investors" are lining up in droves for this!) And banks are essentially telling us we should expect these huge piles of negative-yielding debt to be the norm for years to come.

But the overt statements by the Fed and others are just part of the story. What's more important to the markets today is actually what the banks are implying. Do you see the hidden meaning behind their aggressive quantitative easing?

I believe that I do. And I want to share the decoded message with you, because it provides a road map for how we should invest going forward.

If you agree – and if I'm right – you should be able to continue generating solid investment returns while the rest of the world sheepishly waffles.

Economist David Rosenberg highlighted the first data point back in August with this tweet...

We now have had three months of a 3-mo/10-yr yield curve inversion. The track record this has had in predicting recessions: 100%.

Other famous economists have also flagged this data point. One went on to say that this inversion will soon put the market into a "death spiral."

The clock is still ticking. We're now at five months since this yield curve inverted. Clearly, this first data point is decidedly bearish for the market.

But just one day after Rosenberg's tweet, C. Scott Garliss – our own market expert and head of Stansberry NewsWire – pointed out a different type of inflection point...

In other words, when stocks yield more than bonds, it's historically a great time to be invested in equities. (And that's even before you consider the longer-term earnings and dividend growth you'll enjoy with stocks that you won't get with bonds.)

Clearly, this second data point is decidedly bullish for the market. And we certainly enjoyed a strong rally to close out 2019.

So which data point will take over from here? Which way will the market go next?

My answer is simple: As long as we are not about to enter a recession, stocks will continue to push higher.

I hope longtime readers are getting used to this message. Stock prices can bounce around in the short term. But they only really drop in a big way when the economy is in a recession. Otherwise, they continue to grind higher.

So... are we on the brink of a recession?

My view continues to be "no."

And here is where decoding central bankers' implied messages becomes so important. You see, I believe – when you read between the lines – these monetary authorities are telling us: "No recession allowed."

In the past, the world's central banks waited until after a recession began to roll out aggressive economic stimulus programs. But this time, they want to get out ahead of a slowdown and press the stimulus pedal down NOW.

They are willing to go to extraordinary measures to keep the global economy moving upward. They're driving savings rates to zero – or lower – to push more dollars into riskier, more productive assets. They're making debt financing rates dirt-cheap to encourage more growth and capital expenditures. They'll use their entire monetary tool kit to keep the economy rolling.

On August 23, Fed Chairman Jerome Powell spoke at an economic conference in Jackson Hole, Wyoming. It was a speech that clearly disappointed Wall Street. The market plunged 3% that day. But buried within his speech was a key quote that was not lost on us here at Stansberry Research.

Powell said: "We will act as appropriate to sustain the expansion."

Tomorrow, I'll share what this means for your portfolio in 2020. But for now, our takeaway is simple...

There won't be a recession anytime soon. The central banks won't allow it.

Editor's note: To take advantage of this bull market, you must make the right moves in your portfolio... now more than ever. That's why on January 14, we're hosting a special online event with Steve, Porter Stansberry, and Dr. David Eifrig. They'll reveal their No. 1 favorite stocks for 2020, their latest market predictions, and much more. Sign up for free right here.

"If you polled people across America," Scott writes, "there's one thing that most folks would say they don't have enough of – cash." On the other hand, your average fund manager is sitting on tons of cash. And that's a big reason to be bullish in the new year... Read more here.

"Unfortunately, no magic indicator can predict a crash," Doc Eifrig says. But the reality is, most drawdowns are insignificant. If you are willing to accept the market's natural volatility, you'll be ready for any market correction... Get started here: How to Ride out a Correction Like a 'Market Stoic.'

Market Notes
A STRONG UPTREND IN SELLING THE TOOLS OF WAR

Today, we’re looking at a company that profits in times of global turmoil…

Regular readers know that the U.S. military plays a role in conflicts all around the world. It spends billions on weapons, airplanes, and more… turning to companies that we like to call “offense” contractors. And with fresh trouble looming with Iran, the U.S. might need a lot more equipment and support services. Today’s company is ready to provide them…

Lockheed Martin (LMT) is a $116 billion military supplier. Its leading segments include planes, helicopters, and missiles… all of which could come into play in a Middle Eastern conflict. Of course, that isn’t something to hope for. But even without a fresh war, Lockheed Martin’s sales topped $15 billion in the most recent quarter – up 6% year over year.

LMT shares shot up nearly 4% in a single day last week after a U.S. missile killed Iranian Maj. Gen. Qasem Soleimani, and they currently stand near all-time highs. Whether the current situation escalates or the U.S. maintains the status quo, Lockheed Martin will keep raking in lucrative military contracts… 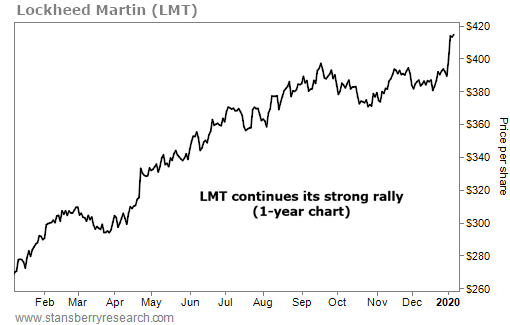