If you polled people across America, there's one thing that most folks would say they don't have enough of – cash.

That's especially true right now. We're just past the holiday season, where many Americans tend to blow their budgets and rack up debt.

Instead, these folks are sitting on tons of cash. I expect lots of it will find its way back into the markets this year. And it's a big reason why I'm bullish as we begin 2020.

Over at Berkshire Hathaway, one of Chairman Warren Buffett's biggest complaints is the difficulty of finding worthwhile investments today. He says he doesn't think there's a whole lot of value in the world at the moment. So, his cash pile continues to grow.

Through the third quarter of this year, Bloomberg estimates Berkshire held $384.9 billion in cash and cash equivalents ($281.2 billion on a net basis). The company doesn't buy back much stock, doesn't pay a dividend, and generates more than $100 million in cash daily.

Then there's investment management firm BlackRock. It's always coming up with new products that generate more cash. Which is why, despite all the company's investments, it sits on more than $4.4 billion in cash and equivalents, according to Bloomberg.

Venture capital firms are also overflowing with funds lately. In November and December, the amount of venture investments in startups went up versus the same period in 2018, according to industry data analytics firm PitchBook Data.

PitchBook also expects U.S. mega-venture deals to hit a new record in 2020. Clearly, there are more firms with cash looking for places to put it.

So why should we care?

Well, at some point, all that money will wind up burning holes in the pockets of investment managers. None of them want to sit on huge piles of cash. That means they're missing out on making more of it.

One thing you learn quickly on Wall Street is that folks who have made a lot of money always want to make more. It's one of the reasons they've been so successful.

The chart below shows the growth of U.S. money market fund assets. When money is coming out of the stock market, it often heads into money market and bond funds. And that's exactly what happened this year. Take a look... 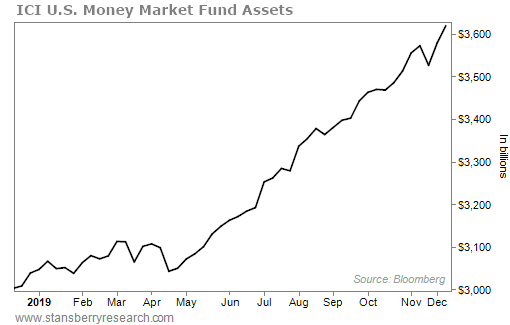 At some point, these cash-rich investors are going to get tired of doing nothing and will want to invest some of that money. It doesn't mean they won't hold on to a lot of it for a rainy day, but they'll do something – they'll have no choice.

Eventually, the pressure will be too much, and fund managers will move some of their hoarded cash into the market to capture the upside they've been missing. And I expect they'll do it in a big way.

Just a move back to early 2019 levels would mean over half a trillion dollars pushing into U.S. stocks. That's huge.

This surge of investment will do one of two things... It will either support valuations or act as a floor under the market if there's a big pullback.

Either way, it's incredibly positive for stocks. And this potential flood of cash moving back into stocks is why I'm bullish heading into 2020.

We're already coming into the year near all-time highs. But don't let that scare you. If you're invested today, the right move is to stay long.

Editor's note: To make sure you're getting the market news that really matters in 2020, check out Stansberry NewsWire. This free service is designed to be your "direct line" to Wall Street... where you'll get real-time market updates and expert commentary from Scott and his team. Learn more about it here.

"It's tough to know what to make of everything that's going on," Steve says. With so many global uncertainties, it's easy to get scared out of the markets. But if you take a step back, you'll see that things are much better than most folks realize... Read more here.

"During this bull run, analysts have tended to underestimate earnings," Scott writes. But stocks have marched higher despite Wall Street's fears. This negative sentiment is a major reason to stay long now... Learn more here.