The Big Winner After the Melt Up
By Steve Sjuggerud
Tuesday, September 28, 2021

The two traders were working at Citadel during the pandemic. It's a massive hedge fund with $38 billion in assets under management. And it's as prestigious as hedge funds get. But that wasn't enough for them...

You see, the two traders wanted to run their own shop. So earlier this year, they left one of the best hedge funds on Wall Street to start their own.

O'Keeffe and Charbaghi raised $1.25 billion – the most of any fund so far in 2021. But on the first day of trading, they did something unexpected...

They closed the fund to new investors.

That's right... So much money poured in that within a day, they were already turning investors away.

Now, this story isn't unique to these two traders. Of course, they've got incredible pedigrees. But the story is much bigger.

Let me share what's going on – and what it could mean for investors in the coming months...

Today's hot market is sparking massive interest in hedge funds once again. But the pros are closing the doors to new investors as the Melt Up rages on...

According to Bloomberg, a record 1,144 hedge funds are turning away new money. So it's too late to invest with these pros in today's hot market... And that's in spite of the crazy fees you'd have to pay to do so.

For those who aren't familiar with hedge funds, they're expensive. A typical hedge fund charges a 2% upfront fee and takes 20% of the profits.

Before the pandemic, folks had been bailing on the old hedge-fund model because of the price tag. Some 11,600 hedge funds closed from 2008 to 2020. And most of the ones that survived had to cut fees to try to compete for new clients.

That's all changing this year, though... And it shows us how hot today's market really is.

A similar story played out in the late-1990s Melt Up. Andy Kessler and Fred Kittler were two hedge-fund guys who famously turned away $1 billion in a single week. That was in 1999... months before the dot-com peak.

The two were coming off incredible performance – they made 377% for investors that year. But with so much money sloshing around, they became cautious and started sending new investors away.

Today's market looks a lot like 1999... at least based on what we see the investment pros doing. Hedge funds are turning away money in record numbers. And that huge demand means we're in the final stage of the Melt Up.

So what happens next?

Well, we can't know the exact timeline. But looking ahead, tech's massive outperformance will eventually give way to another group of stocks.

The gap between growth stocks like tech and "boring" value stocks is the widest it has ever been. The 1990s Melt Up saw the same thing play out... Tech stocks soared as new investors chased life-changing gains. And value stocks were left behind.

Nobody cared about the stodgy market standbys. They had solid fundamentals... They fit the model of good businesses that were available for cheap. But they didn't have flashy ideas – or the ability to soar overnight.

That's a major reason why people overlooked value stocks – like banks, insurers, and other boring companies – in 1999... They weren't going to reshape our future. It's much more exciting to get in on the ground floor of a revolutionary technology that will drive growth.

Then, shortly after growth had its day, value started to take off... Those who stayed in growth and ignored value stocks following 1999 took a hard hit.

We can't know when this will happen again. But we could be on the precipice of a similar shift in the market.

Tomorrow, I'll share more of what happened in 1999... and how you can follow that playbook to success when the current Melt Up comes to an end.

P.S. I urge you to tune in for our online event tonight at 8 p.m. Eastern time. I'll be joining Dan Ferris and Dr. David Eifrig for an honest, unfiltered discussion about this bull market... including what you need to do with your money before the year is out. I'll even share my latest update on the Melt Up – in a much bigger way than I can typically do here in DailyWealth. It's going to be an incredible night... Save your free spot right here.

"U.S. stocks are more expensive by any meaningful measure than at any other time in history," Dan Ferris writes. That's why right now is a great time to be prepared for when the bubble finally bursts... Read more here: Speculative 'Can't Lose' Psychology Is On the Loose.

"Nothing outperforms forever," Dan says. When growth stocks reach the end of their runway for gains, you don't have to get out of the market entirely. In fact, you can still outperform when the trend finally shifts toward value... Check out Dan's two-part essay to find out how here and here.

Regular readers are familiar with Steve’s “bad to less bad” trading strategy for buying cheap, hated assets. After shares have plunged, you don’t always need a complete turnaround to make quick, impressive gains… All you need is for things to get “less bad.” Today’s stock is a perfect example…

Macy’s (M) is an $8 billion retailer. Best known for its annual Macy’s Thanksgiving Day Parade, the company runs more than 700 stores under its three retail brands – Macy’s, Bloomingdale’s, and Bluemercury. Macy’s had to shut down many of those stores and enhance its online-shopping experience during the pandemic. But as states have reopened, folks are coming back out to shop… In the second quarter, Macy’s comparable-store sales (an important measure for retailers) jumped 61% year over year.

As you can see in today’s chart, Macy’s shares have bounced back well… They’re up roughly 300% over the past year. And they recently hit a fresh 52-week high. It just goes to show what can happen as things get “less bad”… 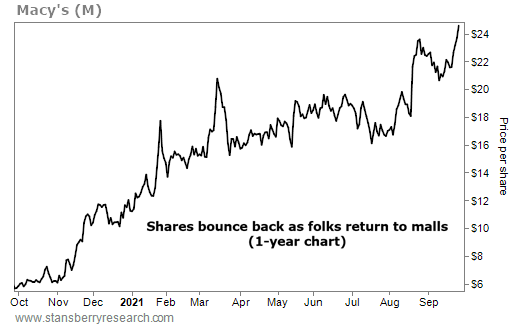