It caught a lot of investors by surprise, and even made many of them worry... But it shouldn't have.

The reality is that this "big news" wasn't news at all. And while it seems to be a major problem for Alibaba – and companies like it – the truth is quite different.

The report from Bloomberg started with this headline: "Alibaba Blocked From Hong Kong Stock Link to China."

The article went on to say, "China's largest e-commerce company... can't be included in the stock connect program linking the Asian financial hub with Chinese investors at present."

Why is this "big" news? Well, it goes against a major theme I've been writing about in our China letter in recent months.

The Stock Connect program is simply a way for investors to trade shares across China's different stock exchanges. It links the markets in Shanghai and Shenzhen with Hong Kong and the outside world.

Before the new listing, Alibaba only traded in the U.S. Now, it trades in Hong Kong as well. And if Alibaba is added to the Stock Connect program, it will allow mainland Chinese investors to buy shares of this popular company for the first time.

We could see hundreds of thousands of Chinese investors rushing to buy shares. That's one of the reasons folks are excited about owning Alibaba. The stock is up roughly 18% since its Hong Kong listing.

So any news saying that we won't see a trading link with China is going to be met with disappointment... and a sell-off. Indeed, the stock fell as much as 2% immediately after this news came out.

No company like Alibaba has been included in the Stock Connect program to date. (That is, a company with a secondary listing in Hong Kong that also has dual-class shares.)

Alibaba is the first of its kind to try. So rules haven't yet been established to cover cross-border trading of such listed stocks.

But this won't last forever. In August 2019, China and Hong Kong securities regulators already agreed similar companies could be included in the Stock Connect program – companies with dual-class shares trading only in Hong Kong.

These include consumer-electronics giant Xiaomi and food-delivery company Meituan-Dianping... And their shares have done spectacularly well.

Importantly, there's a six-month cooling-off period before a newly listed Hong Kong stock can even be considered for the Stock Connect program. So Alibaba won't get a real decision until the end of May (at the earliest) or potentially even June. And I expect it to be a green light.

But even if it doesn't happen by this summer, it will happen eventually.

As China's largest company by market capitalization, Alibaba is a must-own for Chinese investors. That includes the country's pension funds, which are now allowed to invest in the stock market.

They simply can't afford to miss out on a big-name tech giant that's already returned an average of 20.2% per year over the last five years. It would be like being unable to invest your 401(k) in shares of Apple.

All this means is that we have even more time to cash in on Alibaba's eventual inclusion.

In a rational market, a situation like this would never exist... But thanks to one of the craziest anomalies in finance, we have a rare opportunity to buy the top Chinese companies at a massive discount. Learn more here: The Craziest Anomaly in Finance.

Things have been changing in China's markets for years. Thanks to a huge decision from Beijing, billions of dollars have started flowing into Chinese stocks. And investors all over the world are starting to pay attention... Get the full story here: This Changes Everything.

Market Notes
AN AMERICAN ICON STRUGGLING AGAINST THE TREND

Today’s chart shows another victim in the “death of retail”…

Regular readers know that while the “retail apocalypse” may be blown out of proportion, it’s still very real for the stores that can’t change with the times. As other businesses cope with e-commerce through flexibility, the laggards suffer. And today’s company is facing the consequences…

Macy’s (M) is a well-known icon of American malls. From its Macy’s Thanksgiving Day Parade to its Christmas commercials on television, it’s a company that brings up warm memories and nostalgia. But this department store has struggled to cope during the reign of online shopping. And its earnings show it… For 2019, Macy’s reported sales down 1.6% from 2018. And its adjusted earnings per share fell 30%, from $4.18 to $2.91 for the full year.

Despite making a brief comeback in 2018, M shares are still down 80% over the past five years. And they recently hit a new 52-week low. As Macy’s continues to struggle with online competitors… it’s clear this company’s problems aren’t over yet. 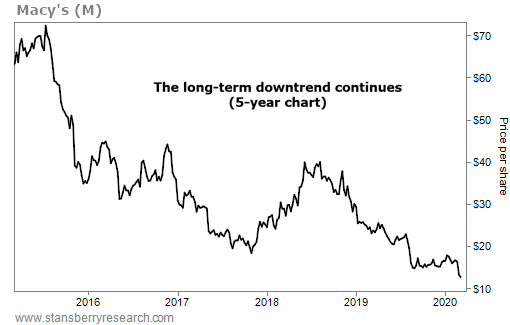