The Biggest Lesson I Learned While Earning a PhD in Finance
By Steve Sjuggerud
Tuesday, August 17, 2021

"If my professors are so smart, why aren't they rich?"

It's a question I asked myself over and over as I worked through school.

My undergraduate degree was in finance. Then I got an MBA. And I finished my PhD in finance while working as a broker.

It never made sense to me, considering how messy the world actually is... and seemed to me, even back then. Plus, I kept asking myself that question...

If things really were this simple, why were these folks teaching? Why weren't they out there getting rich themselves?

Today, I'll share the answer I learned along the way... and most important, how it shaped my investing.

To make it simple, my professors weren't getting rich because at the time, the "efficient markets theory" was all the rage...

The theory was that you can't predict future stock prices because all the information known about stocks today is already baked into the current price.

I understood what they meant when they said this. But I'd also been studying the history of finance. And I knew there were plenty of guys who were beating the market... year after year.

So I decided that if I wanted to make money in the markets, I needed to learn from the right people. Not my professors, who said it couldn't be done... but the guys who had actually done it and consistently succeeded.

What I found is that while many of the best traders use different strategies, there's something that unifies almost all of them. I got my first glimpse of it in 1990...

That's when I read Martin Zweig's book Winning on Wall Street. The book's subtitle is How to Spot Market Trends Early, Which Stocks to Pick, and When to Buy and Sell for Peak Profits and Minimum Risk.

He built many simple systems that either beat the market or (more typically) equaled the market's return – but with a lot lower risk.

Zweig wasn't the first to do this... But he found me at the right time. And I started building systems, too.

As longtime readers know, I have a mathematical mind. And the math that Zweig outlined made sense to me...

He showed that you could consistently outperform using plenty of different strategies... from buying cheap, to focusing on return on equity, to simply following the trend. The key was finding what worked for you... and sticking with it.

All I had to do was keep it simple... and keep it logical. The goal was to beat – or at least tie – the markets while taking a lot less risk.

Basically, what I found was that Zweig was right and my professors were wrong...

My professors said you couldn't beat the markets... that they were so efficient, nobody could generate above-average returns. But I've spent decades building an investment system that does just that.

Study any successful investor, and you'll find something similar... an investment system that helps them sort through mountains of information to make decisions. There are plenty of different ways the best investors do it. But in all cases, a system is in place, guiding them through.

Tomorrow, I'll share the simple investment system I use myself.

P.S. Anyone can beat the market... if they have a system in place and the ability to stick with it. For me, I built my best ideas into a computer system a decade ago. And I've used it to find some of my biggest winners since. I recently sat down to share the details of what I've been up to. You can get the full details here.

Making money in the markets doesn't have to be complicated. But it does require a particular mindset – you have to be bold when everyone else is fearful... Get the full story here: The Simple Moneymaking Investment Formula.

When too many investors rush in to one side of a trade, that trend is likely to reverse. And with folks piling into this "safe haven" asset today, following the crowd could mean missing out on major upside potential from here... Read more here: Don't Rush Into This Popular Bet Today.

Regular readers know that companies that sell “addictive” products like video games or fast food keep their customers coming back for more. Folks can’t get enough… And they’ll keep buying these products over and over, in good times or bad. Today’s company sells all the pizza anyone could want…

Papa John’s (PZZA) is a $5 billion pizza chain. It has more than 5,000 locations in 45 countries and territories worldwide. In addition, Papa John’s recently announced the limited return of its Shaq-a-Roni pizza – a fan-favorite partnered with former basketball player Shaquille O’Neal as part of a charity campaign… And that’s only one example of how this company harnesses the power of its customers’ cravings. Papa John’s recently posted its eighth consecutive quarter of growth, with total sales up 12% year over year.

As you can see, PZZA shares are in a strong uptrend. They’re up more than 200% over the past three years, including dividends, and recently hit a new all-time high. As folks keep turning to this company for their pizza fix, that trend should continue… 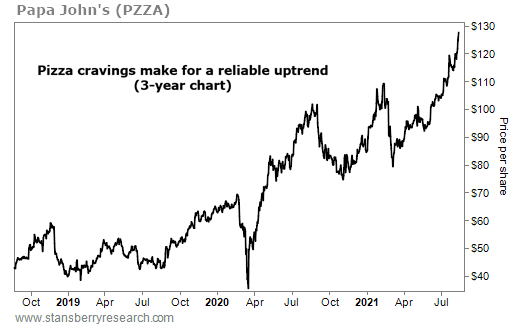