"One billion dollars? You call that a position?" legendary fund manager George Soros once asked his trading partner Stanley Druckenmiller.

Soros continued, "It takes courage to be a pig."

His point was, when your trades are working, you have to go for the jugular. At Soros' urging, Druckenmiller doubled that position to $2 billion. The trade went dramatically in their favor, and they made far more money.

George Soros may be better known today as a billionaire who funds a lot of political causes. But in the 1970s, he was the best investor on the planet... far better than even Warren Buffett.

How could Soros outperform the market so dramatically? Early on in my career, I wanted to figure that out. And today, I'll share what I learned... and how you can put it to work for yourself.

I graduated from the University of Florida in 1992. That same year, Druckenmiller recounted some of the lessons he learned from working with Soros in an interview (shared in Jack Schwager's book The New Market Wizards).

When asked what the most important thing he learned from Soros was, Druckenmiller replied...

It's not whether you're right or wrong that's important, but how much money you make when you're right and how much you lose when you're wrong. The few times that Soros has ever criticized me was when I was really right on a market and didn't maximize the opportunity.

It's hard to believe these words of wisdom are nearly 30 years old... because the lessons of Soros and Druckenmiller apply perfectly today.

I hope you can see the influence of this idea in my writing. Even though the stock market keeps pushing higher and higher, I have pushed you to keep taking advantage of the Melt Up.

"But Steve," you might say, "This trend is built on false foundations. I can't invest in that!"

You're right about the trend... But, yes, you can!

Economic history is a never-ending series of episodes based on falsehoods and lies, not truths. It represents the path to big money. The object is to recognize the trend whose premise is false, ride that trend, and step off before it is discredited.

This is exactly what we're trying to do here in the Melt Up.

Twentysomethings are trading tech stocks on their phones. They're buying cryptocurrencies. They're speculating – in a way I haven't seen since, well, the last U.S. Melt Up in 1999.

Is it some fundamental change to our economy that's driving them to buy already-expensive stocks? No. It's far simpler than that.

Animal spirits have kicked in among investors. "FOMO" – fear of missing out – is here. That's it.

These new folks getting into the market aren't interested in investing because they had a great idea, but because of the FOMO happening in the market today.

Simply put, we're reaching the point where the "Greater Fool Theory" kicks in... when the only reason someone buys a stock is because they think a greater fool will come along and pay them a higher price for their stock. It's not about the fundamentals of the economy or the business – it's sheer excitement.

Thinking of it this way makes it much easier to step off the Melt Up trend before it's discredited.

We're not living in a magical new time. This is a trend whose premise is false. But it still takes courage to be a pig in times like these.

My plan is to do just that... ride the current trend... and then step aside before it's discredited. I hope you'll do the same.

"U.S. stocks are darn expensive," Chris Igou writes. With valuations near record highs, you might think that getting out of stocks now is the right call. But history tells us that stocks have further to go before the end of this bull market... Read more here: What Near-Peak Valuations Mean for Stocks.

"It makes sense to be a little worried about the market today," Dr. David "Doc" Eifrig says. When investors are this euphoric and stocks keep hitting new record highs, it usually means we're due for a correction. But that doesn't mean the Melt Up is over... Get the full story here: The Bull Market Is Healthy... But Expect Volatility.

Market Notes
SHARES OF THIS WELL-KNOWN COSMETICS TITAN ARE SOARING

Today, we’re checking in on a powerful investment theme…

Regular readers know we’re always keeping an eye out for uptrends in well-known brands. Strong brands keep customers coming back, even if it means paying more for the products they love… or even if they can’t visit a store in person. Today’s company shows the steady appeal of big names…

Estée Lauder (EL) is a $105 billion global cosmetics giant. It boasts more than 25 prestige brands of makeup, skincare, fragrance, and hair-care products. While the COVID-19 pandemic has hit retail hard, Estée Lauder’s revenue rose 5% year over year in the most recent quarter. Estée Lauder’s president largely attributes this growth to the company’s hero products and brand messaging… Plus, the company’s virtual try-on and video-chat services are working to give loyal customers the ultimate online-shopping experience.

As you can see, EL has soared more than 90% from its mid-March lows. They’ve also recently hit a fresh all-time high. This is more proof that investing in powerful brands can lead to big gains… 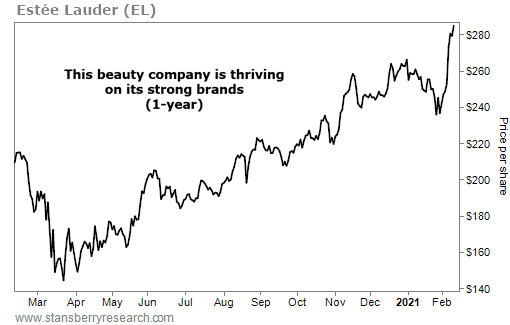