There's one sentence that I hear from investors that drives me crazy...

"If the stock can just get back to where it was trading, I'll make a lot of money."

Most investors are guilty of this kind of wishful thinking. We all look at a stock's price chart and take note of its 52-week high price. Then we calculate the gain if it could get back to that price.

Most of the time, the potential gain sounds attractive. And unfortunately, a lot of investors buy for this reason alone.

Over the past few months, I've heard a lot of folks say this about tech stocks: "If they rebound back to where they were trading in 2021, I'll more than double my money."

This kind of talk drives me crazy.

I'll put it plainly, as I've told many investors these past few months...

They ain't comin' back, folks.

That's especially true when it comes to two former pandemic winners. First, though, we need to look at why this line of thinking is flawed...

The idea that stocks are bound to go back to where they were relies on a psychological bias called "anchoring." Our brains hook on to numbers from the past – even if they're completely irrelevant – and anchor our expectations to those numbers.

For example, a price negotiation is shaped by the first amount someone proposes. Our last salary helps determine what employers will offer us at the next job. And past prices stick in our heads as some sort of fair value to measure things against.

But the markets don't work like that. Maybe a stock that's trading for $50 once traded for $100 – but that doesn't mean the stock will ever get back to $100.

A piece of advice... You need to forget where tech stocks were in November 2021. Get it out of your head. That number has no relevance to the world we live in today.

After all, valuation really does matter. It's not simple enough to say that this is a good company with a bright future, so it will trade at an absurd valuation again.

In 2000, Cisco Systems (CSCO) traded for $77. It fell more than 85% in the dot-com crash. And it took nearly two decades to get back just half of that previous share price. Take a look... 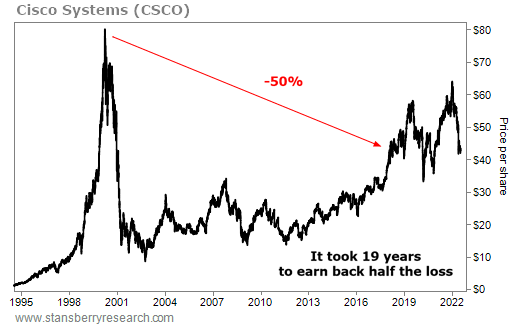 The problem wasn't that Cisco was a bad company. Unlike many short-term winners in the dot-com bubble, it had a real business with huge cash flows. But it traded for 60 times sales in 2000, and even a great business can't sustain that.

With at-home exercise becoming the norm during the pandemic, everyone had to have one of Peloton's stationary bikes and a subscription to its interactive classes. Demand soared.

Things got a little too good for Peloton, however.

It couldn't make bikes fast enough to keep up with demand. Shipments lagged. And there were plenty of complaints about quality. Plus, the company ousted its founding CEO, started laying off employees, discounted its bikes, and began looking for someone to buy it out.

Peloton is down nearly 95% from its 2021 highs. It's a big fall for a company that had convinced investors that it would go on to become the biggest name in global fitness... 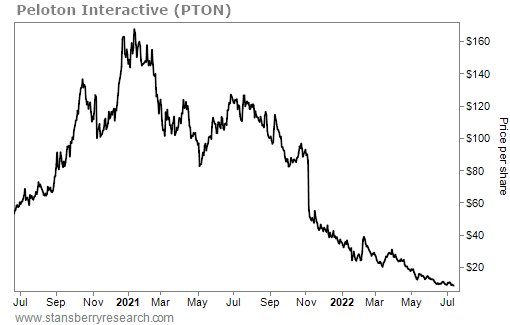 The real problem with Peloton was its valuation...

At one point, Peloton was valued at $48 billion based on about $3 billion in sales.

Stocks get their valuation from their future cash flows – not the present. So what kind of future was Peloton's $48 billion valuation implying?

First, we have to think of what Peloton would look like as a mature business, once it had stopped growing so fast and had reached a steady state of maybe 6% growth per year. A business like that would often be valued around 15 times earnings.

Peloton is not and was never profitable... but maybe someday it could be. Let's be generous and say it could earn a 30% profit margin.

Under these assumptions, for Peloton to grow into its $48 billion peak valuation, it would have to generate $16 billion in annual sales.

There simply aren't enough people willing and able to buy that many bikes and subscriptions... no matter how hot Peloton's brand is. Even amid the pandemic lockdowns, Peloton's sales only reached $4 billion in its 2021 fiscal year – a quarter of that volume.

So get it out of your head that Peloton will rebound back up to $160 a share like it was trading for at its peak. 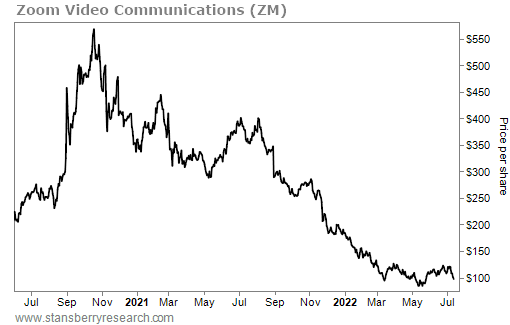 Like Cisco in 2000, Zoom's fundamentals are fine... It's profitable and growing. But at $160 billion, Zoom was considered almost as valuable as Nike (NKE) or Salesforce (CRM), trading for an unheard-of 120 times sales.

The story for Peloton and Zoom simply isn't coming back... And it's the same for a lot of these tech names. They may rise – just not back to extreme valuations. Investors aren't interested anymore in the big stories that sold them in 2021.

If you ever find yourself looking at one of these tech names and saying, "Well if it can just get back to its previous high..." please reread this article. Do not buy based on that hope.

Again, they ain't comin' back, folks.

Editor's note: The euphoria that drove tech stocks to absurd valuations is over. You might be focused on just trying to weather the storm today – but you can do more.

On Tuesday, July 19 at 10 a.m. Eastern time, Doc is coming forward with a solution to the pain so many of us are feeling as investors. He believes a series of events is unfolding that will completely change life in America... And it's already kicking off what he's calling the biggest financial opportunity of his career.

If you get positioned now, you could see incredible gains... in some of the most defensive, "bulletproof" stocks on the planet. Save your spot for this free online event here.

You can earn solid returns when you invest in great stocks that are trading at a discount. But knowing the difference between an underrated find and a value trap is the difference between making money and losing it... Read more here: How to Tell Whether a Stock Is a Turnaround or Is Headed for the Trash Heap.

"Investors are hoping they'll see a historic meme-stock rally repeat itself," Sean Michael Cummings writes. But while investing in fad stocks might be exciting, it's not a successful long-term strategy. And that makes this stock one to avoid today... Get the full story here.