An interest-rate cut from the Federal Reserve is all but certain.

That wasn't the case a few months back. But in a press conference last month, Fed Chairman Jerome Powell laid out the justification for lower rates.

He cited the slowing global economy and what he called the central bank's responsibility to get inflation back up to the Fed's 2% target.

This is a big change. The Fed was in the process of hiking rates to start the year. Now it's taking the opposite approach... setting the stage for an interest-rate cut.

This is a good thing for the market. Based on decades of data, it could mean a 24% rally over the next year.

Fed chairs are notoriously vague about their intentions. But Powell's June comments were clear enough to make a believer out of Jan Hatzius, chief economist at Goldman Sachs and possibly the best macro strategist on Wall Street.

For some time now, Hatzius has tended to be more hawkish (thinking rates were going up) about his Fed outlook. He was calling for rate hikes late last year when his competitors had already shifted to calls for a hold.

For much of this year, he has kept up his hawkish attitude, saying the Fed would remain on hold.

But following Powell's commentary, Hatzius dramatically changed his tune. He now says the Fed will likely cut rates by 0.25% in both July and September. (Fed members will be hitting the beaches in August.)

Hatzius' 180-degree turn is a big part of why market expectations for a cut have jumped. Fed funds futures are now saying the market sees a 93% chance of a rate cut at the July FOMC meeting. Futures traders also expect a 67% chance of a second rate cut at the September meeting.

And note, this is even after the stellar jobs report for June came out. A stronger economy typically means there's less chance of a rate cut – so Powell's words made a big impression.

So if you buy into Hatzius' view that at least one cut is coming, what does that mean?

Well, for that I'll turn to market strategist Tony Dwyer of Canaccord Genuity, one of my favorite strategists...

Given that we're not in a recession, we should be looking at some pretty hefty gains in the year ahead if the Fed does cut rates this month.

And remember, thanks to the Fed's change in tune, Dwyer and Hatzius both think that's a near-certainty.

The best thing to do today is to position yourself ahead of this looming interest-rate cut. You want to be long stocks now, before the Fed cuts rates and this historical precedent sets in.

Editor's note: Keeping tabs on Wall Street isn't always easy. That's why Scott and his team started Stansberry NewsWire – to cut through the noise of the mainstream media and show you what's really going on in the markets. You'll receive daily, actionable updates... along with research, commentary, and up-to-the-minute news. If you're ready to get an "information edge," sign up for free right here.

"We have a lot of history that says stocks are a smart bet over the next year," Steve writes. Another recent event shows that a wave of higher prices is likely... In fact, it has a perfect track record. Read more here: One More Reason the Melt Up Isn't Over Yet.

Nowadays, investors deal with a constant stream of information. You can use it to your advantage... But it can also be paralyzing. Learn more about how to navigate the markets in a fast-changing world right here.

Today, we’re looking at a leader in aerospace and defense…

The U.S. government spends a fortune every year on global conflicts – so much so, that we’ve noted defense contractors might as well be called “offense” contractors. And with a defense budget of $674 billion for 2019, these companies are going strong today…

Just look at Lockheed Martin (LMT). This $104 billion defense giant provides missiles, aircraft, and technological services to militaries across the globe. And it gets more money from the U.S. than any government contractor – period. All this military spending has fueled Lockheed’s sales… In the most recent quarter, Lockheed reported net sales of $14.3 billion, up 23% from the same quarter in 2018. And its “backlog” of orders reached $133.5 billion, a record for the company.

As you can see in today’s chart, shares of LMT are soaring this year. The stock is up more than 40% in 2019 alone, and it recently hit a new all-time high. As long as the U.S. continues to invest in its military, “offense” contractors like Lockheed should continue to succeed… 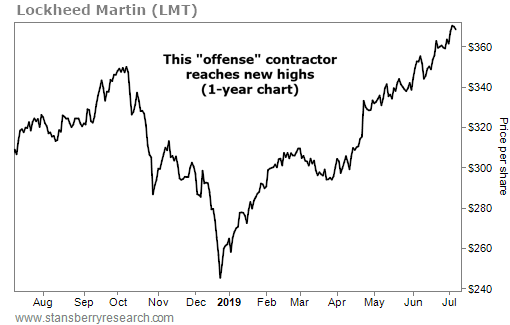