The Final Stage of the Melt Up Is Here
By Steve Sjuggerud
Friday, May 10, 2019

This is exactly how the final push of a Melt Up begins...

You see, Melt Ups are possible because of wild investor sentiment. We've seen it before. Folks go from scared to euphoric... And they buy stocks at any price, creating a massive surge higher.

That's precisely what has happened in 2019. Folks were scared to death at the end of last year. But prices bounced back... in a big way.

We want to be on board to ride this wave. It's our last chance to earn big profits – and pad our retirement accounts – before the Melt Down begins.

Let me quickly show you what has changed this year, and why it means the final stage of the Melt Up is here...

Crazy investor sentiment is always present in a Melt Up. That's what causes the wild crescendo before the eventual peak.

We need to see individual investors become "irrationally exuberant" (to borrow a phrase from former Federal Reserve Chairman Alan Greenspan). We need to see them go "all in."

That hasn't happened in recent years. But it's beginning to happen now...

One way to see it is the "dumb money" confidence gauge from my friend Jason Goepfert of SentimenTrader.

Jason tracks what everyday retail investors – the "dumb money" – think of the market. These folks tend to get it wrong at the worst possible times. When they are maximum bullish, it's a big sign that a crash is coming.

But these are also the folks we need to see buying to push prices to their eventual Melt Up peaks. And that's exactly what they're doing lately...

That's how the final phase of a Melt Up kicks off.

It's not just Mom and Pop buying today, though... Even professional investors have been rushing back into the market.

This is a monthly survey of hundreds of professional money managers. It asks them what they're doing with their money and what has them worried.

The April survey revealed that professional money managers are holding one of the lowest cash positions we've seen during this bull market. They're pushing money into the markets, betting on higher prices.

Again, that's what has to happen for this Melt Up to build to a final peak.

Both Mom and Pop and the pros are forcing money into the markets. That's a big deal, even with trade war fears slowing things down this week. It says more upside is likely ahead.

This makes me incredibly bullish over the next few months. We recently saw new all-time highs... And we have the general investment community getting bullish once again.

That's a scary combination – over the long term. But it should be extremely profitable in the short term. It means the final stages of the Melt Up are here. And we need to act NOW to take advantage of it.

So please, if you're not on board, this is your moment. You really want to own stocks right now, during this final window of opportunity. Then, you want to get OUT when the Melt Down begins.

I believe we have six to 12 months to profit before that happens. So get on it now... Don't miss out.

P.S. My friend, you need to use this window of opportunity to profit... and to prepare.

If you're worried about how to make it through the next crash, tune in on Wednesday, May 15 for the Bear Market Survival Event. My friend and colleague Porter Stansberry is teaming up with legendary investor Jim Rogers to cover everything you need to know.

You'll learn how to tell when the peak is coming... the simple tools you can use to protect your retirement... and even the name and ticker symbol of a stock that could skyrocket in a downturn.

It's completely free to attend. You can find more details here.

"The time to act is here," Steve says. "If you don't get moving NOW, you risk missing out entirely." You might think you've missed your chance in stocks – but history says this bull market has more upside ahead... Learn more here: Our Last Window of Opportunity to Buy Stocks.

The same market forces that have propelled stocks to new heights will ultimately lead to the Melt Down. Recently, Mike DiBiase laid out the details on one factor that's driving us closer to the peak... Check out his two-part series here and here.

Market Notes
THIS 'BORING' MEAT BUSINESS IS A LONG-TERM WINNER

Tyson Foods (TSN) is one of the world’s largest food companies. This 84-year-old, $28 billion business is known for staples like Jimmy Dean sausages, Tyson chicken nuggets, and Ball Park hot dogs. Stocking our fridges is a reliable business… Tyson’s profits have kept rising each year for the past five years. And as the company plans to snag more customers with a line of plant-based meat substitutes this year, that growth should continue.

Long-term investors have done well with Tyson. While its share price has seen peaks and valleys, the stock has roughly doubled over the past five years… And as you can see, it’s hitting new 52-week highs. Tyson’s products may not be exciting, but its profits are anything but boring… 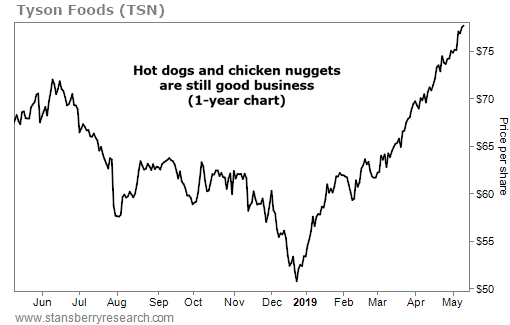