Steve's note: Cryptocurrencies like bitcoin are changing a lot of things. So I want to make sure you hear the most important details from my colleague, Eric Wade. He's our in-house crypto guru. And today, he's sharing one force that's moving cryptos beyond the world of speculation...

It would have been the biggest bank in human history...

In May 2019, Facebook executive David Marcus secretly gathered some of the social media company's brightest minds together.

He told them not to share what they were talking about. Then, he hoisted a glass of champagne in the air and said, "We're going to change the world."

Facebook was secretly developing a bitcoin competitor... a "supercurrency" backed by a basket of currencies from around the world.

It was called Libra. And after Facebook rolled it out to its more than 2.2 billion monthly active users... it would transform the company from a social media platform into a banking giant almost overnight. At least, that was the plan.

What Facebook didn't plan on was spooked regulators. They pounced on Facebook right after the company formally announced the project on June 18, 2019. Soon, Libra was buried. But that wasn't the end of it.

You see, instead of building supercurrencies, today's blockchain innovators are building stablecoins. (That's what Diem aspires to be.) They represent individual fiat currencies – something regulators are more comfortable with.

Stablecoins have grown dramatically as a result. They regularly generate more transaction volumes than PayPal does over three months. And this is one more reason why cryptocurrency is on the verge of mainstream acceptance...

There are two main types of stablecoins: centralized and decentralized.

Centralized stablecoins are issued by a single company or organization. These companies set aside a bank account for U.S. dollars. Investors can deposit real dollars into those bank accounts and get stablecoins back. That's how USDC works.

USDC is issued by Boston-based payments company Circle, and it has become one of the top 15 most popular cryptos in the world. There are more than $6.5 billion of USDC in circulation and trading volumes regularly exceed $2.5 billion a day.

First, they have no borders. You can send a stablecoin across town or around the world almost instantly and with very little fees. Stablecoin transactions also "clear," or are 100% finalized, within seconds. Compare that with the traditional banking system, which shuts down on nights, weekends, and holidays.

Since they're cryptos, stablecoins are also programmable. Developers are using that feature to spawn an entirely new banking system called decentralized finance ("DeFi").

DeFi uses "smart contracts" to do all of the things that banks can do – like issuing loans, interest accounts, and even bonds and derivatives. You see, smart contracts are computer programs that run automatically on blockchains. So even people who don't have bank accounts can get involved... All you need is a mobile phone and crypto.

In short, stablecoins have become a gateway into the crypto world. And they're in high demand.

The popularity of stablecoins can be paradoxical for some blockchain investors... They're often pegged to assets that lose purchasing power over time (such as fiat currencies).

But stablecoins have a number of different uses:

In other words, stablecoins have very specific use cases, and they can help investors who are looking to avoid the volatility of speculative coins and tokens.

We'll continue to see innovation throughout this industry. Regulation will increase... not to stamp out stablecoins, but to legitimize them. And as stablecoins continue to put this idea on the map, it will be one more wave pushing cryptocurrency toward mass adoption.

Editor's note: Eric recently sat down (virtually) with our Director of Research Austin Root to share the shocking story that led to his crypto-investing secret. It's a strategy that has helped a small group of subscribers achieve gains as high as 1,000% or more... And for a short time, he's explaining it in a free, easy-to-understand demonstration. Watch it right here.

"You never, ever fight the macro trend," Eric says. One of the biggest macro trends in decades is playing out in front of us right now. And it could change life as we know it, whether we like it or not... Get the full story here: The Biggest Macro Trend in the Markets Today.

"Crypto moves faster than any new technology I've seen in more than three decades of professional investing," Eric writes. For two key reasons, it's only picking up speed to continue revolutionizing the world. And that could lead to major gains in the near future... Read more here: 'Idea Darwinism' and Survival of the Fittest.

Today, we’re looking at a company that’s performing well during this ongoing pandemic…

With the COVID-19 pandemic forcing people to stay at home, many folks have spent more time with their pets. The pandemic has also led many to bring new companions into their lives… And shelters, rescues, and breeders across the country have reported increased demand. Today’s company is benefiting from this trend…

Freshpet (FRPT) sells healthy pet food. It uses all-natural ingredients and cooks the food in small batches at low temperatures in order to preserve the natural flavors. As folks look to spoil their companions while they’re stuck at home, they’re loading up on Freshpet’s high-quality options… The company reported third-quarter net sales of $84.2 million, a 29% year-over-year increase. It also got a powerful boost from its e-commerce segment, as online sales exploded 188% compared with last year.

As you can see, FRPT shares are soaring. They’re up nearly 280% from last year’s mid-March low… And they just hit a fresh all-time high. As more people buy healthy food for their pets, this trend should continue… 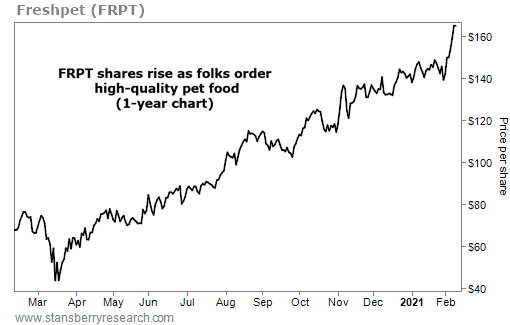