"Son, I have followed you into every investment you have ever recommended," my dad told me in 2003. "But I draw the line at your latest story on gold and gold coins."

When my dad said this to me, two things immediately went through my mind...

Why did my dad hate gold so much back then?

Why did he draw the line at following my gold recommendations? And can we learn something from his experience today?

Today, I'll share the details with you. And they'll show that right now is a fantastic time to own gold.

My dad's personal experience with gold was a lot different than what we've seen since 2003. He had the opposite experience. And he felt burned by gold, big time.

It turns out, my dad owned some gold coins... South African krugerrands, to be specific – which have roughly one ounce of gold in them. After booming during the 1970s, gold peaked at $850 an ounce in January 1980. Assuming my dad paid $700 an ounce, that would mean he lost half his money between when he bought and my True Wealth issue in 2003 – as gold went from $700 to $350.

Last month, I inherited those gold coins from my father. (He passed away in 2008. And my mother passed away recently of pancreatic cancer.) Holding those coins in my hands brought back these memories.

Is there a lesson here for us today? Actually, yes...

The same conditions that set up the 1970s gold boom are in place today. But gold hasn't soared – yet.

What caused it to soar?

In the simplest terms... It was a loss of faith in government.

The oil crisis in 1973 kicked off a dreary decade for the economy. Inflation took hold, rising at rates the U.S. had never seen. And unemployment started rising, peaking at nearly 11% in the early 1980s – the highest rate in our lifetimes (until this year).

And the government started running extreme budget deficits – spending far more than it took in – to try to stimulate the economy. The budget deficit reached 6% of gross domestic product by 1983.

Here's the thing... the numbers from the '70s and '80s pale in comparison to today's numbers. This is what we're seeing now...

So how will our government pay for this?

And you probably know what else this means... We'll see much higher gold prices.

It's an old, old story for most investors. Printing more money reduces the value of the dollar over time – which makes gold a better store of value.

This is certainly true today. And the conditions are in place to put this trend into hyperdrive.

My dad didn't listen to me when I told a similar story in 2003. And it's no surprise given his personal experience. But if you feel the same – if you don't like the idea of owning gold today – please hear me out...

Conditions are set up for a multiyear rally in gold prices. Don't allow yourself to miss it.

"To help stabilize the economy during this coronavirus crisis, some folks expect the Fed will print a total of more than $10 trillion," Drew McConnell writes. And as this artificial extra money devalues the dollar, one asset is likely to soar even higher... Get the full story right here.

Even though stocks have come roaring back after their dip earlier this year, some still expect a deep recession over the next year. That's why it makes sense to makes sure your portfolio is protected against whatever comes next... Read more here: Get Ready for the Next Great Bull Market in Gold.

Market Notes
MILITARY SPENDING IS STILL AS HIGH AS EVER

We’ve noted for years that the U.S. maintains a military presence around the world, even if it costs a fortune. Recently, the House of Representatives passed a $740 billion defense spending bill. And that’s a tailwind for businesses that sell gear, equipment, and services to the military. Today’s company is a perfect example…

Booz Allen Hamilton (BAH) is a $12 billion defense contractor. It provides IT services and cybersecurity solutions. The military makes up nearly all of its revenue. And it just reported a strong quarter. Both earnings and revenue topped estimates… And the company’s backlog, which measures agreements for services not yet reported as sales, grew 15.9% in the quarter to $23 billion. CEO Horacio Rozanski called the quarter an “excellent start” to the company’s fiscal year.

As today’s chart shows, BAH shares have surged higher. Since bottoming in March, the stock is up more than 50%, and it just hit a fresh all-time high. As long as the military still relies on Booz Allen, this stock should continue higher… 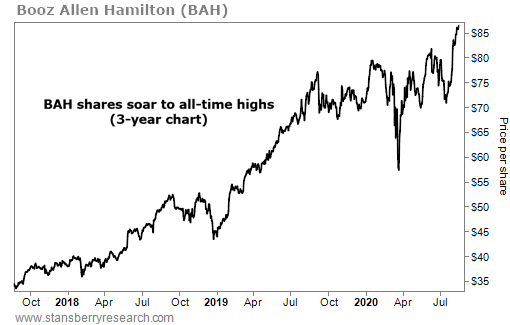