The Surprising Big Winner From the Last Melt Up
By Steve Sjuggerud
Monday, October 29, 2018

Today, we remember that Melt Up as the "dot-com boom" or the "tech bubble."

Investors believed we were entering a new era. The Internet was going to transform our lives. Soon, everyone bought into the mania. Everyone insisted, "This time is different"...

On the back of this belief, the tech-heavy Nasdaq Composite Index soared more than 200% in the final 18 months of the tech bubble.

Another sector performed much better. I believe it will once again prove to be one of the biggest winners in today's Melt Up.

Stocks have historically delivered about 10% a year over the long run. So a 200%-plus gain in just a year and a half is a massive outlier.

That's why I call that time the last great Melt Up in stocks. The Melt Up is the period of massive stock market gains that comes right before a huge "Melt Down" crash.

That crazy Nasdaq boom is why the world remembers the last Melt Up as the "tech bubble."

It turned every Joe Shmoe with an online broker into a day trader. And it minted countless millionaires. But few folks understand what really happened behind the scenes...

They have no idea that tech stocks were not the biggest winner during the last Melt Up.

The biggest winner was the biotech sector.

The biotech sector is made up of the major drug developers and research companies. They're the ones that work on the next big medical breakthroughs. New drugs and treatments don't always get approved... So these companies carry a lot of uncertainty. And they go through major booms and busts.

When biotech booms, it really booms. And that's exactly what happened during the last Melt Up. The final score wasn't even close. Take a look... 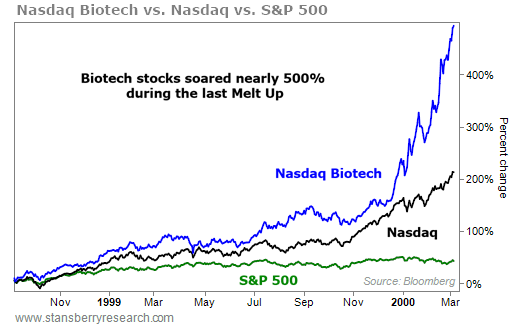 The Nasdaq soared 215% in the final 18 months of the tech-stock boom. It greatly outperformed the overall stock market as measured by the S&P 500.

However, the Nasdaq Biotechnology Index soared an astounding 494% in those same 18 months.

I'm not talking about one lucky micro-cap winner. I'm talking about the entire biotech sector. That's 494% in an entire index of stocks.

Biotech stocks returned roughly 10 times more than the overall market... And they returned more than double the Nasdaq.

If you've read my work recently, you know I believe we're in the midst of another great Melt Up. Markets have been volatile lately, but I still expect a blow-off top before we reach the eventual peak.

This one could lead to triple-digit gains in the Nasdaq once again... But here's what will surprise most folks: Biotech stocks will likely be the surprise big winner once again.

If you want to see the biggest profits in the current market, biotech stocks are one corner of the market you've got to own in the coming months.

P.S. Last week, I shared the latest details of my Melt Up thesis at a blockbuster event... and introduced a brand-new portfolio of nine recommendations built to capitalize on the boom. That includes two biotech opportunities that could both soar several hundred percent as the Melt Up unfolds. To learn how to access these recommendations, click here.

Recently, Brett Eversole highlighted another group of stocks that could leap higher in the coming months... Learn more here: This Corner of the Market Could Boom, Thanks to the Recent Bust.

We can look back at the last Melt Up for lessons on what to expect today... See what history suggests about the recent volatility in the markets right here.