If you and your friend have been accused of a crime, the most rational thing for you to do is betray your friend.

It sounds harsh, but you want the best possible outcome for yourself, right? Anything else would mean you're irrational. (And I know you're not irrational.) So you choose to rat him out.

This situation is known as the "Prisoner's Dilemma," one of the most well-known concepts in game theory.

Recently, a real-world example of this struggle came to a dramatic conclusion. And it's done investors and traders a huge favor... because it means now is an excellent time to use a little-known trading strategy with a 95% win rate.

But before I get to that, let's walk through this concept in more detail...

Here's an example of the Prisoner's Dilemma you might see in business.

Let's say there are two companies that make furniture – Tom's Furniture and Jim's Furniture. These are the two biggest furniture makers in the region, controlling the majority of the market. Both companies produce similar-quality products.

For years, Tom and Jim have priced their furniture the same. But both companies are always faced with a decision about whether or not to change their prices.

Tom wants what's best for his company. He wants his employees to be paid well and he wants a second home in Hawaii. So he wants the company to maximize profits.

In order to increase sales, Tom could cut his prices and steal customers away from Jim. Since both products are of similar quality, the customers would go with whatever is cheaper.

Tom could also decide to stick to the status quo and not change his prices. Both companies would keep their market share. And things would remain the same.

But Tom also has to consider what Jim will do... What if Jim were to cut his prices, while Tom did nothing? In that case, Tom would lose a good chunk of his customers and his profits. That might put him out of business.

Below, I'll show you a payoff matrix for Tom and Jim. The first number in each cell is going to be the payoff – or incremental profits in millions of dollars – for Tom's Furniture. The second number in each cell is the payoff for Jim's Furniture. For example, in the top right cell, "0, 75" means that Tom's profits would remain unchanged, while Jim's profits would increase by $75 million.

When you look at this table, it's clear the best outcome for both companies is to keep prices the same. Tom's and Jim's profits would both increase by $50 million because of normal growth in the industry. But here's where game theory kicks in...

Tom can look at this payoff matrix and think to himself, "I can increase my profits by $75 million if I catch Jim off-guard and cut my prices. I'll take his customers and Jim will be in a world of trouble."

Tom also thinks that if he does nothing and Jim cuts his prices, then Tom could lose his customers and his profits won't rise. Because Tom is a rational person, he wants the maximum benefit for himself. That means he's going to cut his prices.

It just so happens that Jim is also a rational person. And he's in the same situation as Tom. He decides to cut prices, too.

As you can see, after they both cut prices, their profits only increase $25 million per company. They would have made more money by simply doing nothing!

Sometimes this back-and-forth gets so bad that companies start price wars – when businesses constantly lower prices to get an edge over their competition. And while nothing good typically comes from wars... price wars can lead to big-time benefits for consumers.

One price war has recently ended, which is great news for investors and traders. I'm talking about the pricing war between the big online brokers.

For a long time, many online brokers had similar commission structures. Most of them charged about $4.95 to $6.95 as a base trading fee. Customers just accepted that price and had no choice but to pay it. They didn't have many alternatives.

But that has changed. A couple of months ago, market leader Charles Schwab announced that it would eliminate commissions for U.S. stocks, exchange-traded funds, and options. And it didn't take long for the other brokers to follow suit. TD Ameritrade and E-Trade Financial cut their fees next. And finally, Fidelity Investments did the same.

This all started with the emergence of Robinhood, a commission-free investment and stock-trading app. As Robinhood started gaining more users (it has grown its user base to more than 10 million accounts since its founding in 2013), I knew the entire industry would have to cut fees to keep up. And that would be a huge win for investors and traders.

You see, I run two option-trading services – Retirement Trader and Advanced Options. Both have been wildly successful. Retirement Trader has amassed an incredible track record. We've closed 488 trades since we launched in 2010, and 464 of them have been winners... a winning percentage of 95%.

And although Advanced Options doesn't have the lengthy track record Retirement Trader does (since it was launched late last year), I'm happy with the early results. We've closed 22 trades in total, and 15 have been winners. And the average return out of all those trades – winners and losers – has been 27% with an average holding time of just 37 days.

Our option services have been successful, but commissions have always been a pain for our subscribers... especially for folks who don't have big portfolios or who only trade one or two contracts at a time. With fewer contracts traded, commissions – particularly the extra commissions often associated with options – eat into profits and take away from their total returns.

But now that the major online brokers have eliminated commissions, my subscribers get to keep almost all of that profit. (Some brokers, like TD Ameritrade for instance, will still charge a small $0.65 per contract fee.)

This is a huge win for the everyday investor and trader. If high fees have ever stopped you from opening a brokerage account, now is the time to start trading.

Editor's note: Just recently, Doc demonstrated a live trade that put $1,000 in the pocket of a retired New York City police chief – in a matter of minutes. This simple strategy can help you generate thousands in extra income every month... And as you've seen today, now is a fantastic time to get started. To learn how it works, click here.

"After you make this trade," Doc says, "you sit back, relax, let time do its work, and check back in a couple weeks." Thanks to a phenomenon in options trading, Doc is able to identify some of the most profitable trading strategies you'll ever find... Read more here.

"Cognitive psychologists have named the way we learn 'chunking,'" Doc writes. By breaking up complex ideas into more simplistic parts, your brain is able to automate difficult thought processes. And even though options can seem difficult or confusing, learning how to use them is no different. Learn more here.

Market Notes
SELLING AIR CONDITIONERS IS BORING... BUT IT WORKS

By boring, we mean businesses that have been doing the same thing for decades – and do it darn well. They may not be exciting… But they can help you take advantage of steady, stable growth, with less risk of a big crash. We’ve seen this with food distribution, paint, and trash collection. Today, we’re looking at another great example…

Ingersoll Rand (IR) sells, installs, and maintains heating, ventilation, and air conditioning (“HVAC”) equipment. IR makes money when customers buy an HVAC system… when they need to maintain it… and when they replace it after 10 or 20 years. That’s hardly thrilling, but in the most recent quarter, IR hit net sales of $4.3 billion – up 8% year over year.

Doc recommended Ingersoll Rand to his Retirement Millionaire subscribers in April 2018. Since then, IR has risen to new all-time highs – and readers who took Doc’s advice are up about 60%, including dividends. That’s why a good “boring” business always belongs in your portfolio… 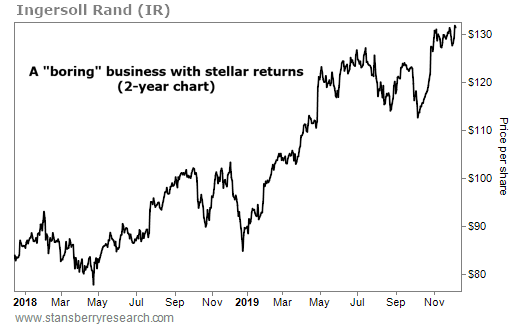