This Currency's Rally Is About to End
By Brett Eversole
Thursday, January 19, 2023

The most important financial shift at the end of 2022 had nothing to do with stocks or bonds...

It was the change in the trend of the U.S. dollar.

The dollar had been soaring for most of 2022... Then, it peaked in late September and fell nearly 10% to end the year.

The rise and fall of the dollar affects just about every financial asset. Most of all, though, it means big changes for other global currencies. And that's exactly what we've been seeing.

When the dollar was soaring, global currencies were crashing. Now, they're on the rise again. But one major currency might be near the end of its rally.

Investors have already gone all-in on it. And history shows a slowdown – or even a reversal – is likely as a result.

The dollar is still the king of currencies. It's the global reserve currency and the most important for worldwide trade. But it isn't the only currency that matters...

The clear No. 2 on the list is the euro. It bottomed in late September, just as the dollar peaked. And the euro has jumped 13% since then.

Those kinds of moves don't happen often. Major currencies like the dollar and euro generally move at a glacial pace. No one would bat an eye over a 13% move over a couple of years... But to see it in a couple of months is rare.

Traders have taken notice, too. They see the euro soaring, and they're jumping on the bandwagon. Unfortunately, the euro might be too loved to keep moving higher.

We can see that by looking at the Commitment of Traders ("COT") report for the euro. This weekly report shows what futures traders are doing with their money. And when these folks get overly bullish, the smart move for contrarians like us is to take the opposite bet.

That's the setup in the euro right now. Take a look... 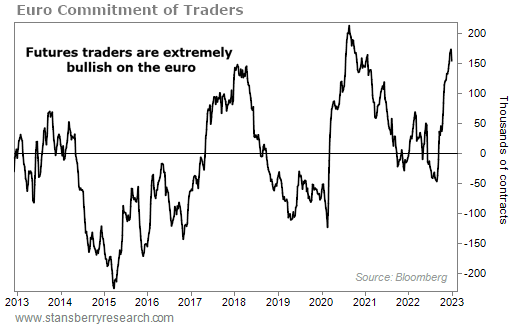 A multiyear high like this means that futures traders are all betting that the euro will rally. The problem is, when they all crowd in on a trade, their timing is terrible... They tend to pile into an asset after it soars.

That's why these big sentiment peaks often happen shortly before major declines. We've seen three similar setups in the euro over the past decade...

The most recent was in late 2020. The COT spiked to an all-time high as the euro surged. The currency managed to rally for a few more months after that. But then, it began a nearly two-year-long downturn, dropping more than 20% along the way.

A similar tale played out in 2018. The euro had been rallying, and the COT hit a new high. That kicked off a two-year slump for the currency – a decline of around 15%.

Finally, we'll look at the sentiment peak in 2013. It was the same story, with futures traders chasing performance. The euro rallied for a few months after the COT hit a high. But then the currency plummeted roughly 25% over the next year.

Today, we're setting up for another reversal. The euro crashed for most of 2022. But its double-digit rise in recent months has caught the eye of futures traders. And they have gotten extremely bullish as a result.

History shows the currency could rally for a while longer... But it also shows most of the gains have likely already happened. And there's a good chance the euro will be lower in a year than it is today.

The euro is due for a slowdown, but the rally in global stock markets is still going strong. If the dollar continues to fall – and if the rate of U.S. inflation keeps declining – look for opportunities in these parts of the world... Read more here.

"Gold blew its big shot at an inflation rally," Brett writes. Now, though, the metal is soaring. And history suggests it could see more outperformance ahead... Learn more here: 2023 Could Finally Be Gold's Year.