This Iconic Department-Store Chain Is on the Ropes
By Joel Litman
Wednesday, November 3, 2021

With Black Friday less than a month away, this year's holiday shopping season is upon us – with a few caveats.

We've already seen backlogs at ports around the country. Massive shipping containers can wait in line for weeks just to deliver their cargo. And these problems are likely to get worse.

However, anyone solely focused on these disruptions may be missing another important story of this year's holiday shopping season... the brewing battle between Macy's (M) and online-shopping giant Amazon (AMZN).

Let's take a look at what's going on and what it means for Macy's...

The demise of the department store is a long-running theme in the economy. Macy's is under pressure from off-price retailers like TJX's TJ Maxx and online titans like Amazon.

Yet the latest battle between the longtime retailer and Amazon is not for the consumer's wallet... but rather, for a symbolic piece of advertising space.

Macy's flagship Herald Square location in New York City is the largest department store in the U.S. And right across the street is a famous Macy's billboard.

For 60 years, the billboard's owner Kaufman Realty has rented the location out to Macy's. The retailer uses it as a backdrop for its most famous store and its renowned Thanksgiving Day Parade.

Now, Amazon is trying to move in and plaster its "smile" logo right over the red Macy's star, signifying its victory in transforming how and where people shop.

But Macy's is having none of it. It's taking Amazon to court and fighting tooth and nail to highlight how the billboard takeover damages its brand.

Despite the effort, the largest U.S. department-store chain is still on the ropes...

It's understandable that Macy's would be so sensitive over this direct attack, not only on its brand, but also on the crown jewel of its ailing department-store empire.

After all, the value of the Herald Square real estate alone has been tagged at $3 billion to $4 billion... roughly 25% to 30% of Macy's total enterprise value of $12 billion.

But Macy's has yet another reason to worry about Amazon stepping directly on its turf.

We can see this with a quick look at The Altimeter – a tool we offer at Altimetry. It shows users easily digestible grades to rank stocks based on their real financials, rather than the distorted metrics used on Wall Street.

The Altimeter tells us that Macy's last fiscal year was a tough one... Uniform return on assets ("ROA") fell slightly negative during the pandemic as fewer folks went out to shop in person.

While that's better than the distorted as-reported metrics suggest, it is still a poor performance compared with companies that benefited from a surge in online shopping during the height of the pandemic.

For Macy's to avoid being left in the dust, the company needs to see its Uniform ROA rebound this holiday season. Thankfully for management, Wall Street analysts expect that it will.

However, the estimates say that Uniform ROA should rise to a meager 7%... only slightly higher than the average cost of capital in the U.S. Take a look... 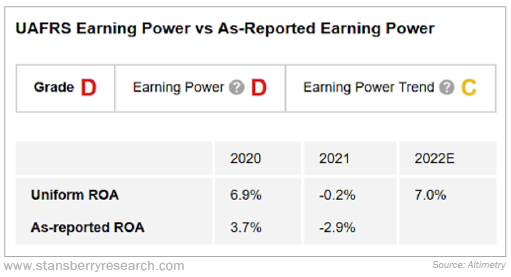 With earnings per share oscillating from positive to negative in recent years, Macy's still earns a "C" grade from The Altimeter for Earning Power Trend.

All of this spells trouble for this historic department-store chain...

If Amazon truly disrupts Macy's business, the company's Uniform ROA could dip below the average cost of capital, giving investors and management reason to worry about the future of the business.

And if profitability falls further, it could turn Macy's current "D" grade for overall performance into a worst-in-class "F" grade in the not-so-distant future.

Does this mean Macy's is a good short?

Likely no. The market is already well aware of the structural problems wreaking havoc on Macy's old-economy business.

But with its legal battles, changing consumer behavior, and the overall competitive environment, profits and earnings growth may fall even further. And Macy's had weak profitability to begin with.

This could create serious problems for the company. So, while Macy's is willing to ramp up its war with Amazon as the holidays approach... it's a stock you should avoid right now.

Editor's note: For the next few days, Joel is making an extremely generous offer to his Hidden Alpha readers... But we've convinced him to open the offer to DailyWealth readers, too. (You'll get access to The Altimeter's "stock grades," plus the research that has led to seven 100%-plus winners so far.) Learn how to claim $2,238 worth of bonuses – for a tiny fraction of the typical subscription price – right here.

With social-distancing restrictions easing, folks have been expecting a sharp recovery for casino operators. But Joel's model shows that one casino business is unlikely to become a "survive and thrive" story... Read more here: The World Reopening Won't Be Enough for This Casino Operator to Recover.

"There is tremendous value in understanding a company's true financial status," Joel writes. But financial statements aren't always transparent about performance metrics – and can even be misleading. That's why he created a way to discover a stock's true value... Learn more here: This Secret Could Have Made You 15 Times Your Money.

Market Notes
THIS PROVIDER OF CRITICAL HVAC SYSTEMS IS THRIVING

Today’s company is another “boring” winner…

Regular readers know that “boring” businesses can provide reliable returns. They’re not the stocks your friends will brag about at cocktail parties… But they do often reward shareholders with solid gains. Today’s company is a great example…

Comfort Systems USA (FIX) is a leading provider of mechanical, electrical, and plumbing (“MEP”) systems. It installs MEP and HVAC systems in non-residential buildings and maintains and upgrades them as needed. This “boring” strategy is paying off… In the latest quarter, sales rose 17% year over year from $714 million to $834 million. Meanwhile, the company’s backlog only fell slightly during the pandemic… And it recently hit $1.94 billion, up 19% on a same-store basis from the third quarter last year.

As you can see, shares of FIX are in an uptrend. They have doubled over the past year, including dividends – and they recently hit a fresh all-time high. And as companies rely on HVAC and MEP services, this trend should continue… 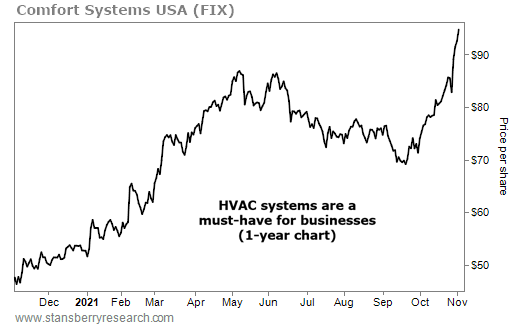