This Secret Could Have Made You 15 Times Your Money
By Joel Litman
Thursday, September 19, 2019

Steve's note: You've probably seen this Boston professor on CNBC... or read his work in the Harvard Business Review, Barron's, and Forbes. His name is Joel Litman. And now, we've partnered with him and his investment-services company to show you something amazing. If you've ever wondered how to really know when the financials are flashing "BUY," don't miss today's essay...

When I first started looking into universities and careers, my mother advised me simply...

Go into accounting. Learn the language of business. Then no one can pull the wool over your eyes.

I had no idea how prescient that advice would be. But eventually, over a career that has lasted more than 25 years, I found out just how right she was.

I discovered that reported financial statements and Wall Street research cannot be trusted. Worse, most of the investment world does not recognize this at all.

But this widespread problem doesn't have to threaten your investing portfolio. In fact, you can use it to your advantage...

Today, I'll show you a better way to understand and value your investments. I'll even show you how it could help you make multiple times your money... right under the noses of Wall Street experts.

There is tremendous value in understanding a company's true financial status.

Unfortunately, performance metrics like the price-to-earnings (P/E) ratio and discounted cash flow are terribly distorted and, in some cases, totally useless.

How could this be?

Without getting too technical, the problem lies with the standards of as-reported financial statements... specifically under GAAP ("Generally Accepted Accounting Principles") and IFRS ("International Financial Reporting Standards").

For instance, a firm may report increased earnings when, in fact, its performance has faltered. P/E ratios may show stocks are expensive when they're actually cheap. Margins, assets, capital expenditures, debts, and virtually all key financial performance indicators can be a far cry from an accurate representation of corporate activity.

A simple example is the FIFO/LIFO accounting policy that management teams choose for reporting cost of goods sold and inventory levels...

It is perfectly acceptable for one company to use the LIFO (or Last-In-First-Out) method for reporting cost of goods sold. The company just assumes that the last goods added to inventory are the first ones to be sold. Meanwhile, a peer company could choose the FIFO (or First-In-First-Out) method... the reverse.

Both companies have chosen a perfectly legal and acceptable accounting method under GAAP. However, each of these firms now has incomparable profits, costs, and balance sheets. Many other key financial performance indicators will also fall victim to this simple change.

And that's just one example. My team and I have identified more than 130 similar inconsistencies that can crop up in financial results.

Believe it or not, this isn't about lying CEOs trying to "massage" their earnings. The problem is institutionalized...

The financial-reporting authorities have established a set of standards that have been argued, debated, and then cemented over decades and decades. Unfortunately, the result is a set of inconsistent accounting rules that reflect a mixture of different goals.

All this probably sounds daunting. If most financial statements are wildly inaccurate, how can everyday investors know anything?

You should be asking yourself a different question: How can you use this to your advantage?

These accounting problems mean valuing a company based on the available information can be misleading. In other words, Wall Street is getting it wrong!

In order to see the true picture, my team and I have come up with a solution. We comb through the financial statements of more than 8,000 publicly traded companies around the world. We take them apart... and then put them back together using globally consistent standards that repair these problems.

As an example, let's look at streaming company Netflix (NFLX). Below, you'll see the publicly reported "return on assets"... in other words, the cash return that Netflix makes based on each dollar it invests into its business.

This is what the world believes to be true about Netflix.

According to the reported numbers, even in the early years, Netflix's return on assets was only about 1.8%. Not very impressive.

The real picture, though, is much different. We took another look at this company using our method (which we call "Uniform Accounting").

The blue bars are our adjusted and REAL return on assets for Netflix, dating back to 2003. Take a look...

Return on assets was 36 TIMES higher in some cases. We arrived at these numbers by deconstructing and then rebuilding Netflix's entire balance sheet... correcting all the built-in mistakes.

You could have bought the stock based on just this information as late as 2013, and still made 15 times your money.

Even as of last year, there's still a major discrepancy in the reported return on assets. It's almost nine times higher than what the public believes to be true.

This is the power of our Uniform Accounting metrics. We can sift through the results looking for great companies that are widely mispriced... and find chances to make multiple times our money.

These discrepancies are all over the stock market. All you have to do is look for them.

Editor's note: Next week, Joel is going on-camera to walk you through this amazing breakthrough. Tune in for free online, and learn how to expose the stocks that could double or even triple your money – before most of the investing world has any idea. It's all happening next Wednesday, September 25 at 8 p.m., Eastern time... Get the details here.

"If investing were easy, everybody would be rich," Dr. David Eifrig writes. "It's tough to gain an edge on the market when it's made up of some of the smartest financial minds in the world." But you can make investing easier by avoiding three common traps... Learn more here.

"If you can follow this simple rule, you'll have a great chance of outperforming the markets," Chris Igou writes. Get the details on this important lesson used by some of the best investors in the world right here.

Utility stocks are known for their consistency. Companies that provide electricity, gas, and water have “locked in” customers. While it isn’t flashy… folks have no choice but to pay for these services. And today’s company is a great example of how these stocks can produce steady returns…

FirstEnergy (FE) is a $26 billion utility titan, owning 10 electric companies across the Midwest and Mid-Atlantic regions. With more than 269,000 miles of distribution lines, those businesses serve 6 million customers. That’s a lot of people locked into using FirstEnergy’s services… and that means steady income. In the second quarter, FirstEnergy reported earnings of $308 million, up from $134 million in the same quarter last year.

As you can see, FE’s shares are in a consistent uptrend. They’re up 54% over the past two years. And that trend should continue, as people continue to turn on their lights… 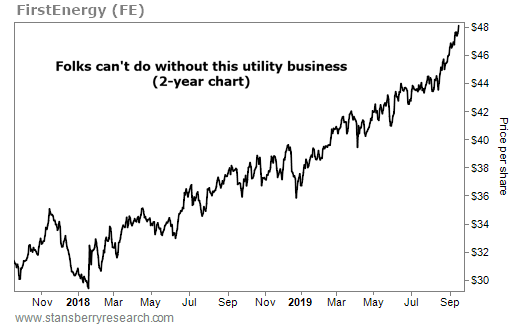