Shipping giant FedEx (FDX) is struggling... but not for the reason you might think.

While folks are shopping more in person and ordering less online than they did a year ago, shipping volumes aren't the main source of pain for FedEx. It's the opposite, actually...

FedEx's workers can't keep up with all of the packages that need to be sorted and shipped.

As an example, at one of FedEx's largest sorting hubs in Portland, Oregon, managers have been scrambling to get packages to their customers on time. The workers at the facility can't sort through them fast enough, leading to delays.

Because of this, FedEx has diverted roughly 25% of the packages bound for Portland to other sorting facilities. It has also added more trucking routes and even hired third-party transportation companies to help move packages in a timely manner.

All of this means it takes more time for the customers get their packages... there are more package miles, which could increase the chance of something going wrong... and of course, it costs more money.

You see, the sorting facility in Portland only had 65% of the workers needed to handle its regular package load. And Portland isn't an outlier, either. Across the board, it's the same thing...

It's a story we've seen in all areas of the economy this year... with unexpected impacts for investors.

On a recent call with analysts, Chief Operating Officer Raj Subramaniam explained that FedEx has had to reroute more than 600,000 packages a day because facilities don't have enough workers. And this has caused the business to take a major financial hit...

In the company's most recent quarter, FedEx added $450 million in costs thanks to the shortage. That includes money for overtime pay, higher wages to attract workers, and extra spending on transportation.

FedEx has been actively trying to hire more workers. Not only has the company raised wages, it also offered additional incentives for weekend shifts. And those costs have been adding up...

In the most recent quarter, salaries and employee benefit expenses rose 13%, including 27% in its Ground division.

Still, throwing money at the problem hasn't helped much. Workers have simply been hard to come by.

The labor shortage contributed to an 11% plunge in profits during FedEx's latest quarter. As a result, shareholders have been jumping ship. The stock fell 9% after earnings were released... 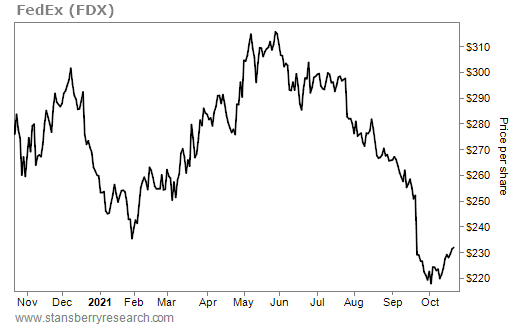 FedEx isn't the only company dealing with a labor shortage. Countless firms across a broad range of industries need workers today.

We can see this on the chart below. It takes the unemployment level and divides it by the number of job openings... In other words, it's a ratio that shows how many unemployed Americans there are per job opening.

The dotted line means that for every person looking for work, one job is available. When you go below the line, there are more open jobs than unemployed folks to fill them.

As of August, there were about four unemployed Americans for every five job openings (or a ratio of 0.8). Take a look... 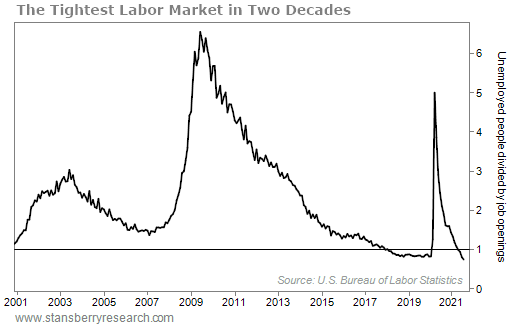 If you want a job and are willing to put in a minimal amount of effort... it's likely that you can get one.

Another way to see how tight the labor market is right now is by looking at the percentage of folks who voluntarily quit their jobs. Most of the time, people only quit their jobs when they can find higher pay somewhere else.

In August (the most recent month for which we have data), 2.9% of the workforce quit their jobs. That's a multidecade high. Take a look... 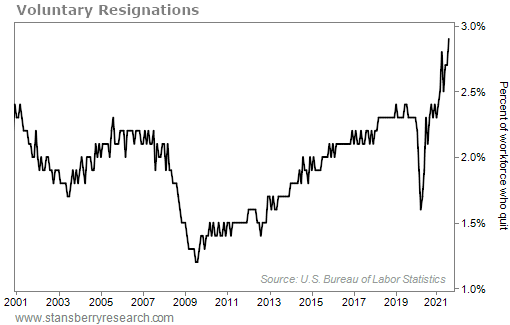 Businesses are getting rid of fewer workers, too. According to global employment and staffing firm Challenger, Gray & Christmas, U.S. companies announced only 15,723 job cuts in August – a decrease of 17% from a month earlier.

It's also the fewest since June 1997... a 24-year low. And even September's total, which rose slightly, was 85% lower than the same month last year.

Now, you'll hear conflicting opinions about what's causing the worker shortage. Folks may not be taking open positions because of...

I think the current tight labor market is caused by a mix of all these factors. But one thing is certain... As the economy has reopened and many businesses have returned to in-person work, it has created ideal conditions for a historically tight labor market.

Here's the key for us as investors...

If I would have told you one year ago that we'd have this problem – the problem of having not enough workers to fill open roles – you probably wouldn't have believed me. You might have even thought I was joking.

Millions of Americans were laid off a year and a half ago. And it seemed like the pandemic could lead to an economic depression that would last for a long time.

But the unthinkable happened instead... The economy has come surging back. More companies are hiring, which is great. And folks are out spending the money they saved during the pandemic.

In short, companies like FedEx are facing challenges – for now. But it's always hard to bet against the stock market when the economy is thriving.

That's what we're seeing today. So while you might be scared that we're entering uncharted territory, this tight job market is likely a good sign for the economy. And that means you need to have some money invested in stocks today.

Editor's note: The economy is in a better place today than anyone would have imagined in 2020. But while Doc isn't predicting a market crash around the corner, he's shedding light on a danger that he says is far more insidious... a financial reckoning that's coming for American retirees. And for some, it could mean that life will never get "back to normal"... Get the full story here.

Even though folks are headed back to the office, people are still working from home more than ever before. And no matter how much closer to normal we get, it's clear that some trends are here to stay... Read more here: The 'New Normal' of Working Life Bodes Well for These Stocks.

"Investors should be giddy in this environment," Steve writes. But instead, folks are indifferent to the gains we're seeing in the market. And that could mean even higher stock valuations ahead... Get the full story here: Why I No Longer Expect a Market Crash This Year.

Regular readers know that some of the most “boring” businesses can still bring in healthy returns. Whether it’s selling plumbing and HVAC or providing auto parts, these companies can be solid performers – often without spending capital on big changes or innovations. Today’s company isn’t glamorous or exciting, but its shares are marching higher…

Clean Harbors (CLH) is a $6 billion leader of environmental and industrial services in North America. It does things like recycle and dispose of hazardous waste, clean up chemical spills, and re-refine used oil. It may not be sexy, but cleaning up waste is a reliable business model… In its most recent quarter, Clean Harbors reported revenues of $927 million, up 30% over the same quarter last year. And income from operations grew 83% year over year to $110 million.

CLH has doubled in price over the past year… And the stock recently hit a new all-time high. As Clean Harbors continues to lead its industry, shares of this “boring” business should keep climbing… 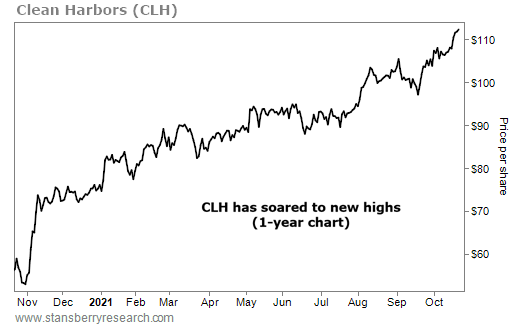