This Is the Worst Emotion You Can Have Right Now
By Brian Tycangco
Thursday, February 6, 2020

When you talk about investing in China, there's always something to fear.

For the last couple of years, it was trade. The U.S. and China were locked in a tariff battle until last month. It didn't seem like you could make any money in Chinese stocks until the problem was resolved.

That idea turned out to be silly, though. China's stock market was up 24% last year when the trade war was in full force.

Now, we have another big fear in this part of the world...

You can't watch the news without hearing about the new strain of coronavirus spreading throughout China. In less than a month, it's already sickened thousands and killed nearly 500 people.

People are scared. And that fear has spread to the markets. But history shows that when it comes to Chinese investments, you shouldn't give in to this emotion today.

Recently, the virus reached international shores, including a handful of cases in the U.S., Japan, and the rest of Asia.

So much so that they've locked down more than a dozen cities, keeping people from leaving and putting as many as 50 million Chinese in de facto quarantine.

To put that in perspective, that's twice the entire population of Australia.

For the first time in history, Beijing also extended the weeklong national holiday celebrating the Lunar New Year. They did this to keep tens of millions from traveling while the government tried to get a handle on the spread of the virus.

As a result, both the Shanghai and Shenzhen stock exchanges were closed for more than a week. But while they were on an extended vacation, markets around the world were already reacting.

Hong Kong, which is most at risk from the virus due to its proximity to China, saw a 5.7% decline in its stock market.

None of this is new. It's a typical reaction to something unknown and uncertain. And it comes at a time when markets have been hitting one record high after another... and valuations are getting expensive.

I haven't seen this level of fear in the markets since the sell-off in December 2018.

But if you look at history, it's clear this virus shouldn't be a cause of long-term concern for investors in China...

SARS killed 774 people in 37 different countries before it was contained. And as someone living in Asia at the time, the memory of it is seared in my mind.

My most vivid memory of the SARS fallout was its impact on the financial markets in Hong Kong...

Fear of infection turned Hong Kong's busy commercial centers into ghost towns. Tourism ground to a halt. Local residents only went out to buy food and necessities, and kids stopped going to school.

Within five months, the Hang Seng Index lost 18%. It was the most hated – and feared – stock market in the world.

But guess what? After just three months, that same index recovered all of its losses.

About a year later, it was up another 40% from its 2003 lows. And while economic growth was in the low single-digits, Hong Kong's gross domestic product ("GDP") went up both years.

At the time, SARS seemed like the end of the world. And make no mistake – it was devastating for anyone directly affected. But it didn't have the economic impact that many would have expected.

There have been no new cases of SARS reported since 2004. But today's outbreak comes from the same family of viruses, and it has folks up in arms.

So will this new strain be as deadly as SARS? Right now, nobody knows for certain.

What's important to remember is that these situations can scare the bejesus out of the markets. But if history is a guide – and it often is – it should be a short-term issue for our investments.

Remember, China was one of the world's best-performing markets last year despite the trade war. This year, it's off to a roaring start thanks to the phase one trade deal.

And while this virus is the current reason to fear China... it's nothing but a short-term fear.

"The whole economic story on China is wrong," Vic Lederman says. Despite the popular belief that China is headed for a major economic slowdown, it is still showing strong signs of growth... Get the full story here: I Haven't Been Forthright Enough on China.

"Most of the recent news about China has been negative," Chris Igou writes. Chinese debt may sound like a ticking time bomb that threatens to collapse the country's whole economy. But that misperception could lead to triple-digit gains from here... Learn more here.

Market Notes
LASTING GAINS IN 'THE WORLD'S MOST LEGENDARY RACETRACK'

Regular readers know that investing in addictive products and services can be a profitable strategy. Like it or not, from fast food to video games, folks keep coming back to get their fix. And today’s company profits from the thrill of winning big…

Churchill Downs (CHDN) started off in 1875 with the first-ever Kentucky Derby. Today, in addition to hosting the time-honored race, it owns racetracks and casinos across several states. And it owns TwinSpires, the largest platform for placing online horserace bets in the U.S. As folks keep returning to satisfy their gambling cravings, Churchill Downs benefits… It recently reported solid third-quarter earnings, with sales up 38% year over year.

As you can see, CHDN shares are in a long-term uptrend. They’re up around 380% in the past five years, accounting for dividends and splits. And as folks keep placing bets and going to horse races, that trend should continue… 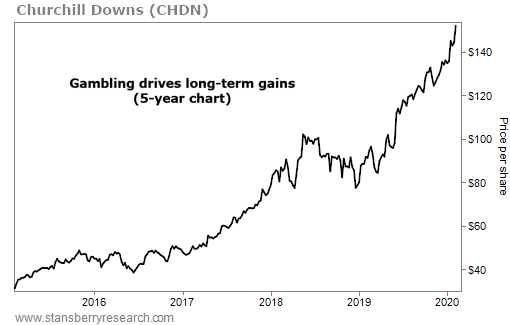