This Precious Metal Could Soar 50% by Year-End
By Brett Eversole
Tuesday, July 19, 2022

Nothing booms and busts like the commodity market. And it has been booming for the past two years.

The benchmark commodity index has doubled since the pandemic bottom. Now, futures traders are darn bullish on most commodities.

A certain precious metal is an exception to that trend...

This metal hasn't been booming, unlike many other commodities. It's down roughly 40% from its March high. And speculators have thrown in the towel as a result.

This bearish sentiment tells us that the next big move higher is on the way, though. It could mean 50% gains by year-end, based on history... and triple-digit returns over the next 18 months.

With inflation running rampant, everyone wants to know what gold is doing today. But gold isn't the only precious metal on the block.

Palladium surged roughly 200% in the year and a half leading up to the pandemic. It has been volatile since, but it hasn't gone anywhere... until recently.

The metal peaked in March and then crashed 40%. And futures traders are banking on more losses.

We can see it through the Commitment of Traders ("COT") report for palladium. This is a weekly look at the real-money bets of futures traders. And it's one of the best ways to see sentiment changes in commodities.

In palladium's case, these traders are incredibly bearish. Take a look... 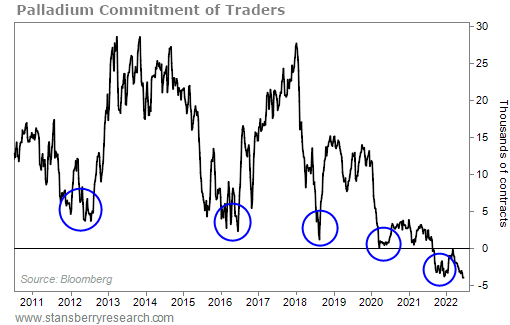 We recently hit the lowest reading on record. And similar lows have presented fantastic buying opportunities for palladium.

The chart above shows those setups. Here's what palladium returned in each case after bearish futures bets bottomed...

Palladium has a track record of staging large, sustained booms after sentiment hits a multiyear low. They typically take one to two years to play out, except for the quick rally we saw after 2021. And in four out of five cases, they resulted in more than 50% gains (sometimes much more).

Of course, sentiment could get worse from here. And palladium hasn't started rising yet. So it's not safe to buy right now.

But this commodity has gotten cheaper lately... And more important, it's one of the few commodities that traders hate the idea of owning. That means we're likely on the verge of a major rally.

If prices reverse soon, we could see a 50% boom by year-end. And triple-digit upside is possible. You just need to wait for the uptrend before acting.

Futures traders are extremely bearish on palladium right now. But if we follow the crowd, we could miss out on massive gains once the precious metal recovers. We saw a similar signal in the metal last year, before it soared into early 2022... Learn more here: This Beaten-Down Commodity Is About to Soar.

"Falling prices are setting us up for future gains," Brett writes. Many investors are pulling their money out of stocks right now. But if you have a long-term investment horizon, that may not be the best move today... Read more here: This Stock Market Decline Has a Silver Lining.